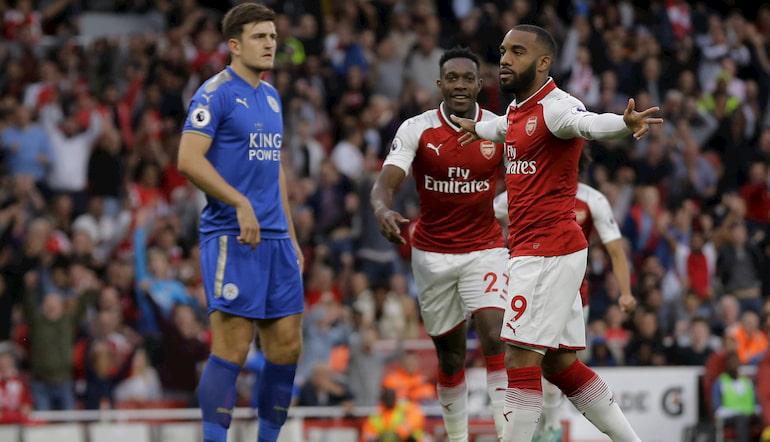 The 2020/21 Premier League opening weekend is approaching quickly. Teams are already heading off on their lucrative preseason tours, while the higher-ups prepare the squad and look to make season-altering acquisitions.

Each team approaches the new campaign with fresh optimism. Whether it’s a new manager in place, a raft of exciting signings or just the hope of a new season, every team has dreams on opening weekend.

In the history of the Premier League, there have been plenty of iconic opening weekend fixtures. Some have been the start of a core, others the beginning of a demise, and some have just been brilliant matches.

In this article, we’ve taken a look at seven of the most famous opening weekend Premier League fixtures…

In the first ever Premier League weekend, the league was under the spotlight after a record TV deal. A headline-making fixture was required amid concerns that it was one great leap into the dark.

At Highbury, Arsenal and Norwich delivered. Well, in truth, it was Norwich who provided the thrill. The Canaries were 2-0 down at half-time, but turned it round in the second half, scoring four unanswered goals.

Arsenal were one of the favourites for the inaugural Premier League crown. Norwich had narrowly dodged relegation in 1991/92. It was the sort of upset Sky were hoping for as the Premier League began.

Manchester United’s defeat against Aston Villa in 1994 provided us with one of the most famous clips of punditry in Premier League history.

Alan Hansen was on Match of the Day, his analysis was: “You can’t win anything with kids.”

The kids in question in this match were Gary Neville, Nicky Butt, Phil Neville, Paul Scholes, Ryan Giggs and David Beckham. The first five started, while Beckham came off the bench and snatched a consolation goal for Alex Ferguson’s side.

United went on to win the Premier League and FA Cup. Those kids were pretty key.

Liverpool and Chelsea met on the last day of the 2002/03 season. A place in the Champions League was on the line.

Ever-entertaining winger Jesper Gronkjaer led Chelsea to victory in the spring of 2003, earning the Blues a Champions League berth, but the knock-on effect was much more significant.

That summer, a Russian oligarch by the name of Roman Abramovich bought Chelsea. Abramovich may well not have done so if Chelsea had missed out on Champions League football.

The investment flooded into the squad, and five debutants started on the opening weekend of 2003/04. Chelsea snatched a late victory through Jimmy-Floyd Hasselbaink to get the Abramovich era off to a winning start.

Blackpool weren’t meant to make it to the Premier League. Their ascension to the top flight of English football was a glorious underdog story.

A meeting with Wigan on the opening weekend wasn’t the glamour fixture they might have been hoping for, but it turned out to be one of the most memorable opening weekend victories in Premier League history.

Blackpool battered Wigan 4-0, putting them top of the Premier League for a few hours. And what a few hours those were for the Lancashire side.

This game was home to some of the worst – and perhaps funniest – defending in recent Premier League memory. Alberto Moreno, Rob Holding and Calum Chambers all had, let’s say, challenging afternoons.

Liverpool were 4-1 up just after the hour mark as Sadio Mane put in a scintillating performance on his debut. Arsenal found a couple of late goals as they flirted with a comeback but ultimately fell short.

The quality wasn’t high, but it was bonkers.

It was 1-1 after five minutes with Shinji Okazaki cancelling out Alexandre Lacazette’s goal almost immediately. Jamie Vardy put the Foxes ahead on the half-hour mark before Danny Welbeck equalised on the stroke of half-time.

Vardy got his second after the break as Leicester tormented Arsenal on the counter. Aaron Ramsey and Olivier Giroud scored in the 83rd and 85th minutes respectively to turn the match on its head and snatch an improbable win for the hosts.

Antonio Conte’s Chelsea cruised to the 2016/17 Premier League title. As is often the case at Stamford Bridge, though, things weren’t calm for too long (and there were signs of unrest in the closing weeks of the 2016/17 campaign).

The match was a disaster from start to finish for the reigning champions. Gary Cahill was sent off inside the first 15 minutes, and Burnley took a 3-0 lead before half-time thanks to a Sam Vokes brace and a Stephen Ward goal from left-back.

The hosts fought back in the second half, with Alvaro Morata scoring and David Luiz making it 3-2 in the dying embers of the game, but they fell short of a comeback.

Oh, and to rub yet more salt in the wounds, Cesc Fabregas was sent off for a second yellow. Will Frank Lampard’s first season as Chelsea boss get off to a better start? Find out in our Premier League betting news and tips.