Bright Future Ahead For Tennis After The Big Three?

What does the future hold for men's tennis after the Big Three? Our blogger looks at the breakout stars... 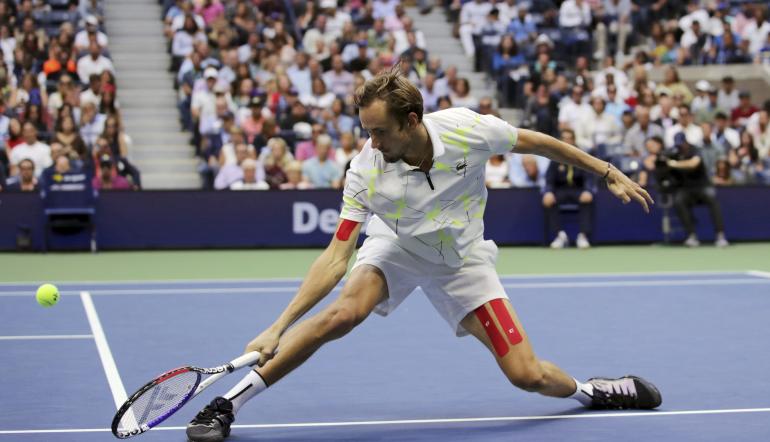 The wait for the big three to be succeeded atop men’s tennis has been a long one. Novak Djokovic, Rafael Nadal and Roger Federer’s grasp on supremacy remains strong. Nadal might be the best ever, Djokovic and Federer have a claim to that same throne.

Whether it’s their greatness or the failings of the chasing pack that have caused it, the outcome is the same: the top of men’s tennis has looked the same for much of the last decade (and beyond if we include Federer’s noughties dominance).

Since the start of the 2006 season, 56 Grand Slams have taken place. Outside of the big three, only Stan Wawrinka and Andy Murray have won more than one with a grand total of six between them. Marin Cilic and Juan Martin del Potro have won one each.

Challengers Daniil Medvedev and Dominic Thiem both reached Grand Slam finals in 2019, though they were swept aside by Rafael Nadal in the US Open final and French Open final respectively.

For all the young talent on the tour, losing in Grand Slam finals puts Thiem and Medvedev a step ahead of their peers.

Stefanos Tsitsipas and Alexander Zverev have yet to prove themselves on the Grand Slam stage, while Nick Kyrgios remains a controversial figure rather than a contender. Borna Coric has only made it to the fourth-round twice, and never gone further.

Matteo Berrettini had a breakthrough of sorts with a run to the last four in New York, but has plenty to prove. A last eight drubbing at the hands of Thiem at the French was Karen Khachanov’s best Grand Slam performance.

The youngest player in the top 100, Felix Auger-Alissiame, has a long way to go, but the upside is definitely there after beating Tsitsipas at Indians Wells and Queen’s.

A quick glance at the tennis odds tells us how far the aforementioned group are behind the big three. The big three are well clear in the outright Australian Open betting with Medvedev, off the back of his US Open displays, the closest competitor.

The 23-year-old Russian has worked his way into that position and the number four spot in the rankings.

Players have done that in the past, it’s the next step that is the greatest challenge, and no player other than Murray has elbowed his way into the group in recent memory.

Fighting against less than favourable New York crowds, Medvedev proved his mettle at the US Open.

Grand Slam tennis is as much between the ears as it is about winners and big serves – throughout the fortnight, Medvedev held his nerve and stuck to his gameplan in a way that many of the ‘new generation’ have failed to do.

Zverev is yet to make that leap. Excuses followed after a disappointing US Open exit. Twice a French Open quarter-finalist, the lanky German doesn’t have the advantage of being a specialist on a surface.

His ceiling is high as a result, but defeating the current mental block is his main obstacle. Winning the ATP Finals in 2018 showed the player that Zverev could become – translating that from best-of-three indoors to a Grand Slam fortnight isn’t a small task.

Since breaking through at Wimbledon in 2018, Tsitsipas’ fortunes have been mixed at Grand Slams, much like Zverev. His surge up the rankings has been great news for tennis in Greece, at least.

After an epic defeat to Wawrinka at the French Open, Tsitsipas had a troubled remainder of 2019. First round exits at Wimbledon and the US Open were disappointing, but not entirely surprising after his form declined drastically.

Still in the top 10 in the world, though, Tsitsipas’ start to the 2020 season could prove to be definitive in his career. An entertainer, and with a game that can thrive on all three surfaces, the sport benefits from Tsitsipas at his best.

Cut down the unforced errors, and he’s got Grand Slam-winning potential. His 16/1 to win Wimbledon in 2020 is the same price as Medvedev.

Clay-court specialist Thiem is 26 years old and running out of time to prove himself as Nadal’s Roland Garros successor.

Back-to-back French Open final defeats have shown that Thiem is a force to be reckoned with, but conquering the King Of Clay in Paris is something else.

With only one quarter-final appearance at Wimbledon, the US and Australian Opens, clay is Thiem’s best route to Grand Slam glory – although he has won four ATP titles on other surfaces.

Age will eventually catch up with Nadal and Djokovic in the same way it has Federer. Even as Federer has notably aged, however, the big three is intact, and it is up to the current crop of players in their young twenties to force the end of an era.

A changing of the guard might not be too far away, but it has felt like that before and no one has managed to consolidate themselves as a consistent Grand Slam contender.

Medvedev has the platform after his US Open final loss, Thiem has toppled Nadal on clay in the past, and there’s no doubt that Tsitsipas and Zverev have the talent.

Others have shown glimpses. Consistency is the key, not just through a fortnight, but across a 12-month period. A Grand Slam doesn’t have to follow in 2020 for any of these players to alter their reputation.

Keeping standards high, being there into the second week of Grand Slams, can take a player from a promising talent to one of the world’s best. Medvedev is in pole position right now, though that could all change between now and the end of the Australian Open.

888sport.com, serving up every tennis market you could want