The 10 Greatest Wimbledon Finals Of All-Time

Our tennis expert looks at 10 of the greatest Wimbledon finals of all-time - which matches have we missed? 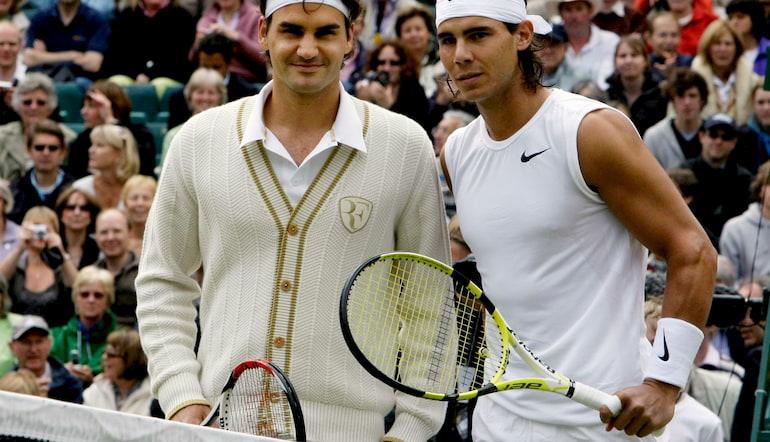 There will sadly be no Wimbledon in 2020, leaving tennis fans deprived of the most prestigious tournament on the planet.

With no live tennis to enjoy, we have taken a look back at the 10 greatest Wimbledon finals of all-time…

It was Marion Bartoli’s 46th Grand Slam – she had only made it to the quarter finals on five previous occasions, including a trip to the Wimbledon final in 2007. The fortnight at Wimbledon in 2013 was without question the greatest tennis of Bartoli’s career.

Bartoli was perfect through to the final, not dropping a set. A straight sets victory over Sabine Lisicki completed a magical two weeks for the Frenchwoman, who announced her retirement from the sport just a couple of weeks later.

Hardly a tennis betting favourite before the tournament, Bartoli’s 2013 win was a wonderful Wimbledon story.

Steffi Graf and Arantxa Sanchez Vicario had swapped the number one spot in the rankings six times in 1995 before they met in what turned out to be a classic Wimbledon final.

The standard was very high. The two premier tennis players in the world going head to head, the turning point came at 5-5 in the deciding set with Vicario serving. Graf eventually broke after 32 points and held serve to win the match.

Still a teenager, Steffi Graf headed into the 1988 final against a much more experienced opponent. Martina Navratilova was a six-time champion and had got the better of Graf in the final a year previous.

Despite losing the first set, Graf came back to win the match. No one has ever had as successful a year as Graf’s 1988, when she won a Golden Slam (all four Grand Slams and Olympic gold).

The tennis wasn’t the highest level, but the 1975 final went far beyond the standard on the court.

Arthur Ashe and Jimmy Connors did not get on. Connors had unleashed a multi-million dollar libel suit at Ashe for comments about Connors’ refusal to join the United States’ Davis Cup team.

There was tension ahead of this matchup – something seldom seen ahead of a Wimbledon final. Into his thirties, Ashe was the underdog against the unstoppable Connors.

Anything other than a straight sets Connors win seemed improbable, but Ashe stifled his opponent with slices and delicate shots, frustrating Connors’ power game. Ashe’s first, and only, Wimbledon final ended in a four-set win.

The longest singles final in Wimbledon history lasted just shy of five hours on an extraordinary day for British sport.

The British Grand Prix and Cricket World Cup Final were taking place in parallel, and Novak Djokovic and Roger Federer did all they could to keep Wimbledon as the centre of attention.

They exchanged the first four sets, Djokovic winning the first and third on tie breaks, Federer winning the second and fourth more comfortably.

The pair could not be split in the fifth set, going all the way to a final set tie break (a rule that was introduced in 2019), which Djokovic won 7-3.

Roger Federer, the most successful man ever at the All England Club, has been on the wrong end of the two greatest finals.

Rafael Nadal and Federer were at the height of their powers, they were miles clear of the rest of the world when they met in 2008 and the final delivered on the promise.

Nadal was steely determined for his first Wimbledon title. To get it, he had to defeat Federer, a man who had been almost faultless on the grass of southwest London in recent years.

The Spaniard took the first two sets. A rain delay gave Federer a chance to regroup. Looking to make history, the incomparable Swiss levelled it up.

The night sky settled in and Centre Court was treated to a dramatic final set, which Nadal eventually won 9-7.

The world’s two best players, Bjorn Borg and John McEnroe, were barely comparable as people. Their matchups were a clash in styles, the fiery McEnroe was on the wrong end of the match in 1980 in a five-set thriller.

Despite it going all the way to 8-6 in the fifth, it’s the fourth set tie breaker that this match is best remembered for.

Going for 34 points and 22 minutes, McEnroe fought and fought against Borg, holding off multiple championship points. It was captivating, and arguably the most intense period of tennis ever played.

It was a long, long wait for a British man to win Wimbledon. Andy Murray had lost the final to Roger Federer in 2012, and although he had an Olympic gold and a US Open title to his name, Wimbledon was the holy grail.

Murray and Novak Djokovic were the top two players in the world ahead of the 2013 tournament.

With immense pressure and an expectant Wimbledon crowd, the Scot cruised to a straight set victory over his long-time opponent to become the first British man since Fred Perry to hold the Wimbledon trophy aloft.

While injuries have plagued Murray, Djokovic is back at the top of sports betting the best part of a decade later.

Margaret Court and Billie Jean King played a record number of games in the 1970 final.

Court’s 14-12, 11-9, victory put her on course to complete a calendar Grand Slam, which she did with victory at the US Open a few months later.

It was a battle for both players, playing through ankle and knee injuries respectively in a marathon of a match.

King saved match points, digging deep in the biggest moments as fatigue set in. Court eventually won it on her seventh match point to win her third Wimbledon title.

Venus Williams was seeded 14th for the 2005 edition of Wimbledon. When Venus defeated Lindsay Davenport, then world number one, in an epic final, she became the lowest seeded woman in Wimbledon in history to win the tournament.

A tie-break in the second set went Venus’ way, setting up a decider. Davenport began suffering with a back injury and missed a match point opportunity on Williams’ serve.

The final set dragged on, the match lasting almost three hours, with Williams eventually winning it 9-7.

For all the markets for Wimbledon - 888 Sport