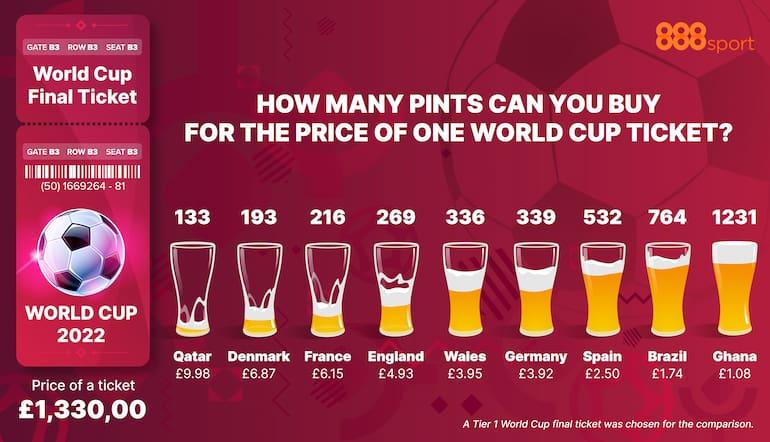 With just a few months to go before the World Cup, 888sport has revealed how many pints fans from each of the 32 competing nations could buy for the price of one World Cup Final ticket.

So, is it worth spending almost £1,500 just in case your team makes it, or would you get more value for your money watching the big game at home with a 12-pack?

This year's World Cup Final will be held at the Lusail Stadium in Doha, Qatar where drink prices will be sky high and spectators will be charged almost £10 a pint in designated fan zones.

Footie fans will pay whopping £9.98 a pint at World Cup in Qatar https://t.co/cO55LH5JDQ

As favourites, Brazil and France (5/2 fav and 11/4 to reach the final) supporters will see the value in splashing out for a ticket and the potential to see their team lift the trophy, but what about everyone else?

After four consecutive losses and no goals in open play, England are rapidly sliding down this year’s list of contenders with the odds of them being a final contender currently sitting at 4/1, so Staying Home is sadly more likely than its ‘Coming Home’!

So, with a pint of beer more than double the price in Qatar compared to England, 888 Sport research shows that Three Lions fans are better off sticking to their sofas with a 12-pack and ‘enjoying’ the games in comfort than spending their hard-earned money on a final ticket.

Welsh fans, however, are in for a hat trick. Not only have they qualified for the World Cup for the first time in 64 years (66/1 to make it to the final two) but their beers are also cheaper than their counterparts in the UK at only £3.95 a pint.

This means Dragons fans can buy 336 pints for the price of a ticket if they opt to stay at home, while permanently disappointed Three Lions fans can ‘only’ buy 269 pints at £4.93 each.

Arch rivals and four-time winners Germany will be pleased to know they also beat the English when it comes to the average price of a pint, paying £1.01 less.

So, their supporters can kick back and have a well lubricated tournament on home turf. But England fans can always hold onto the past glory of that epic 1966 final right?

888 investigated the price of a World Cup final ticket (individual match ticket, category 1) and the price of a pint in the 32 competing World Cup Nations. The results were pulled together into a table and visual (above).

Football Tips
About the Author
By
888sport