Our Ascot Racecourse guide ahead of the biggest horse racing meetings in 2021. Will you be at Ascot Races this year? 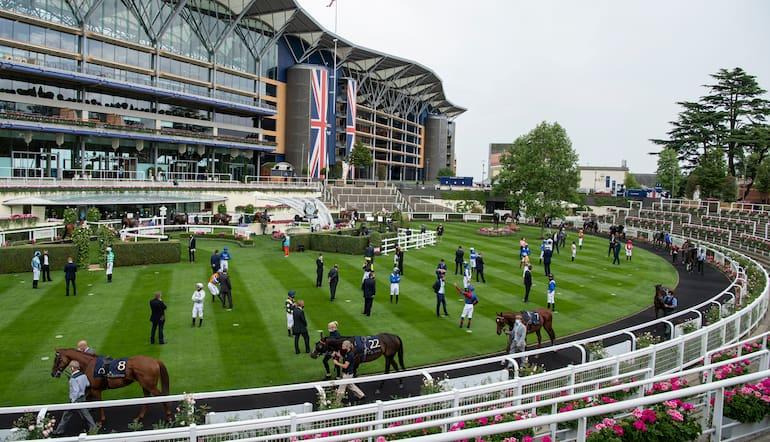 There’s never a dull moment in the yearly racing cycle of Ascot Racecourse, with the Berkshire racecourse being right up there as one of the most utilised Grade One tracks in the United Kingdom.

From the pomp and ceremony of the historic Royal Ascot meeting, one of the biggest events for betting on horse racing, the enthralling Champions Day, through to all of their top class National Hunt races, you’re never that far away from a forthcoming Ascot fixture whenever you look in your diary.

Legend has it that Queen Anne rode her horse from Windsor Castle to the field where Ascot racecourse now stands and uttered something along the lines of “this would be a fine place for a horse race”.

Well those initial regal thoughts didn’t take too long to come into fruition as the very first race to be run at the venue, “Her Majesty’s Plate”, was held on 11th August 1711 and seven horses competed.

In 1785 the Straight Mile part of the track was built, thus attracting quicker horses that could now race over trips that ranged from five furlongs up to a mile. It was a great opportunity for the speedier thoroughbred horses.

Parliament intervened in Ascot’s future in 1813, when they passed the Act of Enclosure. They ruled that Ascot Heath must always be maintained as a public racecourse.

This Act ensured that the land could constantly be used to entertain the British public without any fear of the venue being acquired for any other purpose.

The Royal Meeting dates back to 1825, when racing at the track during the third week of June became known as the “Royal Week” because of the Royal’s being there to enjoy the racing en masse.

Since that date members of the Royal family started attending the meeting with a horse-drawn procession taking place before racing commenced – a tradition that still takes place to this day.

The procession was an instant hit as the commoners loved to see the Royals in person, in a formal setting, enjoying themselves.

When the Ascot Gold Cup was added to the schedule in 1807, this more or less ushered in the Royal Ascot structure as we know and love it today.

Unbelievably Royal Ascot was the only fixture held at the track for over a century, until 1939. After this time additional events started to take place at the venue throughout the calendar year.

The track itself was developed over the years but it was in 1961 that it got its first major facelift with the new Queen Elizabeth II Grandstand being built at a cost of £1 million.

The next big overhaul was in 2004, when the track closed for two years for a £200 million redevelopment during which time the Royal Meeting was re-routed to York.

In 1965 the first National Hunt meeting took place at the venue after some strong resistance in certain quarters. The Duke of Norfolk was even quoted as saying that Jumps racing would take place at Ascot Racecourse “over my dead body”.

Ascot’s Jumps season is spearheaded by a trio of Grade 1 contests – The Long Walk Hurdle in December, the Clarence House Chase in the New Year and the Ascot Chase in February.

Other Jumping highlights include a pair of Grade 2 races in late November - The Coral Hurdle and the 1965 Chase.

In 2011 British Champions Day was born at Ascot. It has now become Flat racing’s official end-of-season championship meeting and it is an eagerly anticipated finale for many.

Ascot Racecourse announced earlier in the year that the Queen had consented to extending the number of daily races at Royal Ascot 2021 to seven. This is a permanent move going forward so horse racing commentators must get used to a greater schedule.

The Copper Horse Stakes, The Palace of Holyroodhouse Stakes, The Golden Gates Stakes and the reinstated Buckingham Palace Stakes were all added to the 2020 programme.

All of these have been retained, plus an additional new race - The Kensington Palace Stakes in order to make up the new quota of seven races per day.

Ascot is a galloping track in character and since its redevelopment, the turn into the straight has become more sweeping, especially favouring prominent front-runners.

Currently the ground in the straight tends to drain quicker than the rest of the course, lending itself to various going descriptions.

There is no real draw bias at Ascot but punters should be alert to any changes in the going and be guided by prior results, especially if the meeting is being held over more than one day.

The National Hunt races hosted here are over a galloping and fair track but the fences are stiffer than at most N.H courses so a sound jumper is required in all of the Chase events.

Well known for its sartorial elegance, Royal Ascot has some very unique style guidance for racegoers in the various enclosures at the racecourse.

Whether you’re in the Village, the Windsor, the Queen Anne or the Royal Enclose there are very specific rules in each area which you can find HERE.

You can find Ascot horse racing tips here at 888sport, as well as via one of the following: Jockey Club App, Racing Post, Evening Standard, Bracknell News, Mull It Over Blog.

Official tickets will go on sale in due course, register your interest HERE.