Baaeed v Frankel: Making A Case For Both Horses

Who comes out on top - Baaeed or Frankel? Racing writer Steve Mullington gives his view on the debate 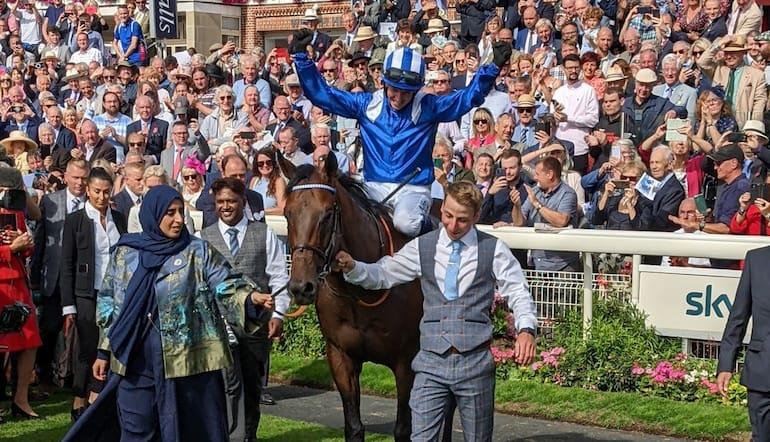 It was almost inevitable that comparisons between Baaeed and Frankel were going to be made once racing’s current star – Baaeed, started his astonishing winning run, but is it fair to compare the two – it’s a tricky one!

The case for Frankel

Frankel was for many the greatest racehorse in history and his flawless 14-races unbeaten career was the catalyst for many horse racing online bets.

His trainer, the late Sir Henry Cecil, who was well qualified to speak about him said:  "I cannot believe in the history of racing that there has ever been a better racehorse".

Frankel’s (140) racing career included 10 Group 1’s, Sea The Stars (136) was unbeaten in eight after his debut defeat and he chalked up 6 Group 1’s and now his offspring Baaeed (135) is up there with the all time greats, taking his tally to 10/10 (6 Group 1’s) after landing the Juddmonte International at York.

It's the Juddmonte International next week, which means I can showcase what I think, is the best bit of footage ever filmed at a racetrack.

Frankel breezing past 4 time Group 1 winner, St Nicholas Abbey like he's not even there. Magicpic.twitter.com/Zl1fjEyWoh

In an article written by speed figures expert Simon Rowlands titled “Frankel: The horse who beat the clock as well as his rivals”, Rowlands explained:

"Frankel's time figures lagged behind his ability, but his 136 peak time figure – achieved in both the 2000 Guineas and the International Stakes – is the best by any horse this century.

"What's more, he is responsible for four of the best six time figures of the century, with this year's efforts in the Lockinge Stakes and Champion Stakes weighing in at 134.

"As with form-based measures, it's not just that Frankel did it: he did it time and again."

The case for Baaeed

It is interesting to note that Baaeed finished his 3-year-old season with a Timeform rating of 130, which was some way behind Frankel (143) at that stage of his career.

You can however cut Baaeed a little bit of slack in that respect as he was a late foal and his trainer William Haggas considered him too immature to race as a juvenile.

Since the inception of the World’s Best Racehorse Rankings in 2004, there have actually been three horses with extraordinary ratings, the third being Baaeed’s father – Sea The Stars who should also rightly figure in this whole “who is the greatest” debate.

Just like Baaeed, Frankel’s stunning performance in the Juddmonte International gave rise to the speculation that he would be entered for the Arc but Khalid Abdulla’s racing manager Lord Grimthorpe pulled the plug on that idea.

🏆 Baaeed wins the Juddmonte International Stakes and is still undefeated!

Straight after his York victory Baaeed’s connections appeared adamant that his four-year-old campaign would be a carbon copy of Frankel’s and his last ever race would be in the Champion Stakes, however after much persuasion they appear to be leaning towards an Arc bid – weather permitting!

The deadline to supplement a horse into the Arc is September 28th at a cost of €120,000. If Baaeed was to go to Paris and lift Europe's top middle-distance event, many people would be of the view that Baaeed was ultimately a better “all-rounder” than Frankel.

However, I’m confident that whatever transpires in the next few weeks, the whole Baaeed versus Frankel debate will rumble on and on for years to come.

If you are fed up with all this Flat chat and yearning for the return of the Jumps season proper then please check out our current Grand National betting.