We look at the biggest stadiums in Major League Baseball, starting with the smallest capacity and ending with the highest MLB venue 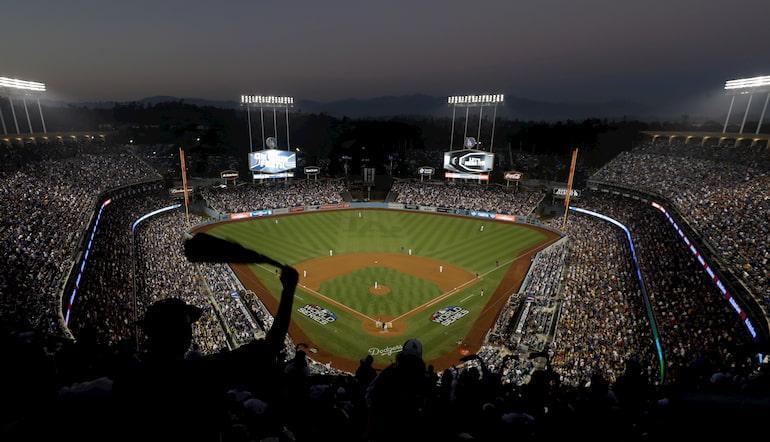 The 2020 season has changed the look of MLB stadia. There’s no atmosphere without the fans, but plenty of these venues are still spectacular through a combination of history and aesthetics.

The biggest MLB stadiums can rival the top sports arenas in the Premier League, holding over 50,000 spectators.

Not always full, of course, MLB parks have a bigger impact on the game itself than in any other sport. The dimensions, the climate, are important factors to take into any baseball betting decision.

From smallest to biggest, we have ranked MLB’s permanent stadia, excluding Toronto’s 2020 venue in Buffalo.

Tampa Bay’s Tropicana Field gets more than its fair share of criticism.

The Rays are often near the bottom of the league in attendance (they ranked 29th in 2019) despite a knack for putting competitive fields on the park.

Just beyond the right-centre field wall, there’s a tank filled with three different species of rays, which fans can visit throughout the game.

Home of the Cleveland Indians, Progressive Field is the second-smallest stadium in MLB, but it’s a long way clear of the Trop.

Progressive Field hosted the Chicago Cubs’ famous World Series triumph in 2016 as Cleveland blew a 3-1 lead in the Fall Classic.

With a small fan base and in the midst of a rebuild, the Miami Marlins had the fewest fans through the turnstiles in 2019.

Marlins Park has changed in recent years, but they need a drastic improvement in the on-field product to build core fan support after trading away Marcell Ozuna, Giancarlo Stanton and Christian Yelich a few offseasons ago.

As famous as sporting venues come, Fenway Park is the oldest active MLB stadium, and despite its relatively small capacity, can produce quite an atmosphere.

The Green Monster is iconic, the pesky pole makes it a great place for lefty sluggers. Fenway should be on everyone’s bucket list.

Home of the 2015 World Series champions, Kauffman Stadium hasn’t seen playoff baseball in a few years as the Kansas City Royals go through a lengthy rebuild.

It’s homers galore in Minneapolis. The Minnesota Twins have been shattering long-ball records, and are in the mix for a postseason spot again in 2020.

On the North Shore in Pittsburgh, the Pirates’ PNC Park backs on to the Allegheny river. Night games have a great view of the steel city’s skyline.

Located in downtown San Diego, the home of the Padres houses just over 40,000 people, who can enjoy the view from the towering stands or wander around the pedestrianised area behind the outfield seats.

Brand new for the 2020 season, the Texas Rangers’ swanky new stadium is yet to welcome fans in.

A great place to watch a night game, the Chicago White Sox’s Guaranteed Rate Field hasn’t seen much exciting baseball in recent years, but that’s quickly changing with the arrival of top prospects.

Detroit’s Comerica Park is not a friendly place for hitters. Early season can be pretty chilly for Tigers players.

Built just a few years ago, the Atlanta Braves’ new home has already hosted some spectacular postseason moments. With Ronald Acuna and co., they will hope for plenty more in the years to come.

One of seven stadia with a retractable roof, Minute Maid Park is a great place to watch baseball, complete with a train which makes a quick trip on its short track whenever the Astros hit a homer.

Sporting venues don’t come much better than the San Francisco Giants’ Oracle Park. Home to one of the greatest MLB dynasties, it is a stadium steeped in history.

Located on the bay, the majority of spectators have a view of the water, and hitters will occasionally launch the ball into the sea.

Nationals Park is an impressive, if slightly dull, venue. It neither favours the batter nor the pitchers, and the dimensions are uniform all the way round.

The glorious main entrance, the erratic gales of the Windy City, the ivy-covered brick, its throwback scoreboard.

Wrigley Field opened in 1914 and has retained so much of its charm, along with a devout Cubs fan base. The Cubs ranked fourth in average attendance in 2019.

A place that favours hitters, Miller Park hosted tense postseason moments in 2018, but the small-market Milwaukee Brewers face some challenging front office decisions to contend in the ultra-competitive NL Central.

Home of the New York Mets, Citi Field succeeded the wonderful Shea Stadium. Some things were retained from Shea, including the big, red home run apple.

A place where hitters see their numbers explode and pitchers are panicking whenever the ball goes in the air, Great American Ball Park has been through some difficult years with the Reds struggling, but Cincy are heading towards contention again.

Philadelphia’s fans have a reputation for their hostility towards opponents.

It’s no different at Citizens Bank Park than it is at Wells Fargo Center or Lincoln Financial Field.

Following a similar format to many others, fans can take in the downtown St. Louis skyline from Busch Stadium, or they can visit the statues of former Cardinal greats including Stan Musial, Lou Brock and Bob Gibson.

Home to the best player in the sport, Angel Stadium hasn’t hosted a playoff game since 2014. That won’t be changing in 2020.

So many followed the retro-classic look of Oriole Park since it was built in the early 1990s.

It is, of course, the location for much of the film ‘Moneyball’, too.

Always in the mix in online MLB betting odds, the New York Yankees’ home is a popular spot for New York’s millions of tourists.

It doesn’t have the same historic significance as the old Yankee Stadium, but it’s still a wonderful place to watch baseball.

The birth of T-Mobile Park came on the back of a Seattle Mariners postseason appearance in the 1990s amid threats to relocate the team.

The result was an incredible venue featuring a state-of-the-art roof.

Located in Arizona, the Diamondbacks’ Chase Field has a roof for different reasons to many others.

The sweltering Arizonan heat can prove too much, but the roof still allows sunlight in without overheating the players or spectators.

A complex cooling system enables baseball to be played regardless of the weather.

The last North American sports venue built to accommodate football and baseball, the Blue Jays’ Rogers Centre is a multipurpose arena used for all sorts.

Previously called the SkyDome, the Rogers Centre has a fully retractable roof. People on the observation deck of the nearby CN Tower can look into the stadium when the roof is open.

By far the biggest playing area in MLB, Colorado’s Coors Field is vast in every way. It’s one of two MLB stadia with a baseball capacity of over 50,000.

Over 1,500 metres above sea level, Coors has a reputation as a major hitters park with the ball carrying a long way off the bat.

Efforts have been made to reduce this over time, but you’d still rather be at the plate than on the mound.

The third-oldest stadium in MLB, Dodger Stadium has the biggest capacity by far. It was completed in 1962, four years after the Los Angeles Dodgers swapped New York for south California.

Located at the top of Chavez Ravine, and a symbol of sport in Los Angeles, Dodger Stadium will not be changing any time soon.

They have a conditional-use permit which limits the capacity at 56,000.