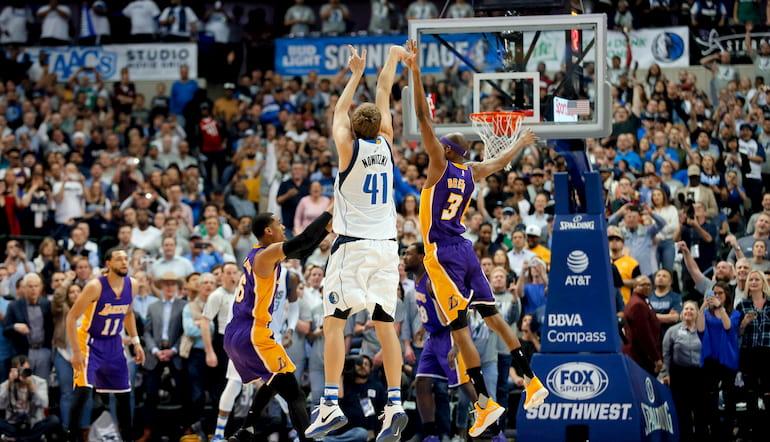 The NBA Playoffs are where legends are born, with players making shots that can elevate them to heroic status in their respective cities.

And there isn't a better way for a player to earn the status of hero than hitting a shot at the buzzer to secure a huge win for their team in the postseason.

These buzzer-beating shots, in particular, were not only great shots, but shots that meant the world to their team at the time, helping to build these players into some of the most memorable in the history of their franchises.

One of the great rivalries in the history of the NBA was between the Los Angeles Lakers and San Antonio Spurs in the 2000s.

With the Spurs being led by Tim Duncan and the Lakers being led by Kobe Bryant, both at the peak of their respective powers, series between the two teams were slugfests that often decided championships.

The 2004 Western Conference semifinals put the two teams against one another, with the Lakers getting the better of the Spurs en route to a conference title. But it was a shot by Derek Fisher that still has fans talking to this day.

Basketball betting odds had the Lakers as a slight favourite against the Spurs in the battle between the second and third seed in the West.

And in a pivotal game 5 that saw the Spurs take a late lead on a miraculous Tim Duncan shot, the Lakers had the ball with 0.4 seconds remaining with a chance to take control of the series.

They got the ball to Derek Fisher instead of one of their more heralded stars, and the former Little Rock Trojans prospect made that decision pay off with a miraculous shot at the buzzer for the win – throwing live betting markets into disarray.

Fisher's shot prompted the league to institute a rule that a ball could only be caught and shot with more than 0.3 seconds left on the clock – thus, it changed both the fate of the series and NBA history.

Before LeBron James became one of the greatest players of all-time and a multiple-time NBA champion, he was honing his craft in Cleveland as a member of his hometown Cavaliers.

And, despite rosters that had a hard time stacking up with the rest of the league, James managed to get the Cavs to the playoffs on a consistent basis.

Even though NBA betting sites saw James' team as an underdog due to their lack of depth, James' individual ability managed to keep his side afloat in many instances. His 2009 buzzer beater against the Magic was certainly one of those instances.

Down a game in the series already, the Cavaliers were facing a late deficit against a Magic team led by the dominant Dwight Howard inside.

Without time to run much of an offense, the Cavs shovelled the ball to James to let him create enough space for a final heave from three-point range above the top of the key.

He buried the shot, and the Cleveland crowd erupted in what could be considered one of the superstar's first signature moments, along with carrying the Cavs to the 2007 Finals.

This is one of many classic buzzer beaters from LeBron James in the NBA playoffs. Since 2009, he has hit shots at the end of games to sink the Chicago Bulls, Indiana Pacers, and others.

In the process, James has made it possible to argue that he is the most clutch player in the history of the NBA, or at least that he is up there with Michael Jordan.

Heading into the 2018-2019 season, the Toronto Raptors weren't given much of a shot to get to the NBA Finals in the sports betting.

Much of the attention heading into the season was instead paid to the Boston Celtics, who were set to get Kyrie Irving and Gordon Hayward back from injury.

Even our 2018/19 NBA preview showed love to the Celtics without listing the Raptors as a contender to win the Finals.

But Kawhi Leonard time and time again put the Raptors on his back to get them to the Finals, like he did when he drained this memorable buzzer beater against the Philadelphia 76ers.

Leonard's unbelievable shot came in the final seconds of game 7 of the Raptors' Eastern Conference semifinal series against the Sixers.

Both teams had taken turns stealing contests on the other team's home floor in the series, with both squads playing tight games throughout.

Naturally, the final game of the series was no exception, with the Raptors having the ball with just seconds left in a tie game.

Upon receiving the ball, Leonard darted to the corner on the other side of the floor and threw up a fadeaway shot over the much taller Joel Embiid.

And while the shot didn't appear to be going in at first, several bounces on the rim guided it in and sent the crowd in Toronto into a frenzy.

Perhaps more memorable than the shot itself were the images of players standing there, helplessly, waiting to see what the fate of the final shot would be. If nothing else, this was a moment in time that may never be forgotten by basketball fans around the world.

Animosity between two teams playing in the NBA Playoffs always makes for a more compelling series, as teams are forced to walk the line between using their rivalry to fuel aggression while controlling their emotions to avoid disciplinary action.

But when the hatred between Damian Lillard of the Portland Trail Blazers and Russell Westbrook of the Oklahoma City Thunder came to a head in their 2019 first round series, the result was magic.

Lillard pulled up from the Blazers logo at the very end of a game with the chance to knock the Thunder out of the playoffs. Normally, this would be an ill-advised shot.

But Lillard’s unbelievable range made it the perfect way to end the series, with the Thunder left to remember the long-range dagger for the rest of the offseason.

Enhancing the quality of the shot was Lillard’s reaction to it. Upset with the trash talking done by the Thunder earlier in the series, Lillard remained stoic after hitting the shot, while everyone around him in a Trail Blazers uniform buzzed with euphoria.

Instead of celebrating exuberantly, Lillard provided a cheeky farewell when he waved goodbye to the Thunder bench after the epic ending.

While this feud wasn’t on par with some of the great physical battles of the 1990s, the shot by Lillard was one of the most satisfying endings to a basketball game imaginable.

And it is one that will be talked about whenever a discussion of the league’s best-ever buzzer beaters takes place.

Basketball
NBA
NBA Playoffs
About the Author
By
888sport