Why Bernardo Silva Is So Important For Manchester City 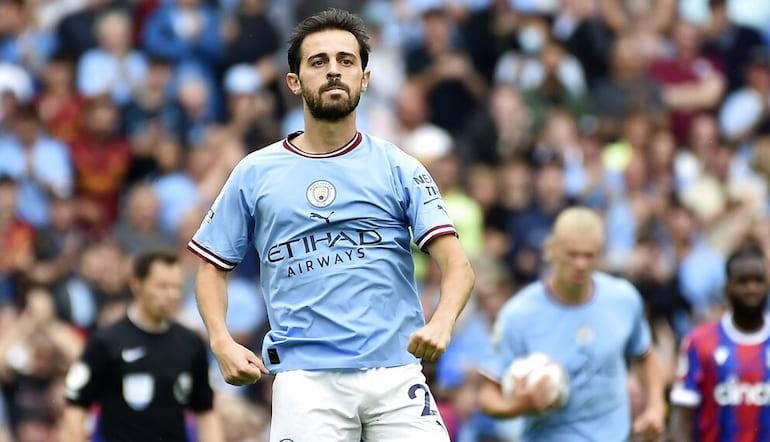 When Manchester City purchased Bernardo Silva for £43m in 2017, the club’s fanbase had already been treated twice-over to ninety-minute teasers.

A couple of months earlier, Pep Guardiola’s side had exited to Monaco after a hugely engaging, high-scoring Champions League quarter-final and in both fixtures, the Portuguese baller stood out, exhibiting all of the attributes that have since bamboozled English defences.

He was poised and elusive, with a whip-smart understanding of his surroundings. He was forever popping up in dangerous areas to perform another conjuring feat of clever ball-retention.

The player’s magnetic relationship with the ball and dervish movement had him run rings around Gael Clichy, and Nicholas Otamendi, and Yaya Toure, and in truth many more because when Silva had possession he drew opposition players to him like a tractor beam, in doing so creating acres of space for team-mates.

City fans therefore were excited by the signing, and rightly so. They had just recruited one heck of a winger, an impish creative who could turn the live betting markets upside-down with one dip of a shoulder.

In the event however, their assessment was only half correct, because what wasn’t so evident on those two continental nights was how tenacious he was. How hard-working.

In his five years at City no other player has run more or pressed with such ferocity. Last season, Bernardo Silva covered more ground that any other player, averaging a phenomenon and lung-busting 11.90km per 90.

In his five years in East Manchester, Silva has played 46% of his 170 appearances as part of a midfield three, and only 33% of the time he has been stationed out wide.

This then is not an out-and-out winger, nor a combative midfielder, but rather a hybrid. He is in effect two players rolled into one, both of them utterly brilliant.

Which frankly doesn’t seem fair given that City are already a remarkably well together outfit. Viewed a certain way it’s like starting each match with a man advantage so is it any wonder the Blues have won the league on four occasions during his spell here while according to the Premier League betting, they are hot favourites to do so again.

His quality and consistency is such that in 2019, City supporters were pushing for their little maestro to be included in a serious conversation for that year’s Ballon d’Or, but regarding his vitalness to the team it’s his versatility of attributes that we return to.

Guardiola’s blueprint is convoluted and demanding, and to possess a player who is equally capable of working his socks off as carving our opportunities is a priceless commodity for the Catalan.

It means he can push the boundaries elsewhere in his set-up. Take greater risks.

Bernardo Silva may not have made our recent all-time top ten of City players list but it should not be under-estimated how pivotal he’s been during their greatest ever era.

Regrettably, from a club perspective, it remains to be seen how much longer Silva will prove so indispensable. For two consecutive summers rumours have abounded about the player wishing to ply his trade closer to home, with Barcelona twice showing sustained interest.

Even neutrals would agree it would be sad to see him go, because what we have here is a footballer who is quintessentially English in attitude, and European in application. He’s been nothing but a joy to watch.

Bernardo Silva announces that he’s not going to Barcelona: “I’m going to stay at Manchester City. I haven't received any offers”. 🚨🔵 #MCFC

“I'm staying in Manchester, here I'm happy and the decision has been made”, says via @FCBRAC1. pic.twitter.com/DIQjW6ZUAg

Though obviously, should he depart, City will be okay. They’ll cope. In Kevin De Bruyne they have an accomplished artisan.

Then there’s Grealish, and Foden, and Mahrez, not to mention the eternally under-rated Gundogan and not to mention either, the emerging, potentially generational Cole Palmer.

But that is almost besides the point, for that overlooks how crucial their scheming, tackling, dribbling, pressing master of all trades is to their endeavours, and has been to their successes. There really is only two Bernardo Silvas.