Which Premier League kits are must buys this season? Join our football writer as he reveals his five favourite jerseys in England's top flight in 2022/23 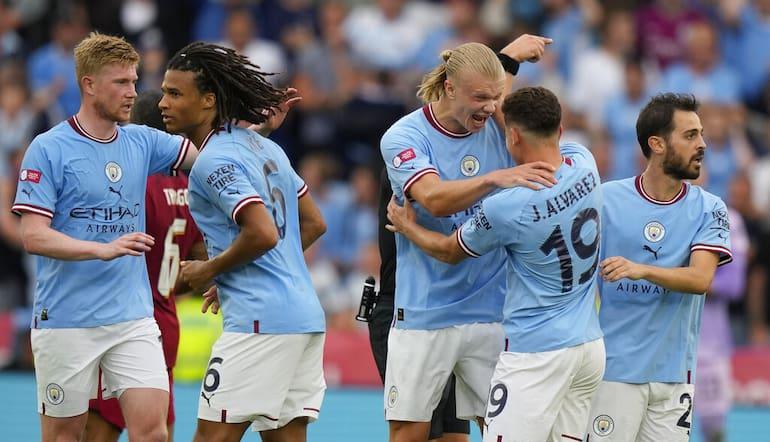 This summer has seen 39 new Premier League kits unveiled, with only Brentford bucking the trend, retaining their home shirt from last season. Kudos to the Bees for that.

Of the 39, some appal, some impress, while many others divide opinion such is the way with fashion. Five though do stand out. Five are absolutely lovely.

We hope the designers of these beauties treated themselves to a chippy tea on putting the finishing touches to their creations. Because they truly did nail their brief.

Not only did the Seagulls beat Manchester United on the opening day but they did so while wearing this stylish number, that could go down in years to come as a club classic.

Brighton’s famous blue and white stripes have been seriously chunkified, a trend that is increasing in modern-day kit design, with a broad swoosh of blue on the shoulders accentuating the expansion.

This is off-set by gold trim on both the collar and cuffs giving an overall affect that looks the business on the pitch, in the stands and down the pub.

Their burnt orange away isn’t half bad either...

The lightning affect that runs down the collar may not be to everyone’s taste but so closely does this shirt otherwise adhere to classic lines that perhaps it benefits from a bit of pizzazz.

Adidas have long aced it with Gunners gear and once again they have done the Emirates faithful proud with a shirt that recognizes the strengths of its brand.

Arsenal play in red, with white sleeves. Why stray from a winning recipe?

Imagine Thierry Henry and the rest of the Invincibles adorned in this during their record-breaking season. They would have looked magnifique.

Palace’s kit manufacturer Macron took an enormous risk in playing with the club’s familiar template. Thankfully, it’s a gamble that has paid off handsomely.

Sure, the crayoned shading is far removed from the linear stripes of yesteryear, that evokes images of Ian Wright or the greatest one-season wonder in Premier League history, Andy Johnson running off in celebration after bagging yet another goal.

But kept in check by solid white trim it avoids the trap of looking too busy. Instead, it’s a clever reworking of a design classic.

Hummel can usually be relied on to come up with the goods and for the Saints’ away shirt this season they’ve been inspired by the club’s maritime heritage and the nearby Solent.

The end result is a bold and beautiful masterpiece that comes alive via an array of swirling waves, tinted with gold.

Almost paisley in its design it dares the onlooker to either fall hopelessly in love or actively hate it and in a marketplace that too often plays it safe, is that a bad thing?

Most Premier League predictions have Southampton down as relegation strugglers this term. This shirt deserves better than that.

City have had some stinkers in recent years and included in that assessment are previous collaborations with Puma. Remember that fruit salad silliness from 2019/20? Good grief.

Here though, the German giants have knocked it out of the park, digging down into the club’s illustrious past to offer up a homage to the days of ‘King’ Colin Bell and a full-to-overflowing Maine Road.

The maroon trim is gorgeous and keeping the sky blue free from any frills is smart because it then sings.  Then there’s the centralised badge and Puma symbol. Oh boy.

The latest Premier League odds price City as strong favourites to win their fifth league title in six years. Kevin de Bruyne and co and going to look like dons lifting the trophy while wearing this.

For Colin the King 💙