888sport look into the long-standing UFC vs boxing debate and analyse the key differences between the two sports in areas such as rules and format. 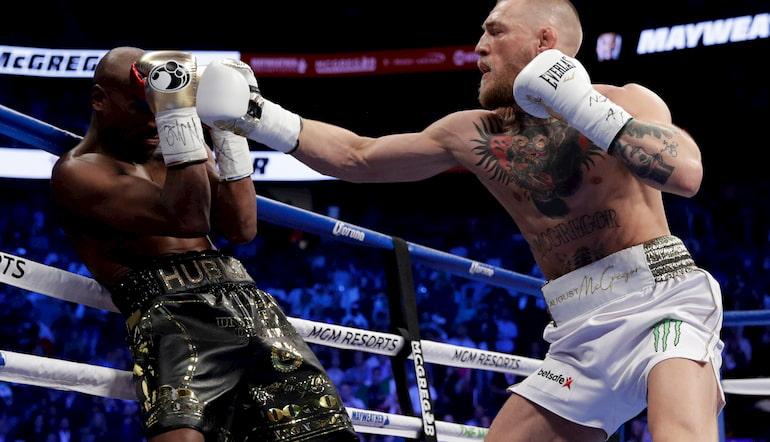 MMA's rampant rise to mainstream prominence in recent years has seen it challenge boxing for the right to be called the number one combat sport in the world.

UFC vs boxing; it's a long-standing battle that is continuing to divide opinions and spark passionate debates among both sets of fans.

People have always fought. Hand-to-hand combat has been around from ancient civilisations, with the earliest evidence of actual boxing rules dating back to Ancient Greece. Here, it was established as an Olympic game in 688 BC.

Since then, boxing has continued to evolve throughout the centuries, while it was in 1867 that 'Queensbury Rules' were introduced.

Throughout England and much of the United States, prize-fighting was outlawed, with many bouts taking place underground away from the watchful eye of the police.

Bare fists were later replaced with gloved contests and the sport's popularity grew among fans and punters thanks to the likes of popular combatants John L. Sullivan and esteemed promoter Tex Rickard.

Different varieties of MMA have been around from the 1800s too across Europe and America, with this including 'no-holds-barred' clashes.

Long before the crossover meetings of Muhammad Ali vs Antonio Inoki and Floyd Mayweather Jr vs Conor McGregor, where Mayweather lived up to his billing as favourite in the betting with a well-disciplined performance, historic world heavyweight champions John L. Sullivan and Bob Fitzsimmons contested wrestlers William Muldoon (1887) and Ernest Roeber (1897) respectively.

MMA's rise in popularity and subsequent UFC vs boxing rivalry was kick-started in the early 1990s when the UFC, the marquee organisation now ran by president Dana White, first broke on to the scene on American soil.

Since then, both combat sports have maintained their growth in stature and financial gain.

Difference between UFC and boxing

While there are some similarities between the two, there are also many differences between UFC and boxing.

Meanwhile, boxing is 'limited' to only punches with a closed fist to both the head and body, with the aim being to knock out an opponent or win on points over the scheduled amount of rounds.

Fighters in the UFC are also able to win via these methods but can prevail by submission as well; making their opponent 'tap out'.

Boxing and the UFC's top level have contrasting fight lengths too. The elite level of boxing will typically be set for 12 three-minute rounds, including world championship match-ups. MMA bouts are usually contested over five five-minute rounds.

Smaller gloves are used in the UFC for bouts that are fought inside the octagon, or a cage, and are often 4oz with fingers kept free for grappling. In the boxing ring, pugilists wear 8oz or 10oz padded gloves.

While there are plenty of differences between the two, Duncan French, vice president of performance for the UFC Performance Institute, says the key factor lies in the tempo and 'effort-to-pause ratio'.

"Importantly, the biggest difference between boxing and MMA is the effort-to-pause ratio, which essentially defines the tempo of a fight," outlined French ahead of the cash-grab encounter between Mayweather and McGregor in August 2017.

In boxing, it averages at 3-1, while MMA's ratio is flipped at 1-4 due to the inclusion of grappling and groundwork.

Most famous fighters in combats sports

From the early days of both boxing and MMA, the two have produced an abundance of megastars that have captured a global audience with their talents and even transcended their own sports.

Fast forward through the decades of pugilism and many more influences emerged and made lasting impacts.

They've also been some of the strongest favourites in the boxing betting in recent clashes, including Mayweather when he eventually outpointed his rival 'Pacman' back in 2015.

Ahead of any upcoming bout, like that previously dubbed 'Fight of the Century', fans can back their favourite fighters to win by decision over 12 rounds, by knockout and even pick which particular round they fancy proceedings to end in.

Mayweather was almost a sure-thing to side with for success over the distance during the latter years of his illustrious career, with plenty of supporters having placed funds on him for points triumphs during that time.

'Money' Mayweather, in particular, has dominated the sport's headlines and broken box office records throughout his two decades at the top, becoming a five-division world champion and cementing his position as arguably the best boxer of his generation.

The highest-grossing boxing attraction in history is one of the most high-profile fighters the sport has ever witnessed.

Over in the world of the UFC, a former opponent of Mayweather's has become the most marketable in the organisation's relatively short history.

Irishman Conor McGregor burst on to the UFC scene back in 2013 after swiftly building his profile and evergrowing reputation in less prominent companies like Cage Warriors back in his native homeland.

His rampant form in the UFC led to him becoming one of the popular favourites in the UFC betting as he was so consistent.

Since his debut victory over Marcus Brimage, 'The Notorious' has gone on to dominate pay-per-view ratings and broken both fighting and financial records in his illustrious career.

He's had his fair share of controversy along the way, but the Dublin-born fighter is undoubtedly the UFC's biggest star ever.

McGregor became the first UFC fighter in history to hold titles in two weight divisions simultaneously when he knocked out Eddie Alvarez back in 2016 and is the most successful draw ever in the organisation, having headlined five out of the six top-selling UFC pay-per-view events, which naturally led to the organisation attracting a lot of attention in the MMA betting further building up the profile of the sport.

The sport shares similar betting markets to boxing such as being able to bet on which round the bout will end and how it will be decided due to how the formats are alike.

But before McGregor strutted into the octagon, there were other memorable names that made MMA hit a more mainstream audience and attracted plenty of viewership.

That includes Anderson Silva, Randy Couture, Jose Aldo, Chuck Liddell, Ronda Rousey, Brock Lesnar, Lyoto Machida and Georges St-Pierre. All of those legends have also played their part in the growth of UFC's popularity over the years.

Boxing has always been one of the most-watched sports in the world, having become internationally acclaimed through the legends that have donned their gloves throughout history.

As already previously mentioned, rule changes have been applied in boxing from its early days up until the modern-day and current climate.

It's believed that the first-ever official boxing match to take place in England occurred in 1681, with there being no written rules to regulate and govern the event. It would be over 60 years before any rules actually got introduced in 1743.

Then champion Jack Broughton was the man to bring such rules in as a way of protecting the fighters who were brave enough to step foot into battle, with a number of tragic deaths having compelled him to do so.

One of those brought in was that if a competitor went down for longer than 30 seconds then the other fighter would be declared the victor.

His decision to codify a set of rules eventually evolved into the London Prize Ring Rules, which are regarded as the foundation for future generations before Queensbury Rules came along later on.

The latter took place in 1866, with those latest developments having included limited three-minute rounds and gloves being made compulsory.

Notably, the first-ever mouthguard to be utilised within the squared-circle was by English legend Ted 'Kid' Lewis (one of the greatest ever UK fighters in history) in 1913, which had been invented 11 years prior.

Obviously, this soon became a crucial safety element of the sport that is still obviously used today.

Weight classes were brought in around 1910 in order to distinguish fighters of all different sizes and have them more fairly matched.

Despite there having only been eight divisions back in those early days of pugilism, there are now technically 17, with the addition of further weight classes throughout time.

An unlimited amount of rounds came to an end in the early 20th century, with 15 rounders becoming the norm for most boxing matches across 1910 and 1920.

The current 12-round fight length came into effect in 1983 following the tragic death of Duk-koo Kim against Ray 'Boom Boom' Mancini, having passed away after being knocked out in the 14th round of their ill-fated meeting.

The referee of a bout would have decided the winner of a fight in the early 20th century but this has since been altered to ringside judges to improve the reliability and accuracy of scoring in fights - although there are still plenty of cases of incompetence or corruption with that method.

With MMA, the early UFC events were basically announced as 'no-holds-barred' contests and were regarded as barbaric. Though style vs style match-ups were promoted, with a karate-based competitor facing a grappler etc.

Out of this the Gracie era of jiu-jitsu was born, with much smaller guys using their skills to force much larger foes to tap out with relative ease.

MMA fighters today are now more developed in all areas of combat sports, with the UFC having come a long way since its early days.

The same can be said for boxing. Fans of both will continue to argue that their cherished combat sport is better in various ways.

But the UFC vs boxing is a debate that will only carry on throughout time, as the two maintain their progression and growth in popularity in the coming years.