According to estimates, Carl Froch has a total net worth of £15 million. Here, we look at Carl Froch wealth figures and his boxing career... 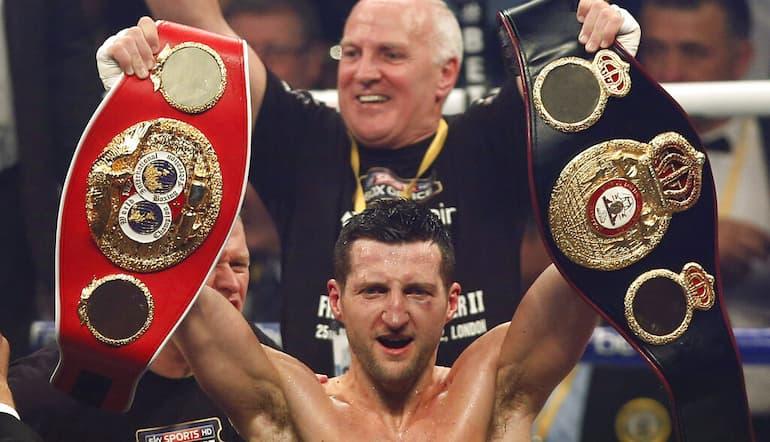 A defining icon in British boxing throughout his professional career, Carl Froch was a huge hit in the super-middleweight division.

‘The Cobra’ suffered just two defeats in 35 fights, with Froch winning by stoppage in 24 of his 33 professional victories.

If you are somebody who enjoys placing bets on sports, you’ll probably remember that double header between Froch and George Groves.

It was a rivalry that grasped the attention of boxing fans around the world and that second fight at Wembley Stadium will live long in the memory.

Is Froch one of the greatest British fighters of all-time? You could certainly make a strong case for his inclusion in such a list. However, his record is blemished slightly by those two defeats…

Unlike many, Froch didn’t move around the boxing weight classes – he stuck to what he was good at and he was a dominant player in the super-middleweight world for many years.

Since retiring from the ring, Froch has found other ways to boost his wealth. Here, we look at Carl Froch net worth estimates and discuss his successful boxing career.

Boxing is a lucrative sport to say the least and Carl Froch enjoyed several major paydays that have contributed to his total estimated wealth.

Winning 33 of his 35 professional bouts, Froch was a standout figure in the boxing world throughout his career – attracting plenty of attention in terms of pay-per-view interest.

In fact, his rematch with George Groves was dubbed one of the biggest fights in British boxing history as the pair fought in front of a capacity crowd at Wembley Stadium.

Estimates valued Froch’s wealth increased by a whopping £10 million as a direct result of that bout, making it twice as profitable as the first fight some six months earlier. 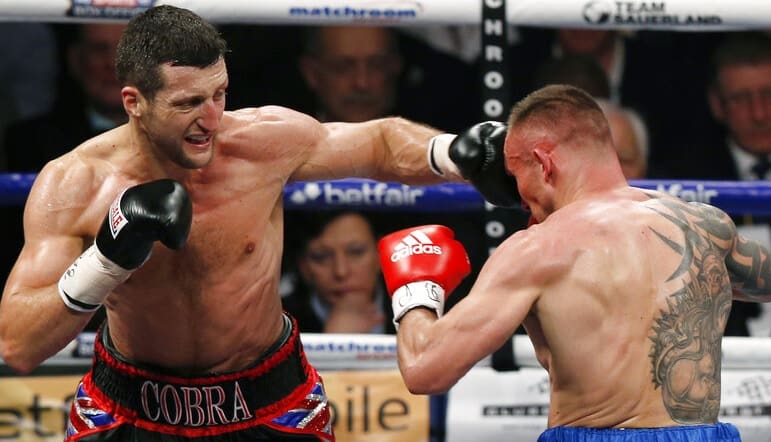 In addition, Froch defeated Danish superstar Mikkel Kessler in 2013 to net a hefty £2.5 million – and that fight paved the way for the Groves bout.

Since retiring, we’ve seen plenty of Carl Froch on Sky Sports. The Sheriff of Nottingham is one of their top boxing pundits and we can assume he is paid handsomely for his insight.

An avid poker player, Froch enjoys playing the popular card game and reports even hinted that The Cobra would appear alongside Jason Statham in a Hollywood film.

Unfortunately, those rumours were nipped in the bud pretty sharpish, which is  shame as we’d have loved to see Carl Froch on the cinema screen…

Carl Froch married Rachael Froch, formerly Cordingley, in 2019 – some five years after The Cobra proposed to his partner in the boxing ring.

The couple tied the knot in front of their three children in a beautiful ceremony in Italy, with several of Froch’s fellow boxing professionals in attendance.

Speaking to Hello!, the super-middleweight legend said: “I’ve won world titles and been to Buckingham Palace but this was one of the best days of my life.

“I always knew I didn’t need a piece of paper to tell me I’ll be with Rachael for the rest of my life, but we are now all officially Froch, and I am so glad we did it.”

Having waited five years to tie the knot, the couple’s three children – Rocco, Natalia and Penelope – were all in attendance and were given special roles in the ceremony.

Carl has two brothers; Lee and Wayne. Lee was also a passionate boxer but struggled with alcoholism and he never managed to match the professional heights of his brother.

However, he conquered his own demons and achieved three years of sobriety before winning the semi-professional EBF heavyweight title in 2018 – an incredible feat to say the least.

Froch was relentless in the ring throughout his professional career, losing just twice in 35 fights and winning 24 of his 33 victories by way of knockout.

The Cobra held multiple super-middleweight world titles, including the WBC belt twice, the IBF title from 2012 to 2015 and the WBA title from 2013 to his retirement.

A major figure on Eddie Hearn’s books, Froch made his professional debut at 25 years old but wasn’t picked up by the famous boxing promoter until 2011.

However, Froch climbed his way up the boxing ladder and eventually clinched his first world title in 2008 after a points decision triumph over Jean Pascal. 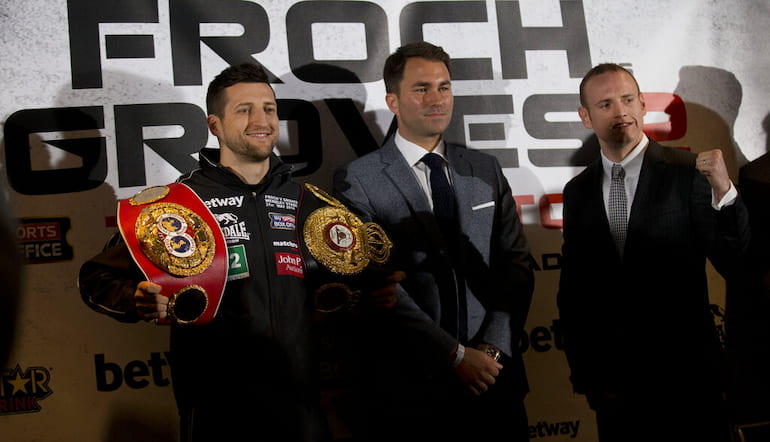 Froch won four world title fights and successfully defended his championships in seven bouts, enough to convince The Ring magazine to rank him as the third greatest British boxer pound-for-pound.

Upon his retirement, Froch stated: “I have nothing left to prove and my legacy speaks for itself.

“I’m incredibly proud of what I have achieved in boxing but now is the right moment to hang up my gloves.”

One of the biggest boxing betting clashes this century, the rivalry between Carl Froch and George Groves was as gripping out of the ring as it was in it.

With Groves announced as Froch’s latest mandatory challenger, it looked like a fairly routine title defence for The Cobra. However, things didn’t pan out that way…

Midway through the first round, Groves put Froch on the floor with a thunderous left hook – sending shockwaves around the Manchester Arena.

It was only the second time in Froch’s professional career that he had been floored but he showed immense resilience to get back up and respond.

However, the fight ended in controversial fashion as referee Howard Foster waved it off in the ninth round to spare Froch from an embarrassing defeat.

Groves was ahead of Froch on all three judges scorecards prior to that round and the wider boxing community immediately called for a rematch.

And a rematch is what they got. If you thought the first fight was big, the second fight was on a whole new level.

The pair swapped Manchester for London and 80,000 spectators attended the rematch at Wembley Stadium – this was now a huge fight for British boxing followers.

Froch revealed that he would give the British public what they want to see and the demand for tickets was red hot, with 60,000 tickets selling in less than an hour.

A further 20,000 tickets were made available and quickly sold out, making the Froch Groves rematch the biggest attendance for a boxing fight in Britain since 1945.

As a spectacle, the second fight wasn’t quite as entertaining as the first. Both fighters looked edgy and it was more of a technical encounter than an explosive free-for-all.

However, the fight took an unexpected turn in the eighth round as Groves came out all guns blazing and The Cobra sensed his opportunity to strike.

Froch unleased a devastating right hand that knocked Groves out and that was the end of the fight. It was a massive shot and a punch that landed Froch the Knockout of the Year award for 2014.

“I knocked George Groves out in front of 80,000 people at Wembley” quickly became Froch’s catchphrase and fans often keep tabs on whether that fight is mentioned whenever he is on air.