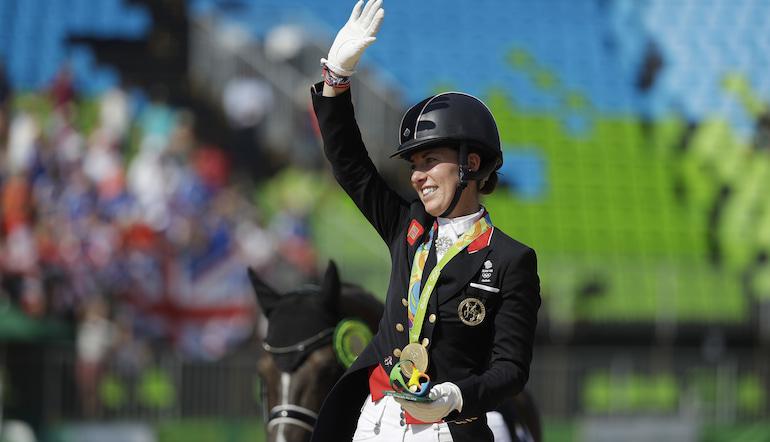 A stand out name in FEI Dressage, Charlotte Dujardin is quite simply an equestrian icon. With her graceful horse Valegro, she has shown us all that dreams really can come true.

From moments of glory to team triumphs, Charlotte and Valegro will always be one of the most enduring memories of the London 2012 Olympic Games for many British equestrian fans.

Charlotte was a gold medal winner at the Rio 2016 Olympic Games and a double gold medallist at the London 2012 Olympics Games.

These figures are pretty hard to pin down but the general consensus is that Charlotte is worth between 3-5 million pounds. It’s certainly a lot more than a UK horse racing jockey salary comes in at.

Charlotte was born in Enfield in 1985 and grew up in Leighton Buzzard, Bedfordshire. She currently lives in Malswick, Gloucestershire, just a 5 minute drive away from *Carl Hester’s yard in Newent.

Charlotte Dujardin was on the back of a horse at a very early age. As a toddler, she used to accompany her show jumper mother on slow trots around the family yard.

When she became a little older, she started riding her older sister’s pony until she inevitably got her own. She really used to enjoy riding her sister’s horses from the show ring back to the horsebox when she went with her to competitions.

Charlotte Dujardin showed signs that she was going to be a fine horsewoman even in those early years.

As a three-year-old, she managed second place at her first Pony Club show jumping event. Her mother Jane fully supported the Dujardin sisters’ ambitions from the word go.

By the young age of 16, Charlotte had already won the Horse of the Year Show four times and Hickstead’s All England Jumping Course three times.

She continued to compete in that jumping discipline until the age of 17 when she dedicated herself fully to dressage. Even now she still enjoys dipping into the jumping scene now and again.

In 2011, Carl Hester and Roly Luard the co-owners of Valegro asked Charlotte to train the young gelding. It was Hester’s plan to ride the horse after his training was complete, but Valegro and Dujardin hit it off so well that they went on competing together.

That same year the pair achieved a record debut score of 74% on their first dressage Grand Prix competition.

With Valegro, Charlotte Dujardin went on to win many of the top dressage titles, including the Grand Prix Special, World freestyle, World Cup individual dressage, and European freestyle titles.

Charlotte Dujardin described Valegro as “the kind of horse you just know he’s gonna pretty much nail it in the arena.”  Dujardin rarely gets nervous at a competition, very much in part due to the calm demeanour of horses such as Valegro.

Before the 2012 Olympic Games, the UK had never won a single medal in dressage in a century of trying. But Charlotte Dujardin's triumph on Valegro changed all that, adding an individual gold to the team gold Team GB had won already that week.

Dujardin's routine, which a panel of judges mark for technical proficiency and artistic expression, was as patriotic as you possibly get.

It started with the chimes of Big Ben and incorporated snippets of Elgar's Land of Hope and Glory, Holst's The Planets and the theme from The Great Escape.

Dressage was one of the success stories at London 2012 and Charlotte Dujardin and Valegro were at the heart of it.

Already a double gold medallist from London 2012, Charlotte went to Rio on the cusp of being a history maker, and she did just that by winning a third Olympic title with Valegro.

In the team event they danced to a score of 85.071 per cent, the highest of all competitors.

That then qualified Charlotte for the individual competition, where she ranked second after the Grand Prix Special round before scoring a whopping 93.857 in the Grand Prix Freestyle section to take the gold medal by almost five per cent from her nearest pursuer.

Dujardin, who was aged 31 at Rio, knew it would be her last Olympic ride with Valegro and was understandably very emotional after scooping gold with him.

Charlotte Dujardin, who currently holds all dressage world records, goes to Tokyo with three gold medals under her belt already and can become just the second athlete in Olympic history to win three individual dressage titles in a row.

Charlotte’s latest horse is a ten-year-old mare named Mount St John Freestyle. The pair got off to an excellent start with a Grand Prix victory together at the Olympia Horse Show over the Christmas holidays.

Picks and selections at the Tokyo Olympics, including equestrian horse racing tips, will be on our 888sport website throughout the duration of the games.

Charlotte Dujardin and her charismatic horse Valegro burst onto the international sports scene with their amazing performance at the 2012 Olympic Games in London.

Since then a book about Dujardin’s life has been written entitled 'The Girl on the Dancing Horse'.

You can follow all the exploits of Charlotte Dujardin CBE, Dressage, Olympian, World Record Holder, The Girl on the Dancing Horse via her official Instagram account: @charlotte_dujardincbe.

There will be online betting for all sports and events at the 2020 Tokyo Olympics, including equestrianism, on our 888sport website.

Olympic Games
About the Author
By
Steve Mullington