888sport look at some of the standout moments at the PDC World Championship – what is your top highlight on the Alexandra Palace stage? 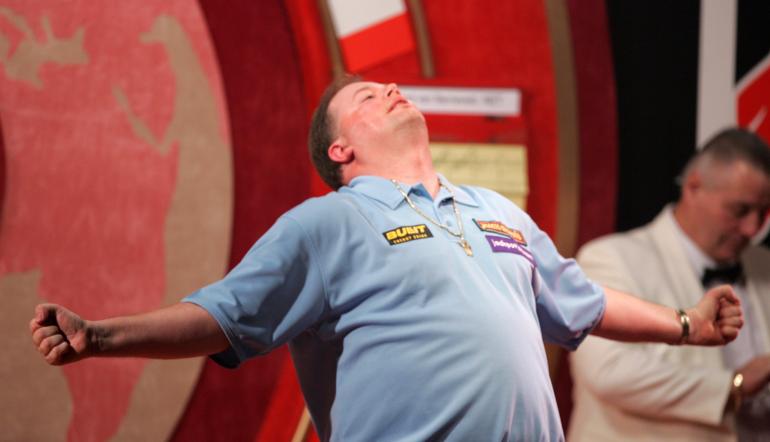 The 2020 PDC World Championship is almost done and dusted but it has been a fantastic tournament for so many reasons.

Fallon Sherrock’s rise to power has been well-documented while Peter Wright’s heated semi-final success over Gerwyn Price sent shockwaves across the sporting universe.

In this article, we look at the greatest moments in PDC World Championship history. As the highlight of the darts calendar, fans have been treated to many memorable moments over the years but some in particular stand out above others.

Here are our favourite ever PDC World Championship moments:

Without a doubt, Raymond van Barneveld and Phil Taylor played out the greatest PDC Darts World Championship final of all-time in 2007. Circus Tavern was the venue and that match is still talked about to this day.

Van Barneveld had won his previous three tournament matches by a combined 15-0 and the Dutchman was expected to go close in his pursuit of glory. However, what followed exceeded all expectations as it went right down to the wire.

Both players topped the 100 average mark but Van Barneveld came out on top 7-6 after an intense affair. It was a topsy-turvy contest between two of darts’ greatest ever players and it is unlikely we will see a World Championship final to compete in terms of drama and excitement.

Van Gerwen was the red hot favourite in his World Championship semi-final against James Wade but nobody expected the Dutchman to be quite as dominant. This performance had everything; a convincing win, a high average and an incredible nine-dart finish.

Arguably the best darts player ever, Van Gerwen almost became the first player in history to record back-to-back nine dart finishes in a televised event. Surely it is only a matter of time until the Dutchman defies the odds and achieves this feat.

Van Gerwen went on to lose the PDC Championship final on that occasion as Taylor claimed his 16th world title. We’ll get onto that shortly but Mighty Mike deserves plenty of plaudits for his incredible effort in that semi-final against Wade.

Taylor got the better of Van Gerwen in a high-scoring World Championship final, with both players again topping the 100-average mark. The Dutchman was touted to get the better of his opponent but Taylor defied the odds to claim his 16th world title.

Van Gerwen found himself 2-0 up and then 4-2 up but Taylor won five sets in a row from that point to clinch victory. It wasn’t his easiest success but it was incredibly sweet as that triumph silenced Taylor’s doubters – particular as Van Gerwen was the new world number one.

At the time, many darts fans claimed that Taylor should announce his retirement there and then but he continued to play until the end of the 2018 PDC World Championship. He went on to reach the showpiece event but fell short against new kid on the block Rob Cross.

The 2018 World Championship will be forever known for Cross’ exploits. His rise to power was well-documented, with Cross’ nickname Voltage a play on words relating to his work background as an electrician and he quickly matured into a fan favourite.

Cross defeated the great Phil Taylor in the final – an impressive feat but made even more impressive as Cross was a Sussex pub player when Taylor won his most recent World Championship.

Even the most ardent Taylor fan would admit that Cross was full value for his victory and, if anything, the 7-2 margin was probably kind on the 16-time world champion. Cross hasn’t quite lived up to the hype since then but time is very much on his side.

Fallon Sherrock is now a household name in the world of darts. In the space of a whirlwind couple of weeks, Sherrock went from an unknown quantity to ‘Queen of the Palace’ and we could see lots more of her at future darts tournaments.

Nobody expected Sherrock to emerge victorious in round one but she defied the odds to beat Ted Evetts. In the second round, she raised her game further to defeat 11 seed Mensur Suljovic – arguably the biggest scalp of the 2020 PDC World Championship.

Sherrock quickly became a fan favourite but exited the competition at the hands of Chris Dobey in the third round. However, her impact and influence on the tournament has changed the game for female players in the future.