David Beckham Net Worth – How Much Is The Football Legend Worth?

How much is David Beckham net worth valued at? From his days at Manchester United to his ventures away from football, we look at the celebrity's wealth figures... 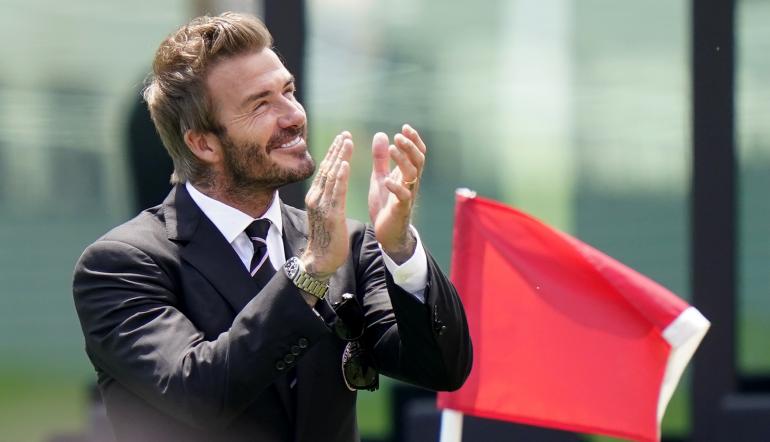 Born on 2nd May 1975 in Leytonstone, London, David Robert Joseph Beckham was the son of a kitchen fitter and hairdresser.

His natural talent for football from a young age caught the attention of Manchester United, whose academy he joined.

He made his debut for United at the age of 17, and would spend 11 hugely successful years at the club, bucking many Premier League predictions by helping transform United into multiple title winners.

He went on to play for Real Madrid, LA Galaxy and Paris Saint-Germain before retiring, and now combines ownership of Inter Miami Football Club with many other business interests.

How much is David Beckham worth?

David Beckham has a net worth of £330 million, though some of that is a combined value with his wife Victoria.

As a player, the combination of his immense skills as a footballer and good looks ensured he became one of the most marketable players in the sport’s history.

At his peak at United he earned £100,000 per week, but Beckham’s income has never come solely from playing football.

Remarkably, and almost uniquely, he earned considerably more in the twilight of his playing career. In his six seasons at LA Galaxy, his total remuneration package earned him £165 million.

He pocketed £37 million for his year at PSG, a team many will be backing this season via pre-match and in play betting to win multiple trophies.

His good looks meanwhile have ensured a glittering modelling career away from the pitch, having represented endless companies, including the likes of Calvin Klein, Pepsi, Adidas and Gillette.

His image rights company alone makes him £13 million per year. Add to all this an extensive property portfolio, and you can understand how he has amassed such a huge net worth.

Born in Harlow in April 1974, Victoria Beckham OBE was one of the world’s most recognisable celebrities before she began dating David Beckham, as one of the five members of the Spice Girls, under the nickname Posh Spice.

They sold over 100 million records, making them the most successful girl band of all time. She got together with David in 1997, and two years later they married in a lavish ceremony.

Since the end of her singing career, she has branched out to become an extremely successful businesswoman, as a songwriter, fashion designer, TV personality, author and more.

There was even time for a brief Spice Girls reunion too, and she has talked passionately about how she and David enjoy their time spent parenting.

David and Victoria Beckham have four children together. Their eldest child, Brooklyn was born in 1999.

Romeo was born three years later, son Cruz in 2005 and their first daughter Harper Seven was born in 2011. Victoria has called her children her “greatest achievement”.

It is not surprising that their children follow to some extent in their parents’ footsteps.

Brooklyn Beckham has shown an aptitude for football, but has also done modelling work, is passionate about photography and in July 2020 proposed to his partner Nicola Peltz.

Romeo has also done modelling work, while Cruz and Harper Seven have a clear resemblance to their parents but are too young to be planning future careers just yet, though Harper Seven seems to have caught her mother’s performing bug, having joined a theatre academy.

There have been numerous semi-autobiographical books about David Beckham during the first half of his playing career, such as My Story in 1998 and My World in 2000. His main autobiography however was titled “My Side” and was released in 2004.

Marketed as Beckham’s life story ‘in his own words’, the book chronicles his rise through the ranks at Manchester United, being part of the most successful club in England, his complicated relationship with Alex Ferguson, a new chapter at Real Madrid and the ups and downs of his England career.

It is a fascinating look into his rise to fame, dealing with the glare of the public and the importance of his family.

If a statue for David Beckham was to be unveiled at one of the clubs he played for, most would assume it was outside Old Trafford, home of Manchester United, whose Premier League odds hint at a possible return soon to the Beckham glory days.

Beckham made 98 appearances for the team, scoring 18 goals, and was part of the team that won back-to-back titles in 2011 and 2012. Football betting odds suggest this is a feat that will not be repeated for a while.

Beckham got to see the statue for the first time when it was unveiled before the team’s season-opener against Chicago Fire in 2019.

The ceremony created some controversy among many LA Galaxy fans, who felt there were more fitting recipients for a statue outside the ground.

As a fashion icon, it is of little surprise that Beckham’s ever-changing hairstyles down the years have attracted much attention – and his hair has changed a lot.

Beckham’s career can be chronicled by the hairstyle trends he has inspired. In the 1990’s he preferred long, floppy hair with a centre parting.

Next up was bangs with tinted highlights, before a significant shift to a buzz cut, and a lack of any hair at all. Many hairstyles would follow, from a mohawk, to highlights and longer hair once more, even braids.

While no one knows what hairstyle will come next, in recent years Beckham has settled more for medium length hair, with the odd quiff as an extra. He remains a fashion icon and a trendsetter around the world.

David Beckham’s Instagram account is extremely popular, with over 68 million followers, and certainly shows off his fun-loving side.

His posts give us an insight into his world, with photos and videos of his current life, from his younger days, modelling and charity work, and plenty of him as a devoted family man.

His Instagram bio contains a link to 7.org, which is the website for the David Beckham UNICEF fund. The fund has a sole objective – to unlock incredible potential in every child, by tackling violence, bullying, child marriage and missed education.