England World Cup 2022 Squad: Which Players Are On The Plane To Qatar?

Who will Gareth Southgate select for England's 23-man World Cup squad? We discuss the latest squad rumours, who makes the cut and who misses out... 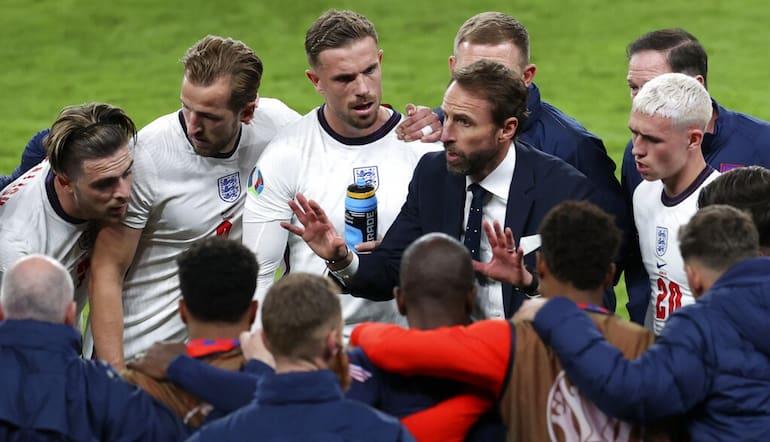 England are among the favourites for the 2022 World Cup in football betting odds.

Gareth Southgate led the Three Lions to the last four in Russia and they were a penalty shootout away from winning the Euros under the Wembley arch in 2021.

Who Makes The England Squad?

England’s chances of going all the way in Qatar were aided by a very favourable draw.

Put with the USA, Iran and one of Ukraine, Scotland and Wales, Southgate’s team are heavy betting favourites to come out of Group B.

Let’s take a look at how the England 2022 World Cup squad is shaping up. Fingers crossed none of the key Three Lions players get injured in the coming months...

The core of the England squad is what makes them among the top teams in World Cup odds. These are players with tournament experience, players Southgate has shown he trusts in knockout matches.

If available, this group will be on the plane to Qatar this winter. Southgate has been unafraid to pick on form, but some players are almost immune from that selection criteria and understandably so.

Harry Maguire and John Stones are the only two central defenders we can feel confident that Southgate will name in his squad.

Declan Rice, Mason Mount, Raheem Sterling and Harry Kane are all definite starters, and Reece James should be in pole position in the right-back sweepstakes if he’s fit.

Phil Foden and Jude Bellingham could both start depending on club form and Southgate’s tactics.

For most of these players, it would be a surprise if they missed out.

Trent Alexander-Arnold and Kyle Walker have slipped into this category largely because of England’s riches at right-back – it’s no secret that Southgate favours defensive solidity over Alexander-Arnold’s attacking prowess.

Both are still expected to make the squad, and will be battling for the starting spot on the left side of defence, but there’s a degree of uncertainty with both players.

Manchester United could be in the market for another left-back, and only time will reveal what Shaw’s role is under Erik Ten Hag.

After impressing at the Euros, Kalvin Phillips’ place in the squad is relatively safe. Leeds’ potential relegation and a possible big move are factors that could get in the way for the all-action midfielder, however.

Jordan Henderson could easily have been considered a guarantee – Southgate is bound to want his experience even if he’s a fair way down the midfield pecking order.

The pedigree of Jack Grealish and Marcus Rashford makes them near-guarantees, too, even if their form in 2021-22 has been underwhelming.

Bukayo Saka and Jadon Sancho have been trending in different directions this season. Both should be in England’s first-choice squad at the time of writing, though.

Sancho, like Shaw, faces a big few months under Ten Hag’s leadership as he looks to establish himself at Manchester United.

We’ve got 21 players in the top two categories, leaving only a couple of spots. With poor form and injuries bound to be a factor, though, the final two groups here will likely have a few more spaces to compete over.

There’s such uncertainty over central defence that this is a very centre-back-heavy group.

Any collection of Marc Guehi, Fikayo Tomori, Conor Coady, Ben White, Tyrone Mings, Joe Gomez and Eric Dier could be named in the squad and it wouldn’t be a shock.

There are fewer available spots in the middle third, which could leave Conor Gallagher as the odd man out, particularly if he’s not a starter at Chelsea next season.

It’s tricky to see where James Ward-Prowse and Emile Smith Rowe fit in at the moment.

Tammy Abraham should be a near-certainty considering his form under Jose Mourinho at Roma.

Southgate has been reluctant to pick players outside of England in the past (including Tomori), which leaves Abraham as a fringe player rather than Kane’s backup.

Dominic Calvert-Lewin has 11 caps to his name, and was in the Euros squad last summer. Injuries have made this a lost season for the Toffees striker.

There are rumours of a summer transfer, and maybe a change of scenery is what he needs. Wherever he’s playing, the Sheffield native needs a strong start to next season to get into Southgate’s squad.

With a few months of Premier League action to take place before the midseason hiatus for the World Cup, players not currently in the mix have a chance to force their way into consideration.

They might not swing World Cup predictions, but who knows what impact a substitute can have or how a depth player might need to step up after an injury or two.

The goalkeeping spots behind Pickford could go pretty much anywhere. In the wide-open competition at centre-back, Ben Godfrey and Ezri Konsa stand a real chance, albeit heading into next season with ground to make up.

The full-back group of Kieran Trippier, Kyle Walker-Peters and Tyrick Mitchell are probably depending on injuries. Southgate has trusted Trippier in the past, but it’s a big ask to get ahead of James, Walker or Alexander-Arnold.

Jesse Lingard showed us what he could do in his short stint at West Ham. If he starts 2022-23 in that sort of form at a new club, it’ll be tough for Southgate to leave him out.

Curtis Jones probably needs several injuries to get a sufficient chance at club level to prove himself, while Oliver Skipp would benefit from Spurs getting off to a hot start next term.

James Maddison, Harvey Barnes and Jarrod Bowen have their work cut out to force their way into consideration in positions of strength.

The backup striker job is up for grabs. Abraham and Calvert-Lewin are just ahead as the offseason begins, but Ollie Watkins, Patrick Bamford and Ivan Toney are all in striking distance.