Take a trip down memory lane as we look at every England World Cup kit - which one is your favourite? Also, find the England Qatar 2022 World Cup kits here! 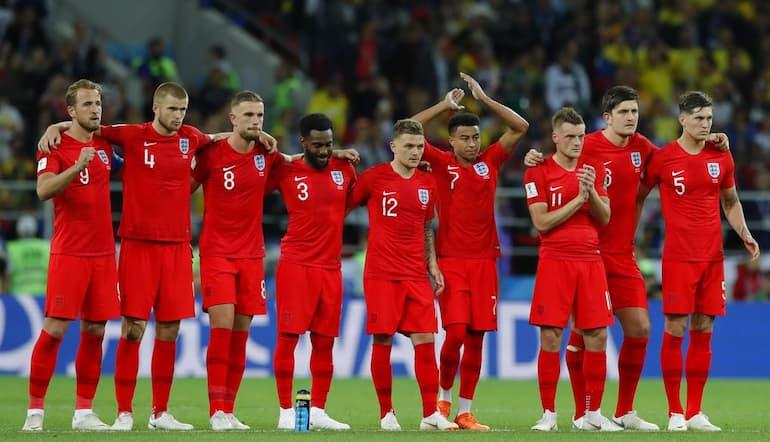 England fans are looking at World Cup football odds years before the tournament gets underway.

World Cup kits are big sellers even when the Three Lions aren’t expected to go on a run.

England Kits At The World Cup:

A few England kits have reached the status of classic, hitting eyewatering prices on the second-hand market and being sold in the thousands as replicas.

Let’s take a look at every England World Cup kit, starting from the nation's first appearance at the tournament in 1950.

After deciding against participating in the first three World Cups, England arrived at the 1950 tournament with classic white baggy jerseys. They had slightly open collars with big collars.

The sleeves were longer than fans are used to, and England even had dark shorts and socks.

The look for the 1954 World Cup had even more extravagant collars. Halfway button-up shirts sloped across the players’ shoulders, too.

While there was sports betting success on the way in the not-too-distant future, the Three Lions were yet to breakthrough on the World Cup stage, winning just one match at the 1954 tournament.

The 1958 team had the unflattering honour of being involved in the first scoreless draw in World Cup history.

Fittingly, a team with such an unexciting accolade had reigned in the shirt design, with the flamboyant collar being replaced by a V-neck.

Short shorts, shorter sleeves and a subtler V-neck was the look for England at the 1962 tournament, where they once again failed to win more than one match.

This was the first tournament of an all-white home kit for the Three Lions.

The most famous of all England World Cup kits, the Three Lions lifted their first (and so far, only) World Cup in their home tournament.

Their simplistic red jersey lives on in colourised photos from the final, but they actually wore white for the majority of the competition.

After years failing to meet World Cup predictions, Alf Ramsay led the Three Lions to the Jules Rimet trophy thanks to Geoff Hurst’s hat-trick against West Germany in the final.

Entering the 1970 World Cup as defending champions, England’s kits were a far cry from the designs of the last couple of decades.

Instead, they looked much more like an ordinary t-shirt with round collars and a slight change at the end of the sleeves.

Of course, it was all white for the home kit with red shirts and socks for the away kit, which was worn in the last eight loss to Germany.

Football kit design had experienced a major overhaul in the 12 years since England last played in a World Cup, and that is evidenced in the contrast between their 1982 kits with their 1970 attire.

With Admiral as the manufacturers, England added a bit of extra colour to their jerseys with red, white and blue bands across the upper chest on the home kit.

The change strip was much the same, though it was a red base with slightly different-sized bands. The shorts also sported stripes down the side.

The 1986 World Cup saw England wear shorts that were definitely too short. The home white jersey had faint stripes with a navy band around the collar featuring white and red stripes.

Gary Lineker won the Golden Boot, but England’s exploits in 1986 are best remembered for Diego Maradona’s Hand of God.

Ending in penalty shootout heartbreak to West Germany in the semi-finals, England’s 1990 World Cup kits are two of the classics.

Sold for hundreds on the second-hand markets and with remakes at every sports shop, these patterned Umbro jerseys were crackers.

The collar was nowhere near as garish as decades past, but the tidily designed navy complemented the jersey nicely.

England’s World Cup 1998 kits would be remembered more fondly if they hadn’t been so underwhelming in the tournament.

The kits were very 1990s. The number and Three Lions badge were in the middle with a wide neck line leading to a red and navy collar on the home kit.

Blocks of colour down the sides made for a more interesting design than many of its predecessors. The away was less complex, yet the shiny, two-tone red was still a strong look.

Umbro nailed the 2002 World Cup kit. Simple in its execution, there was thin navy piping along the shoulders and a vertical red stripe down the chest with the logo placed neatly on top.

Yet again, the away kit was an all-red number, but it worked. These are the sort of kits that you could pinpoint their era from the design alone.

A team with so much expectation, and one of the favourites in World Cup betting, the 2006 group fell far short of expectations.

Umbro tried a similar theme to 2002, opting for a St George’s cross on the shoulder, which only ran halfway down the front.

The nod to the flag was less in-your-face on the red away shirt, but the gold number and Umbro logo wasn’t for everyone.

Hammered by Germany in the last 16, the 2010 kits were every bit as underwhelming as the performances. The collar and lack of other colours on the home shirt were not exactly a favourite.

The away kit just looked like a template with white bands at the end of the sleeves being the only bit of interest.

A squad lacking talent and no wins in three group matches, England’s 2014 World Cup campaign triggered a reset. The kit was in-keeping with the standards on the field.

It was a cautious design from Nike with a blue number in the centre and not much else to write home about. Let’s be kind and say it wasn’t a classic.

The red away kit left plenty to be desired, however, with Nike once again following a pretty bland design.

At the time of writing, England's official kit for the 2022 World Cup in Qatar has yet to be confirmed.

There have been a few leaks online but an official announcement is expected in late summer / early autumn ahead of the tournament.