The Euro 2021 mascot has been confirmed: learn about the UEFA Euro 2020 mascot & previous Euros mascots here... 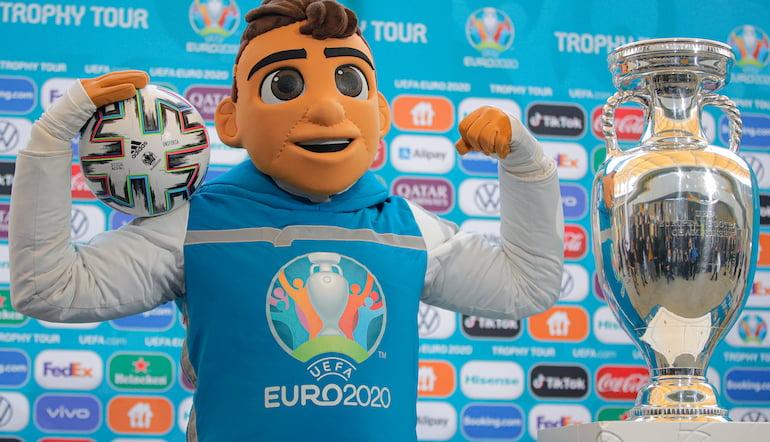 Checking out the Euro 2020 odds, filling out your sticker book and buying a wallchart are numerous summer tournament traditions. The announcement of a Euro 2020 mascot falls into that same category.

There’s a rich history of mascots at major international sporting competitions. Some are iconic, like Footix at France ’98, others disappear into the midst of football history. Euro 2020 will hope to have a legacy comparable to Footix.

UEFA has put a fresh spin on the mascot for Euro 2020. For a raft of reasons, this is a tournament like no other.

Spread across the continent, this is an experiment into a new way of carrying out international football tournaments. It’s going to be a busy few weeks for the Euro 2020 mascot.

Skillzy is the Euro 2020 mascot, partnered by freestylers Liv Cooke and Tobias Becs. As ever, Skillzy hasn’t been a universally popular announcement, and it’s fair to say there was a bit of criticism of UEFA’s announcement.

The organisers of UEFA 2020 describe Skillzy as, “a larger-than-life character inspired by freestyling, street and panna culture".

Back in 2019, Cooke and Becs led a competition for freestylers to send in their own videos to represent their country at the Euros.

Cooke and Becs shortlisted the entries for a public vote to choose two people for each of the host cities. These freestylers would then be performing at selected events.

UEFA have made a concerted effort to embrace freestyle football for this summer’s tournament. While this won’t go down well with everyone, it’s a fun way to bring in a similar, though not always linked, part of the footballing sphere.

Skillzy is a cartoon-style human-type creature. Some have pointed out that the face borders on scary, but UEFA are clearly shooting for the human-like image, and you can understand why.

Other tournaments have featured outlandish, and sometimes downright baffling, mascot choices. This is a straightforward attempt to humanise the mascot, albeit in an unorthodox cartoon form with a topknot.

As with every Euros mascot, Skillzy has a backstory, which UEFA have covered here.

Football fans are bound to see plenty of Skillzy throughout the summer. Victorious teams in Euro 2020 winner odds may have happy memories of the freestyle, cartoon mascot, but will he go into the mascot Hall of Fame or Hall of Shame?

European Championships have featured mascots since 1980. Italy in 1980 was the first tournament to have a mascot. Here’s a complete list of the UEFA Euro mascots history:

Those diving into the world of Euro 2020 Panini stickers will no doubt already be familiar with the Euro 2020 mascot sticker.

Not only a piece of Euros history, Skillzy has a place in the 2020 Euros sticker book. Featuring alongside the official logo, equal game, trophy and Panini logo in Goal’s checklist, the Euro 2020 mascot sticker is a must-have to complete the album.

Having presented on BBC, Cooke is a familiar face for many British football fans, but working as a UEFA ambassador for the Euros will introduce the Leyland-born star to a worldwide audience.

Posting to over one million followers on Instagram, Cooke has developed a massive following and become a social media sensation.

She has previously won the Woman of the Future award and has been a UEFA Women’s Football ambassador since 2018.

Alongside working with the BBC, Cooke has also featured in various television adverts. Some may remember her appearances on Match of the Day and Soccer AM, too.

Announced in 2019, Cooke showed off some skills at the Euros qualifier between the Netherlands and Germany.

The former world champion spoke with great excitement about the role freestyle football will play in the Euros, "Being able to take the beauty of freestyling, street football and panna to football fans all over Europe is a really special opportunity.

"Whether it's playing in the park or on the world stage, whether it is football or freestyling, it's about expressing yourself with the ball at your feet."

With an Instagram following nearing 400,000, Tobias Becs is one of the most well-known freestyle footballers in the world. Becs isn’t going to impact Euro 2020 predictions, of course, but he’s as famous as many of the players involved in the tournament.

Becs, who was born in Oslo, also owns and runs the 4Freestyle apparel company. They specialise in footwear specifically for football freestylers. On top of that, he’s a world record holder for the snazzily named Alternative Mitch Around The World.

Having previously performed in front of all-time greats like Roberto Carlos, Becs is more than prepared for the spotlight at Euro 2020.

Quoted on the UEFA website, the Norwegian freestyle champion spoke very positively about his role at Euro 2020, "UEFA EURO 2020 will be one of the biggest sporting events in history, and the involvement of freestyle culture will only enhance it as a spectacle and make sure there is something for everyone.