The 2022 World Cup mascot has been revealed as La'eeb, the Qatari ghuntra. What is the World Cup 2022 mascot and how was he announced? 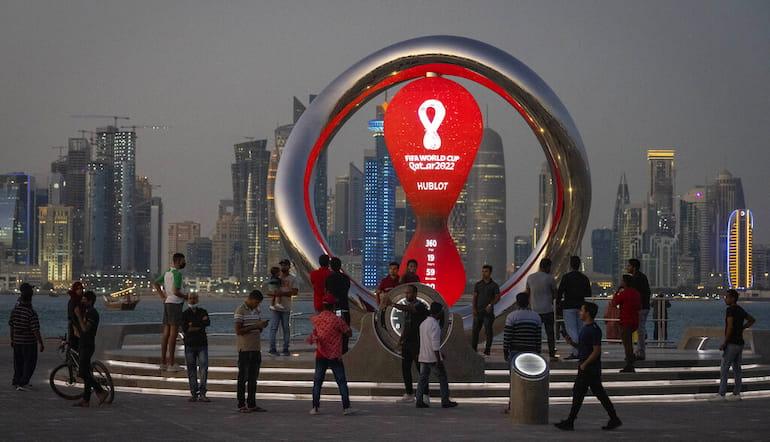 As we edge ever closer to the 2022 World Cup in Qatar, we’re starting to see more official announcements relating to the competition.

Earlier this year, FIFA revealed the official mascot of this year’s tournament – La’eeb, based on a traditional piece of Qatari clothing.

Described by football’s governing body as “super-skilled”, La’eeb comes from an alternative universe inhabited by World Cup mascots but takes the form of a Qatari ghutra.

While the official mascot won’t impact football betting odds in any way, shape or form, the reveal is a key moment in the shaping of the tournament.

FIFA believe that La’eeb can “bring the joy of football to everyone” and hopefully the 2022 World Cup mascot will be a hit with fans from around the world.

La’eeb was revealed in a video with RedOne, a Moroccan-Swedish singer-songwriter who is FIFA’s Creative Entertainment Executive.

In the clip, La’eeb – the official mascot for the 2022 World Cup in Qatar – transports RedOne to ‘Mascotverse’, the cartoon parallel universe inhabited by former WC mascots.

England fans will be glad to know that World Cup Willie, selected mascot for the 1966 World Cup, was clearly visible stood waiting for a London double decker bus.

Is that an omen for positive things for England this winter? World Cup betting odds have the Three Lions at 13/2 to lift the trophy in Qatar.

Meanwhile, there were plenty of other famous World Cup mascots in the video – including the likes of Nranjito (Spain 1982), Juanito (Mexico 1970) and Pique (Mexico 1986).

The concept behind La’eeb is to encourage everyone to believe in themselves, with FIFA also adopting the slogan “Now is All” as the mascot’s tagline.

Upon announcing La’eeb as the official 2022 World Cup mascot, FIFA spokesperson Khalid Ali Al Mawlawi revealed: “We are delighted to unbeil La’eeb as the Official Mascot for the first World Cup in the Middle East and Arab world.

"He comes from the mascot-verse – a place that is indescribable. We encourage everyone to imagine what it looks like.

“We are sure fans everywhere will love this fun and playful character. La’eeb will play a vital role as we engage fans young and old in Qatar’s FIFA World Cup experience.”

While La’eeb isn’t your stereotypical football mascot, he could yet be a major hit with fans around the world – only time will tell.

Essentially, La’eeb is a ghutra – an Arabic term for a headdress. Contrary to popular belief, La’eeb is not a ghost, nor is he a stingray.

Fortunately, spectators are likely to see the real ghutras around the host cities and stadiums throughout the 2022 World Cup in Qatar.

Also known as a keffiyeh, it is a popular Qatari fashion piece often sported by dignitaries and La’eeb’s presence is likely to be felt, even when he is not visible during matches.

La’eeb has been officially confirmed as the FIFA World Cup mascot and, like Zabivaka, Fuleco and Zakumi, is set to be unleashed on several social media platforms, with downloadable stickers, GIFS and filters.

An official press release published by FIFA reads, “La’eeb is a fun and mischievous character who comes from the mascot-verse. La’eeb can be a figment of your imagination. He is whoever a football fan wants him to be.”

La’eeb claims to have attended every previous FIFA World Cup in the mascot-verse, stating that he “contributed to some of the most famous moments in football history”.

The Qatari ghutra even suggested in the official mascot unveiling video that he played a part in Diego Maradona’s infamous “Hand of God” goal as well as Robin van Persie’s long range diving header against Spain in 2014.

World Cup mascots by @EmilioSansolini. Which is your favourite? pic.twitter.com/Bo06pEzrJG

The legacy of La’eeb will undoubtedly be determined by how successful the 2022 World Cup is on the pitch as much as his impact off it.

Social media was highly critical of La’eeb initially but fans have started to warm to the concept – though it is hard to say how he will rank against other World Cup mascots.

As the 2022 tournament draws closer, World Cup predictions will be available on every match this winter. Here’s to hoping La’eeb is remembered in a positive light.