Which referees will take charge at the 2022 World Cup in Qatar? We examine the selection process the World Cup refs list for 2022. 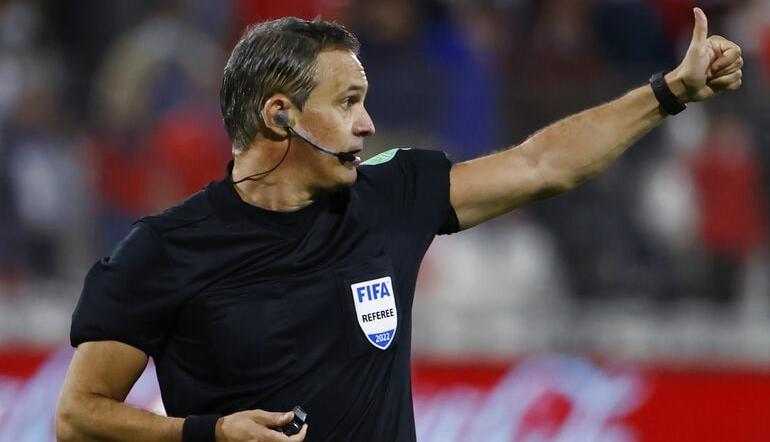 Researching referees is a standard part of football betting online.

Learning the tendencies of officials is important in all forms of football, and that doesn’t change when the World Cup rolls round. Just like players and managers, taking part in a World Cup is a huge honour for referees.

Being selected for a tournament means an enormous amount of pressure too, though. A mistake can ruin the hopes of a nation.

Even if it doesn’t swing the outcome of a match, errors will go down in the history of the sport, impacting an official’s legacy. Just ask Graham Poll.

The FIFA World Cup referees in 2022 could become a live betting story. The use of technology has intensified the glare towards officials if anything. There is nowhere to hide with millions around the world watching every decision.

Only the best of the best will play in a World Cup, and it’s meant to be the same idea for referees.

Of course, there are a fair few criteria for aspiring World Cup referees to check off before they can hop on the plane, and FIFA makes sure that there is a geographical split, too.

This is the pinnacle of the sport, and as such, referees must have demonstrated an ability to cope with the biggest fixtures.

Experience is a must. Let’s take a look at the FIFA World Cup referees selection process.

To start with, referees must be Grade 1 to stand a chance at featuring in World Cup betting fixtures. Assistant referees can be Grade 2. Every single referee is given a grading by FIFA dependent on their previous experience and qualifications.

A Grade 1 FIFA referee is the highest level attainable – they must be at least 25 years old, and have passed various tests.

For an official to reach that level, they must have been nominated by their Football Association. For instance, the FA can nominate a select number of officials each year.

Keeping up with the pace of play is crucial in high stakes World Cup matches -- making sure officials have high levels of fitness is a necessity.

Only Grade 1 referees have a shot at being selected for a World Cup. This process took three years for the 2022 tournament in Qatar.

Conducted by the FIFA Referee Assistance Program, referees are in teams of three. The Club World Cup was used as a yardstick to measure officiating performance.

Ultimately, a list of 52 refereeing teams was developed based on officiating standards.

Created by the FIFA Refereeing Department, it was possible for refereeing teams to be eliminated from this list if fitness tests were failed or they fell short in other areas.

From the pre-tournament selection of 123 referees, both match referees and assistants, the group is narrowed down to around 80.

Of those given the nod to head to the tournament, they will be split between referees taking charge of matches and a support group.

The support group will be a backup for any injuries or illness to the match-allocated officials, but will also take on the responsibilities of fourth and fifth officials.

Of course, recent tournaments have increased the pool of referees due to the introduction of video-replay. These referees are also part of the selection process.

Every referee heading to a World Cup dreams of getting the World Cup final gig. The teams involved will eliminate some candidates, and the allocation of previous fixtures can play a part in the decision to select a referee for the final.

Argentina has had the most representation in Men’s World Cup final history, having had nine referees involved. However, just two Argentinians have been the match referee.

Three Englishmen and three Italians have fulfilled that role, including the iconic Pierluigi Collina in 2002 and Howard Webb in 2010.

While FIFA usually confirm a list of 36 referees for a World Cup, there are 35 on the initial list ahead of Qatar 2022.

The final group of officials will be confirmed one month before the opening game but the vast majority of referees in action at the tournament will be regulars in European football.

Unfortunately, 2021 Referee of the Year Damir Skomina retired at the end of last season and will not be appearing at the 2022 World Cup in Qatar.

However, that leaves the door open for one of the following to shine on the biggest stage of all. Without further ado, here are the officials that look set to appear at this year's tournament.

As the 2022 FIFA World Cup draws closer, we'll have a better indication as to which officials will take charge of each match throughout the tournament.

Come back here for an updated view on referee appointments at the 2022 World Cup in Qatar - starting of course with the opening match of the competition on November 21st.

As with World Cup predictions and tips, appointments will be published as and when made available. Fingers crossed every official involved at the 2022 World Cup enjoys a successful tournament and mistakes are at a premium.