Appointing a former player as a manager can be risky - but is it a risk worth taking or is it a big mistake? 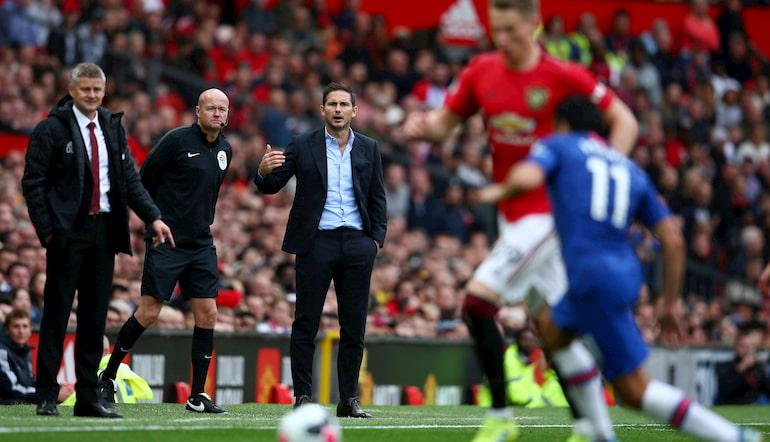 Andrea Pirlo, Ole Gunnar Solskjaer, Frank Lampard and Mikel Arteta have all been hired to high-profile managerial jobs over the last 18 months.

Former players at the clubs they now manage, none of the four had the experience or track record to warrant the appointments.

Appointing these club icons is not a new phenomenon. Zinedine Zidane, Luis Enrique, Pep Guardiola and swathes of others have followed the path. It’s a well-trodden route at all levels of football.

These hires feel different, though. Guardiola and Zidane had earned their stripes at Barcelona and Real Madrid’s respective ‘B’ teams. Enrique did the same before stints elsewhere.

Solskjaer managed Manchester United reserves almost a decade ago before two spells at Molde. A poor period as Cardiff manager was sandwiched by the two spells in Norway.

Lampard had one season as Derby County manager, Arteta was Guardiola’s assistant from 2016 until his appointment as Unai Emery’s successor. Pirlo has the least experience of the lot.

There’s nothing revolutionary about putting a massively popular former player in the dugout.

The fact that four of the world’s biggest clubs have taken the step over such a short period suggests a trend, a move away from the proven, experienced managers previously given such jobs.

Attempts can be made to justify each decision in isolation. Solskjaer took Manchester United on a good run after replacing Jose Mourinho.

Lampard had overachieved with Derby County and cheered up fans after a rocky relationship with Maurizio Sarri. Arteta had a similar impact following Emery’s ill-fated Emirates tenure.

Pirlo, like Lampard, followed Sarri, and could be argued as Juventus’ final roll of the dice to win the Champions League with this ageing core.

Where teams often pursue big names in the transfer market, the same could be argued for the dugout.

Opting for a former player is one way to secure a name fans recognise, and perhaps it’s a direct result of the dearth of recognised top managers right now.

Mauricio Pochettino was an obvious appointment for Juventus and Manchester United, but other than that, options are limited.

One could argue Pochettino hasn’t proven he can win trophies at the highest level, though it’s a reductive, unfair line of attack.

Arsenal, Juventus, Manchester United and Chelsea have all tried and ‘failed’ with proven football managers.

It may be a simplistic way to look at it, but Lampard, Arteta, Pirlo and Solskjaer are a way of trying something different. They are a new face to the top-level managerial game, managers who have everything to prove and very little to lose.

Each of the four will retain their status at the club regardless of their managerial performance, just as Kenny Dalglish has at Liverpool and Alan Shearer did at Newcastle.

There’s no quantifiable impact of bringing in a manager the fans already like. It earns the manager a longer leash, however, and in some cases, the owners will see it as a means to ease pressure.

Arsenal’s fans showed their displeasure with the latter days of Arsene Wenger and Emery – Arteta immediately has more time to play with than the former Sevilla manager.

With that buffer, these managers have a chance to build something. Football management is a ruthless world, but Lampard, Arteta, Pirlo and Solskjaer have more margin for error from the fans, and potentially from ownership too.

Their playing career cannot be ignored as a factor in day-to-day management, too. They can relate to players in a way that others may not be able to. Current players will respect them for what they achieved on the field.

It’s no surprise to see a player compelled to work with the world’s best managers like Jurgen Klopp and Guardiola.

We have already witnessed these former players have a similar impact – Lampard’s reputation played a part in Chelsea landing several of their summer signings.

Lampard was at the peak of his powers when the world’s best young players were growing up. It’s akin to the influence Zidane had on Real Madrid’s new signings (particularly Eden Hazard).

Other managers can, of course, help to attract players to the club.

Players are desperate to move to Leeds United to play for Marcelo Bielsa, and Carlo Ancelotti’s presence has made Everton a more attractive destination, but would Chelsea have been able to lure Kai Havertz or Thiago Silva to the club without Lampard?

Other sports are well aware of the importance of former player to current player relationships. Football is no different.

For all the positives of hiring former players, it is far from a guarantee of success. It’s a gamble, but with minimal downside.

The club hierarchy will not be mocked for making a popular appointment. The fanbase’s relationship with their club great will likely remain untarnished.

Juventus, Chelsea, Arsenal and Manchester United did not make identical decisions. Each should be evaluated individually, but the general trend is an interesting development in football management.

It’s unlikely Solskjaer, Arteta, Lampard and Pirlo are all a success. The jury is still out on the Premier League triumvirate, though Arteta has been the most impressive of the bunch so far, despite no managerial experience.

He had the best apprenticeship any manager could wish for under the guidance of Pep Guardiola.

Maybe there is nothing to read into these appointments. Or perhaps it’s a sign directors and owners are increasingly concerned with fans’ opinions. Perhaps it’s clubs appointing managers the players want.

Broadly, there’s nothing wrong with hiring former players. Only time will tell if Chelsea, Arsenal, Manchester United or Juventus made a mistake.

Keep up with the latest Premier League odds to see how Lampard, Arteta and Solskjaer are getting on.