Who makes the cut to feature in our all-time Bundesliga starting XI? 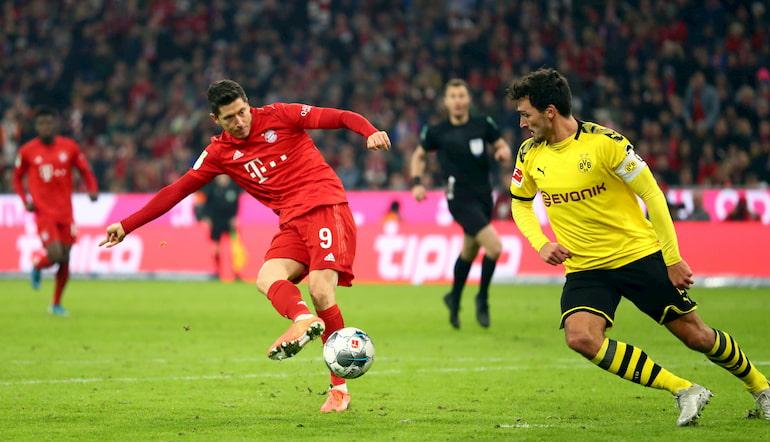 Always one of the top leagues in European football, the German Bundesliga has been dominated by Bayern in recent years, but our all-time Bundesliga XI spreads beyond Bavaria.

Unsurprisingly, the majority spent a lot of time with the Munich giants, however.

A strong Bundesliga has often been reflected in the German national team. There is a distinctly German feel to this XI, many of these players thrived on the international stage as well as in Bundesliga action.

There’s a bit of tactical license given in the selection of this team, with only one natural winger selected.

It’s likely a 4-3-3 with one of the strikers playing very narrow, or it could be a diamond in midfield with Arjen Robben given a free role at the top. Either way, this is a formidable XI.

There was strong competition for the goalkeeper spot. Either of Sepp Maier and Oliver Kahn could have been selected. There’s no wrong choice here, and perhaps the decision to go for Manuel Neuer is a bit of recency bias.

Neuer’s CV is hard to argue against, though. He’s finished third Ballon d’Or voting, he’s a four-time UEFA Goalkeeper of the Year, he’s won eight Bundesligas, a Champions league and a World Cup.

The brash confidence of Neuer, when playing well, spreads throughout the team’s defence. His ability to sweep has enabled his teams to play how they want to.

Not many all-time greats get overlooked as much as Philipp Lahm. Perhaps that’s the result of being a one-club man, perhaps it’s the life of a full-back.

Lahm won it all, he adapted to different managers, moving into midfield late in his career and led Bayern to success upon success. He was as reliable as they come throughout his career – an easy choice for right-back.

Forget Bundesliga XIs, Franz Beckenbauer would walk into an all-time team. He’s quite simply one of the greatest footballers of all-time, a World Cup winner, a three-time European champion and a natural, immense leader.

Der Kaiser revolutionised the game. He controlled matches wherever he played, starting in midfield and moving into defence. Twice named European Footballer of the Year, Beckenbauer was more than a solid central defender.

He was the first name on the team sheet.

Where Lahm and Beckenbauer were straight forward, this was a trickier pick. Mats Hummels gets the nod, a player who has starred for brilliant teams in the yellow of Dortmund and red of Bayern.

Having returned to Dortmund, Hummels is no longer playing for the football betting favourite, and his best years are behind him. Those peak season, however, were brilliant, and he was among the top few defenders on the planet.

As versatile as they come, Andreas Brehme could play on either flank and was a rare player who could take set pieces with either foot. He did so throughout his career and possessed an almighty shot from range.

He would get forward often and made up for pretty average pace with superb football IQ. Brehme played a key role in two Bundesliga winning sides – Bayern in 1986-87 and Kaiserslautern in 1997-98.

Bastian Schweinsteiger did all the simple things right. He was a calming presence in Bayern’s midfield, a player who kept things ticking over. The former Manchester United man was a German champion eight times and lifted the Champions League in 2013.

A player who made others around him better, Schweinsteiger was not as spectacular as some other midfield greats in his generation, but he was every bit as important to his team.

The Bundesliga wasn’t at its strongest during Michael Ballack’s career, but that’s no barrier to his place in this team.

The combination of his physical attributes with his two-footedness, eye for a pass and tackling ability made him a complete package in midfield.

He has the medals to show for what was a brilliant career, yet he could have remembered yet more fondly if the 2001-02 season had finished differently – Ballack finished runner-up in the Bundesliga, DFB-Pokal, Champions League and World Cup.

Matthaus, throughout his long career, amassed over 100 appearances for Borussia Monchengladbach, Inter and Bayern (twice). He is one of two players ever to play in five World Cups.

Like so many who survive so long at the top, Matthaus developed from all-action midfield to a deeper role. At his best, he did it all in the middle third; well-timed tackles, judged passes and occasional goals.

Across his two stints in Munich, Matthaus was a key player in separate periods of Bayern football betting tips dominance.

The presence of Arjen Robben was enough to alter German Bundesliga betting. If any football fan is asked to imagine a player cutting in from the right onto their left foot, Robben will be first player that comes to mind.

The Dutchman’s trademark move was so predictable, though still unstoppable. After spells with Chelsea and Real Madrid, he settled with Bayern, spending a decade at the club, terrorising Bundesliga full-backs.

Across his time with Dortmund and Bayern, Robert Lewandowski has become the third-highest scorer in Bundesliga history. He will be a frequent feature in our European football betting picks.

Lewandowski has won titles with both teams – he’s been one of the five best strikers in the world for the best part of a decade. Back to goal, running in behind, competing for crosses; Lewandowski can do it all. He’s a complete centre forward.

Der Bomber holds goalscoring records galore. He scored over a goal per game for West Germany, and found the net over 560 times for Bayern.

His 365 Bundesliga goals for the Bavarian superclub is miles clear of anyone else – Klaus Fischer, his nearest challenger, is almost 100 goals behind.

Muller was an unspectacular footballer, not fitting the appearance of a champion athlete. His game was about well-timed movement over short distances and clinical finishing. There have been few poachers in the history of the game who even deserve comparison to Muller.

Football Betting Tips
Bundesliga
About the Author
By
Sam Cox