David Bentley EXCLUSIVE: Arteta Needs To Gut Half His Squad But The Arsenal Board Won't Allow It!

We spoke to David Bentley about the latest Premier League news and rumours - the former Arsenal man reckons Mikel Arteta needs to make major changes at the Emirates Stadium... 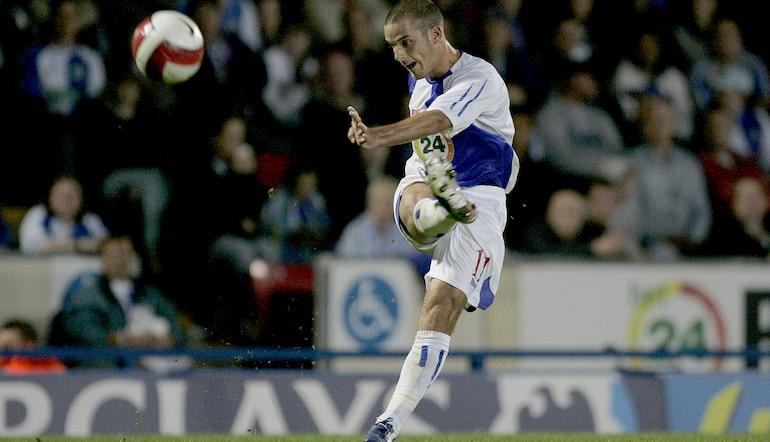 By his own admission David Bentley ‘blew hot and cold’ during a career that saw him capped seven times for England and run out 184 times in the Premier League.

When he was hot the Peterborough-born playmaker had the rare ability to conjure up goals that stay long in the memory, including a spectacular 43-yard volley in the North London Derby. He was brilliant on his day.

When he was cold it was often a result of disillusionment, either at a manager or sometimes a sport that had little time for individuality.

"You can’t be robotic and calculated,” he says now about a strong sense of conviction that led to him retiring aged just 29. “That’s the best thing about me and the worst.”

Here, the much-travelled maverick revisits his former clubs, offering his thoughts on their present circumstance as well as dipping his toe in the past. We begin at the Emirates and a side struggling to embrace the future.

Bentley shot through the ranks at Arsenal, quickly gaining a reputation as England’s next-big-thing.

Despite being dubbed ‘the new Beckham’ however his opportunities were extremely limited, which perhaps shouldn’t surprise in an era that saw Arsene Wenger’s men crowned as ‘Invincibles’. Bergkamp, Ljungberg and the like are hard to budge.

Fast-forward to the here and now and youth is once again on the agenda, only this time there are a number of highly promising kids all staking a strong claim for a starting spot.

Bentley has been so impressed by Bukayo Saka, Gabriel Martinelli and Joe Willock that he believes Mikel Arteta’s new-look team should have the teens placed front and centre.

“Youth development has always been Arsenal’s strong point. It was when I was there. The systems are there in place along with the type of football they want to generate and there will be lots of opportunities for them.

"If they can just get the foundations in place so they have the right experienced players to help them then Arteta’s model will be to allow young players to develop. As long as he is given time his style of football is good for that.”

There is a hitch though to this plan and it takes the form of established, under-achieving players clearly not making way anytime soon.

Gooners and rival fans alike were shocked this week to discover that the accident-prone David Luiz has been awarded a contract extension and watching on as a fan Bentley reacted as we all did.

“I was surprised at the new contract. I don’t know if it’s because of a lack of preparation in getting players in but the recruitment with the back four is a problem. It always has been.

"David Luiz is problematic. He’s a great technical player but if you want to bring the youth through and create a winning mentality is he really the type to help with that?”

“You look at Liverpool – and Manchester United are trying to do it too – and they build a solid foundation that allows the players to express themselves.

"If you have solid back-four and solid spine of the team it’s easier for the young players to step into that. Instead Arsenal leak goals and look vulnerable.”

It is a situation brought about by financial restraints that has left Arsenal looking to their big names to pull them through only to be let down time and again. It’s a situation that has the Gunners languishing in mid-table.

“Mesut Ozil and David Luiz are on large money and if Arsenal can move these players on then Arteta will be able to spend money on transfers.

"I don’t know what the thinking is at boardroom level because Arsenal need to ship out half the team and get a good core in. That’s difficult but can be done.

"The major problem is that we don’t know if they’re singing from the same hymn sheet at boardroom level."

Only a very select few have played for both North London giants and Bentley is among them.

In 2008, after excelling for several seasons for Blackburn Rovers, the midfielder ignored the advances of Manchester United and joined Harry Redknapp’s revolution at Spurs, sold on a ‘project that never materialised’.

There, he played alongside Gareth Bale, a player ‘who could do anything’, and Modric also, and much like the Pochettino period that followed, Tottenham were a joy to behold, turning on the style whenever the mood took hold. They just forgot to win silverware each time, that’s all.

Enter the serial winner Jose Mourinho whose determination to install some substance into the team seems to have come at the cost of the style Spurs supporters hold so dear. For Bentley it’s a sacrifice that doesn’t make much sense.

“Tottenham and especially the fans – and I know hundreds of them – are used to entertaining football. They want their players to express themselves and they want that kind of football.

"They have been spoilt with that kind of football and through Redknapp and Poch they have enjoyed a successful period and seen some good football under both managers.

"A lot of it has been front-foot football, pressing from the front whereas Mourinho’s teams sit deeper and it’s a different way of playing. I can see why that frustrates because playing deeper is a bit boring.

"This is the method he sets his teams up and they sit in banks and spring from that and I don’t think it suits the players like Son and Lamela.”

With Tottenham’s main men struggling to adapt to the Special One’s rigid demands it has left them adrift in the league, with a top four place now looking impossible.

Might this mean Harry Kane and co could be looking to move on in the next window?

“When you have Daniel Levy in charge people won’t leave unless it’s financially correct for the football club.

"We will have to see how badly the club miss out on gate revenue because that’s what the stadium was built for and Champions League football is where the players want to be. But nobody will leave unless there is an extraordinary offer that’s for sure.”

If the 35-year-old is right – and record-breaking sales in the past suggests that he is – that surely means Dele Alli will be staying at the Lane for a while yet.

For Spurs fans this would be great news but a substantial downturn in form in recent times remains a serious concern.

Like Bentley, the England international is a creative midfielder capable of the sublime. Like Bentley, he can frustrate as much as he can excite. His thoughts on Alli’s journey therefore is very much worth noting.

“Alli has proven what he can be. He’s a great player with lots of ability. But he’s had a dip. Maybe his personal life is a bit different and he’s lost a bit of focus or something but as soon as he has that back he will come good again.

"There have been a couple of injuries but he’s still at a young age. I think most players have that during a career – you have to recharge again.

"Hopefully this has just been a recharging twelve months and he goes again because it’s a niche thing that he has. Not many can do what he does.”

It was at Ewood Park where Bentley established himself as a genuine talent, winning the club’s Player of the Year award in 2007 and breaking onto the international scene in the process.

Under Mark Hughes he was urged to show what he could do and take chances and it is this freedom to create that he feels is severely lacking in the English psychological make-up. As his views on the present England set-up demonstrate.

“I wish England had a Bruno Fernandes but as a society we don’t like that sort of player: we don’t encourage it. It goes all the way back to Gazza. We need creative players and to give them that responsibility.

"We need players who can do what they want but the English way is to question that: what are you doing that for? You’re not better than us.”

With this in mind, it hardly surprises to learn that one of Bentley’s favourite team-mates from a decade at the highest level was a Turkish maestro who strolled instead of ran and picked passes out for fun.

“Tugay was brilliant. He was just smoking his cigar all the time, literally. He had that old-school, European relaxed attitude that meant he could just turn up and turn it on.

"He never lost the ball and had such awareness. Could spray the ball anywhere, technical with both feet and scored some great goals.

"Tugay was brilliant and he would have made any team tick. He was probably under-rated. He was married to a basketball player. She was something like six foot eight and he was only five foot six!”

Now a successful businessman with a string of bars and restaurants, Bentley has scant time for looking back on his footballing fortunes. When he does though it’s often to Blackburn where he’ll reminisce: a career zenith.

It saddens him then to see Rovers in the Championship but he takes heart in their recent good form that has put them on the periphery of the play-offs.

“Generally a team that finishes sixth does well. Blackburn is a great football club and the area has good solid people. I loved it there so I hope they do gather momentum and go up.”

Bentley made just the one league start under Wenger before being loaned to Norwich City for a season that ultimately ended in relegation even if the player himself impressed.

For the youngster it was a steep learning curve and for that he will always be grateful to the East Anglian outfit.

“I remember the first game I played. Phew, the pace of Premier League was very different to what I was used to so they helped me a lot.

"I owe a lot to Norwich and I enjoyed my time there. They’re a great football club and they give you a chance.

"Malky Mackay and Paul McVeigh were the big characters. Then there was Phil Mulryne who is training to be the Pope now in the Vatican. You wouldn’t have believed that if you played with him, with his red Ferrari!

"We had a good team spirit there with Darren Huckerby and Gary Doherty, the Ginger Pele. Every day was good old-fashioned banter and the whole club is built on a family friendly feel. I loved it there.”