Jermaine Pennant EXCLUSIVE With 888sport: Sorry Arsenal Need To Put A Call In To Pochettino! 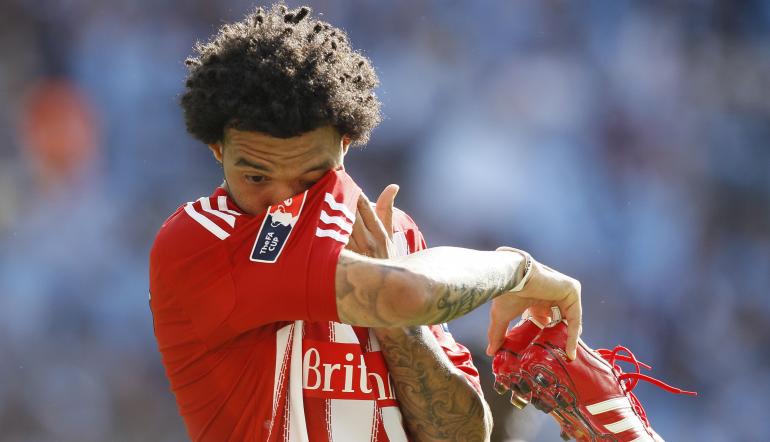 “I don’t know if the players have lost faith or it’s the noise surrounding whether he should stay or go, but seeing the team selections and what is happening with Xhaka and the performances on the pitch I don’t think even the players know what their best formation is.

"It does need a shake up and they should really be putting in a phone call to Poch.”

The prospect of Mauricio Pochettino inhabiting the Emirates dug-out anytime soon is one that fills all Tottenham supporters with a deep dread and brings with it all manner of Shakespearean themes, namely that of betrayal. Pennant insists however that loyalty cuts both ways.

“At the end of the day he didn’t ask to leave. He got sacked by Spurs so he’s got every right if he wants to stay in North London where his family has probably settled. Arsenal is a big club and bigger than Tottenham as a whole.

Poch has said his goodbyes and he has shown how much he cares about Spurs but if Arsenal come calling it’s Spurs who are the ones who have missed out for sacking him. I don’t think there would be any disrespect. It’s a job and we all have to work.”

We do, and it could be argued that if the Gunners stars had worked that bit harder this season the contentious switch across town wouldn’t even be a possibility. Pennant clearly agrees.

“The players have got to look at themselves because there is only so much that the manager can do. He can give instructions and pick the team but he can’t pass the ball for you. And some of the goals they are conceding are not due to the manager.

"They need to look at themselves and be more energetic. Defend like every game is a cup final. Instead they’re half-hearted like they’re trying to get Emery sacked.”

If it’s all doom and gloom at the Emirates right now the very opposite applies two hundred miles north at Anfield where Jurgen Klopp’s Reds are positively flying.

A third of the way through the Premier League campaign and Liverpool are not only unbeaten but presently look unbeatable and with Pennant having been involved in Arsenals incredible ‘Invincibles’ season of 2004/05 does he believe an unlikely repeated history might be on the cards?

“For Liverpool to only lose once last season and not win the league; that was unheard of and will never be replicated again. This season they are more prepared and have more experience of being in that situation and that is showing through now.

"They’re picking up late goals where last season they were holding out for the draw. They’re learning from past experience. They are better equipped this season to go unbeaten and have all the fundamentals there to go one better than last season.”

Their tremendous run of course can largely be attributed to possessing a formidable and ferocious front three with Firmino a one-man force of nature and Mo Salah petrifying defences for fun.

Yet this term the Egyptian – for all of his magic – has not taken top billing as Sadio Mane continues the blistering impact that recently saw him nominated for the Ballon d’Or.

“You have to go on form and although Salah has been top goal-scorer for the past two seasons, Mane has started off on fire, not just with goals but assists.

"His work-rate is phenomenal and that shows what kind of character he is: when you’re the top goal-scorer and you work as hard as he does that speaks volumes in itself.

"What Mane does for Liverpool means he is the main man. At the minute he has taken the limelight from Salah.”

A speedy and tricky wide-man Pennant spent three years on Merseyside, putting in a star turn in the 2007 Champions League final and exciting the Kop on a weekly basis for good measure.

A decade on though the 36-year-old suspects his services would not be needed, with Trent Alexander-Arnold dominating the right flank all by himself.

“He is the perfect modern full-back and what helps is that Liverpool play with a formation where they don’t have to play with wingers. They compact that midfield and when Trent goes forward he has the ability of a winger who puts the balls in, like I used to do.

"He is basically doing my job while also defending. They have only conceded 11 goals so he can defend while also going forward. If you look at all the great teams now their full-backs are like Trent.”

Another stand-out performer in a stand-out campaign so far for Liverpool is their Brazilian holding midfielder Fabinho who has overcome a mixed opening year in England to become an integral figure in the Reds’ title march.

Just how highly does Pennant rate a player who is fast making exceptional displays the norm?

“Fabinho is definitely in the top three in the world along with Kante and Frenkie De Jong at Barcelona.

"At such a young age for De Jong to come into Barcelona and boss that midfield speaks volumes and we saw last season with Ajax against Tottenham how he controlled the midfield then. He is remarkable.

"So I wouldn’t say Fabinho is the best in the world but if he keeps improving his value will keep soaring.

"Defensively Kante has it but Fabinho is in there fighting with them and that’s great for Liverpool. He’s not number one, but he is definitely top three.”

Which leaves us only with the boss; the man who has orchestrated the rise and rise of a club that is once again perched at the top after many years in the relative wilderness.

Would winning the Premier League see Jurgen Klopp stand shoulder to shoulder with the great managers who have come before him?

“He would definitely be up there. Liverpool have never won the Premier League so that in itself would boost his credentials right near the top. You can’t take away what previous managers have done for the club and the history they have created.

"Shankly put Liverpool on the map and made them the massive club they are. But Jurgen has taken them to two Champions League finals and won one. He finished runners-up in the league and now potentially could win it this season.

"So without a shadow of a doubt that would put him in the hall of fame of managers for Liverpool.”

Like every supporter Pennant is at pains to stress that nothing has been won at this stage and there is still a long way to go.

But with Liverpool currently boasting an eight point lead and having not yet even hit top form maybe it’s fair to imagine what the celebrations will be like in May should they go all the way.

“It would be absolutely huge. Massive. I know that winning the Champions League was a great moment for the city but winning the league would be that little bit more special. They are much looking forward to it and now it just has to come true."

Who Will Win The Premier League?

Who Will Win The Golden Boot?

First Goal Scorer Will Be...