Who makes our Liverpool-Manchester City combined XI ahead of Sunday's huge Premier League clash at Anfield? 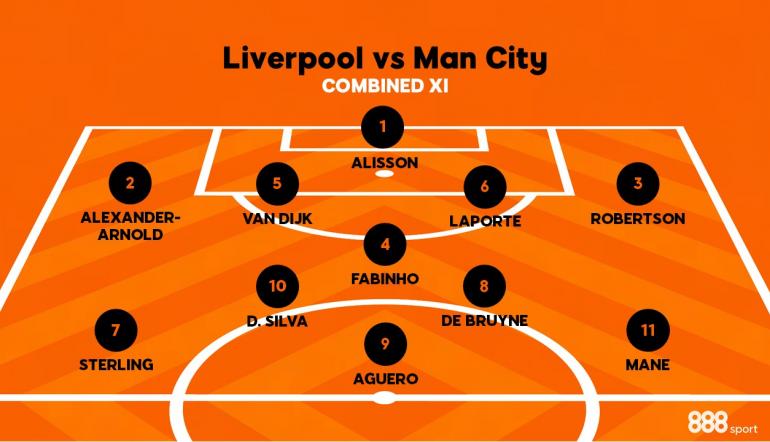 Jurgen Klopp and Pep Guardiola have started to get into the top-of-the-table rivalry spirit as well, firing across the occasional remark that can be labelled ‘mind games’ and referred to as a ‘war of words’ in the tabloids.

Liverpool have been superb so far this term. Manchester City have been vulnerable defensively. With what’s at stake, this could be one of the Premier League’s biggest wins – Liverpool would be very hard to stop if they claim victory on Sunday.

As good as a toss of a coin, this.

Alisson and Ederson are the two best goalkeepers in the Premier League, superb at reading the game and good distributors. Ederson is the better passer of the two, but Alisson just gets the edge as a shotstopper.

Ederson went off injured at half-time during Manchester City’s match against Atalanta in midweek. If he’s absent this Sunday it could have a major impact on Premier League betting.

Alexander-Arnold has his issues defensively, but as an offensive player, he might just the best at his position. In this theoretical team, Alexander-Arnold would have license to play as he does for Liverpool.

His creativity would make a real difference against the inevitable low blocks.

Virgil van Dijk hasn’t been at his very best this term – Joel Matip has been superb – but there was no way the big Dutchman could be left out of this side.

Few defenders transform a unit like van Dijk did at Liverpool. The defense is notably more assured when he’s on the field.

Like many players, Aymeric Laporte was underrated until his injury. City’s defense has been comedic in his absence.

He’s not going to feature this weekend, but there’s no question the Frenchman is the best non-van-Dijk defender in the Premier League.

Matip has staked a claim for this spot in the side, but a healthy Laporte is still well ahead of him..

Probably the easiest pick in the back five, Andy Robertson is an offensive force and isn’t as vulnerable defensively as Alexander-Arnold.

None of City’s options come close to Robertson. He’s not quite as varied as an attacking player as Alexander-Arnold, but that’s hardly a criticism.

Fernandinho has owned this spot in recent years. Fabinho has succeeded the Manchester City spoiler as the top defensive midfielder in the Premier League, however.

The lynchpin of the Liverpool midfield, Fabinho’s presence allows Klopp to tweak the midfielders around him while keeping the defence protected.

His role dealing with Kevin De Bruyne and one of the Silvas this weekend will be vital.

Kevin De Bruyne, like a few others in this team, would deserve a spot in a World XI. As a result, a place in the midfield trio of this combined XI is obvious.

The Belgian is on course to shatter all manner of Premier League assist records. He’s got over double as many assists as anyone else so far this season.

De Bruyne has played some of the greatest passes in Premier League history – even if you know what he’s going to do, it’s not easy to stop it.

Although he’s unavailable for this weekend, David Silva gets the nod over his namesake Bernardo for the second advanced midfielder spot.

These are the positions City excel in, and while Naby Keita remains no more than a squad player, it’s Liverpool’s main weakness.

Silva, who was named in our all-time Premier League XI not so long ago, has aged gracefully. Just a couple of months from his 34th birthday, he’s still one of the best midfielders around.

The Sadio Mane versus Mo Salah debate has been bubbling along for a long time.

Mane has been superb throughout 2019, and he offers more to the team than his teammate Salah, who remains a relentless goalscorer.

Mane is a nightmare for opposition defenders. His movement is intelligent, and electrically fast. He presses well and his close control is underrated.

Roberto Firmino is great at what he does, but he can’t keep Sergio Aguero – one of the all-time Premier League greats – out of this side.

Aguero is as clinical as they come and well on his way to pass 20 Premier League goals for a sixth successive season.

The City star has been an elite striker for almost a decade. His standing among the best Premier League strikers ever will only be truly appreciated once he departs.

The development of Raheem Sterling under Pep Guardiola has been phenomenal.

The former Liverpool man will be met with a chorus of boos this weekend, but he presents perhaps the greatest threat to Klopp’s side, attacking from the left.

Sterling has posted numbers that rightly put him in the conversation with Kylian Mbappe and Mane as the best winger in the world.