Jose Mourinho vs Pep Guardiola: Who Is The Better Football Manager?

Jose and Pep will be remembered as two of the greatest football managers of all-time but who comes out on top? 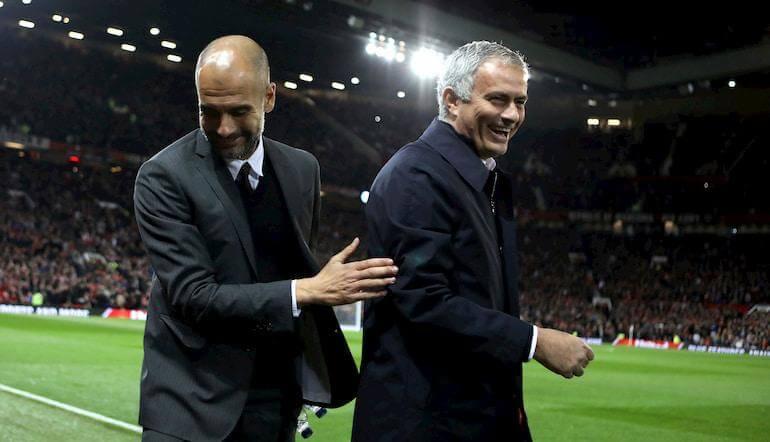 England vs Australia. Federer vs Nadal. Messi vs Ronaldo. Mourinho vs Guardiola. Four sporting rivalries, some friendly than others, between two very different parties.

The elegance of Roger Federer versus the physical freak of Rafael Nadal, the technical supremacy of Lionel Messi and the outrageous athleticism of Cristiano Ronaldo.

Although clearly the two best managers in the world for several years, Mourinho and Guardiola couldn’t have been much more different.

It’s Mourinho’s in-the-trenches mentality against the artwork of Guardiola, it’s win-at-all costs against a school of footballing philosophy.

For a period, the Mourinho vs Guardiola conversation was as divisive as anything in the sport. Picking one over the other said more than who you prefer, it was an indication of how you think football should be played.

A Mourinho and Guardiola matchup was an event itself, regardless of the teams and circumstances.

Their standing in the sport became so great, the managers were the headline act. Cameras spent as much time on the dugout as they did on the action.

Their relationship wasn’t as frayed as others in the managerial world.

It didn’t have the flashpoints of Mourinho and Arsene Wenger. It was more mind games than outright confrontation, Mourinho an expert in downplaying his chances. Money often became a part of it, too.

Financially they have both been backed as well as any manager in the history of the sport. Spending to bring in the players they want is a known requirement when you hire either manager.

High-profile mistakes and a plummeting reputation have seen Mourinho’s power wane in that regard, but in his peak years, appointing Mourinho was an acknowledgement of there being heavy spending to come.

His early days at Manchester City were hamstrung by a misshapen squad, particularly at full-back. It could be regarded as an inflexibility, though that is sometimes overplayed.

Mourinho has his own issues, and will always want to make significant changes to the playing staff when he arrives at a club.

Certain types of players are seldom deemed suitable by Mourinho - Juan Mata’s Chelsea departure might be the greatest example of this.

Using the total money spent by either manager as a tool to criticise is commonplace, but it is the nature of elite football. They might spend more than others, and they can likely be very demanding of their clubs, but they earned that right.

Success gives them leverage over their bosses, and spending on Guardiola and Mourinho is/was not as great a gamble as it is with others.

Give Guardiola the players and he brings tiki-taka and success. Give Mourinho the players he asks for and trophies followed immediately.

They have each enjoyed such glory, across England, Portugal, Germany, Italy and Spain, that their arrival at a club saw their football betting odds plummet. Comparing their list of trophies won is hardly a way to split them.

How can Guardiola’s Bayern titles be compared with Mourinho’s Porto success? Are two Champions Leagues at Barcelona worth less than one at Inter and one at Porto?

Mourinho has three Premier League titles to Guardiola’s two, but his spell at Manchester United and how his second Chelsea tenure ended should count against him.

On the European stage, Mourinho twice defied the odds, but never delivered at Chelsea or Real Madrid, while Guardiola’s tally of two is arguably disappointing considering his teams were so often among the favourites.

The desire to compare the two is natural. For a significant period, they were far clear of any other managers in the world.

With Mourinho’s spell at Porto, and even his first Chelsea stint to an extent, he has taken a different path to Guardiola. He thrived as an underdog.

The question in this comparison perhaps boils down to how much Mourinho’s Champions League title at Inter matters.

Guardiola’s failure to win a European trophy without Messi thus far is the only significant criticism that can be thrown at him, but the nature of knockout football makes it a relatively easy one to rebuke.

While Mourinho toured in his peak years, accumulating trophies, Guardiola has been more selective, taking on projects and overhauling two of Europe’s biggest clubs since leaving Barcelona.

When Guardiola leaves, teams are in a better state than when he arrived. The same cannot be said for Mourinho.

The best of Mourinho was a guarantee of silverware. He was an entertainer off the pitch, adored by the media, fan bases and players. The short-termism, the fractured relationships, were worth it in those days.

If being a successful football manager is all about results, Mourinho was unrivalled through the 2000s. He was the man you’d choose to win a one-off match.

The longer-term influence on an entire club, or even a league, matters, though. Guardiola is a descendant of Johan Cruyff, who changed the way the game is played, and Guardiola has achieved a similar feat.

Mourinho is a pure winner. Guardiola is a revolutionary.

They approached the role so differently. Once their careers are over, Guardiola will be remembered more fondly. Mourinho’s football might be forgotten, but his charisma in those Porto, Chelsea and Inter days will not be.