Lionel Messi vs Cristiano Ronaldo: Who Is The Best Player?

Are you Team Messi or Ronaldo? Two of the greatest players of all-time but who ranks as the best footballer ever? 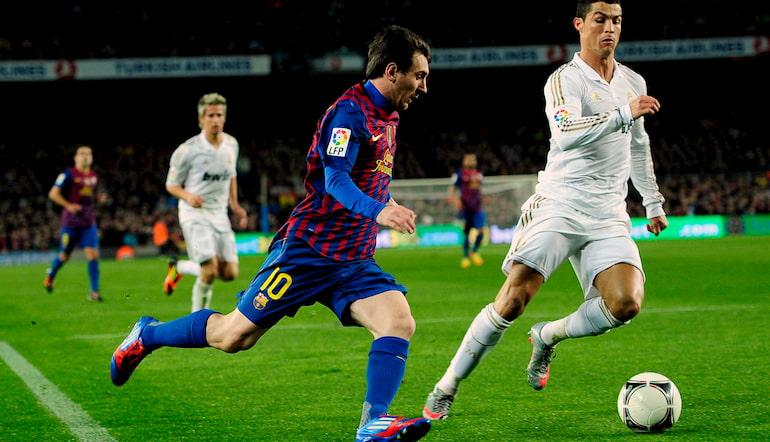 Lionel Messi and Cristiano Ronaldo have spent much of their careers pitted against one another, dominating conversation, collecting awards and crushing records on a yearly basis.

Both as individuals and parts of their teams, Ronaldo and Messi have dominated the top of men’s football over the last decade - with the two players tied for most Ballon 'Or wins.

According to our panel, it’s not even close!

From 2008 through to 2018, Messi and Ronaldo were the only winners of the Ballon d’Or, a streak that was ended by Ronaldo’s long-time Real Madrid accomplice and masterful midfielder Luka Modric.

The jostling for position between the two has been constant. The debate over which holds the upper hand at any moment has been ever-present.

Exaggerated by the Barcelona and Real Madrid rivalry, Messi and Ronaldo have become rivals in a bizarre, and possibly overplayed, way.

This isn’t about two players who call each other out frequently. There’s little from either of man about wanting to beat the other, it’s a case of those two going about their business while a manufactured ‘rivalry’ has brewed.

Fan bases love to compare and contrast, and each of Messi and Ronaldo have a core of loyal, partisan support.

Being a backer of Messi or Ronaldo in the ‘greatest player of all-time’ conversation is an identity, it is as meaningful for many as the team they support.

For the two players themselves, though, there isn’t an obvious desire to be considered better than the other. Messi betting prices are usually similar to Ronaldo odds on scoring in any given game.

They, for the most part at least, get on with their football, they shake hands when they face each other, and continue to accumulate accolades and goal scoring records.

Being the greatest ever in any sport, or even in a generation, is a significant and oft-asked question. It is a provoker of conversation, and something that will divide.

Messi and Ronaldo’s careers have caused this in a way like few others can.

There’s a stylistic clash between the two. While their roles in their respective teams are markedly different and always have been, their physiques, and even their personalities, are hardly similar.

Messi has a slight frame, his athleticism is a long way down the list of his skills. Ronaldo is like a cartoon athlete, unafraid to show off his superman-esque torso whenever given the chance.

In his peak years, he had Olympic-sprinter pace. He’s strong, and was the perfect back-page photograph with his extraordinary leaps.

Football fans are going to have preferences. Some will lean towards the undersized Messi, others will be in awe of Ronaldo as a pure athlete. Of course, plenty of people will be appreciative of both.

That’s the part of the argument that is impossible to settle. It’s a simple matter of taste in the same way that some people will prefer a player like Mesut Ozil to Fernandinho and vice-versa.

It’s the goals scored and trophies won, which is often where the Ronaldo-Messi conflicts will end. And the truth is, they’re impossibly hard to call. The Ronaldo vs Messi debate blazes on, whichever way you look at it.

Messi has out-assisted Ronaldo throughout his career (hardly surprising, of course, as he’s a far superior creative force). Everything can be qualified, and these aren’t exactly giving a conclusive answer on ‘greatness’.

Then there’s the favourite nugget for the pro-Ronaldo base. Ronaldo has done it in England, Spain and Italy. He enjoyed international success with Portugal at the last European Championships – something Messi missed out on once again at Copa America 2019.

How much attention to pay to those two things is tricky to judge. Is winning in different countries, when Ronaldo was on brilliant teams each time, really worth much?

Cristiano Ronaldo is the first player EVER to score 50+ goals in all three major leagues. ? pic.twitter.com/O9As6JlFUL

Does international success carry any weight at all, considering Argentina’s dysfunction has been out of Messi’s control?

The other challenge here is that, as was touched on earlier, this isn’t a direct comparison. Sure, they’re both forwards, but that’s really where the similarities end.

They both score a lot of goals, but they do it in different ways, and their skillsets are – particularly in recent years – very different.

Ronaldo has become more of a poacher. His size and use of his body makes him useful with his back to goal, and he’s a force aerially.

Popular names on the Ballon d'Or winners list, they are both prolific and continue to terrorise defences well into their thirties but they boast very different styles.

Messi is a greater technician and creator and could play as a deep-lying midfielder if required. Ronaldo couldn’t do that, but he can lead the line and feed off scraps in a way Messi can’t.

We've seen the best of Ronaldo and Messi but both players are showing no signs of stopping at the top level, and will feature in football betting news for years to come. Their status as two of the top five players of all-time is almost universally agreed.

Messi’s legacy, once both have retired, will ultimately be greater. He brings a different reaction from football watchers, a jaw-dropping ‘did he really just do that?’, in contrast to the impressive predictability of Ronaldo’s sustained goal scoring.

Messi’s magic captures fans in a way that Ronaldo doesn’t. The Argentinian will be considered the greatest to have ever played the game, ahead of Johan Cruyff, Pele, Diego Maradona and Ferenc Puskas.

Meanwhile, Ronaldo will have to settle for a spot inside the top five, and perhaps even top three.