Who Are The 10 Most Followed Female Soccer Players On Instagram

Instagram is popular with sports stars across the world – but who are the 10 most popular women football players on the social media platform? 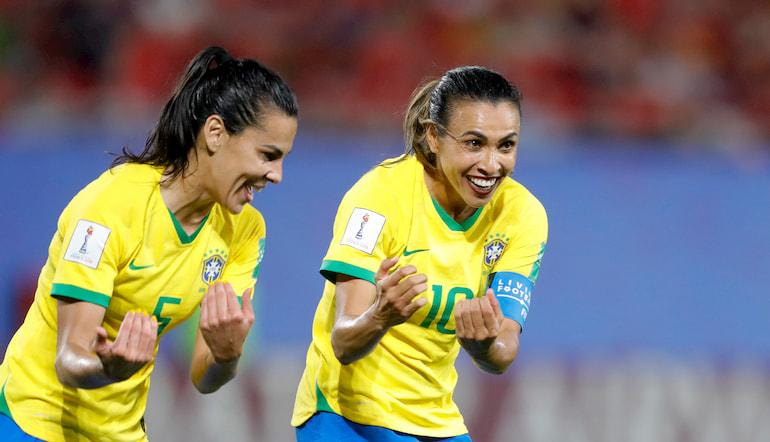 Women’s soccer has been on the rise for many years but it has seen a huge influx of fans in the last few years. With the 2019 Women’s World Cup broadcast around the world, football betting fans have enhanced their understanding of the women’s game.

Social media is a key reason for the increased interest. The likes of Carli Lloyd, Alex Morgan and Megan Rapinoe have used their social media presence to promote women’s soccer and female footballers are starting to see more recognition.

The United States women’s national team are the dominant force in soccer but the likes of Brazil and England are improving. In time, we could see the Lionesses competing for World Cup glory.

Without further ado, it is time to take a look at the most popular women’s soccer players on Instagram. Many of these stars play for the United States, and that is where we kick things off with goalkeeper Ashlyn Harris…

The only goalkeeper on this list, Harris has found herself in and out of the United States women’s squad since making her international debut in 2013.

However, Harris now looks set to take control of the number one jersey and she has seen a soar in popularity on Instagram in recent months.

With the legendary Hope Solo now retired, Harris has the difficult job of following in her footsteps but she has what it takes to succeed on the international stage.

At the time of writing, O’Hara is the ninth most popular female soccer player on Instagram, with a lofty 832,000 followers.

The United States star has racked up 131 caps for her country and she scored her first international goa in the semi-finals of the 2015 World Cup.

Sponsored by Under Armour, O’Hara is a household name in women’s soccer and she is now lighting up the National Women’s Soccer League for the Utah Royals.

Now 36 years old, Krieger has been there and done it all on the biggest stage – helping the United States to Women’s World Cup glory in 2015 and 2019.

Like many others on this list, she has made over 100 appearances for her country and she is widely regarded as one of the most consistent players in the game.

With 900,000 Instagram followers, Krieger is a popular women’s soccer player and she can be found posting frequently across her social media platforms.

Ertz has made over 100 appearances since breaking into the United States women’s team in 2013, helping the team to back-to-back Women’s World Cup triumphs.

Still just 28 years old, Ertz is already an established name in women’s soccer and she is a role model for aspiring female footballers around the world.

The American recently hit one million followers on Instagram and she will hope to celebrate by leading the Chicago Red Stars to NSWL glory in the coming months.

With 1.1 million followers on Instagram, Cristiane is one of two Brazilians to feature on this list of the most popular women’s soccer players on the platform.

The Brazil striker has scored 96 goals in 147 international appearances and she became the oldest player in Women’s World Cup history to score a hat-trick in 2019.

Like a fine wine, Cristiane seems to get better with age and it wouldn’t be a huge shock to see Cristiane thriving at the top level for years to come.

A true legend of women’s soccer, Lloyd has set various records throughout her illustrious career and in 2019 she became the first player to score in six successive Women’s World Cup matches.

Lloyd is only the fifth most followed women’s soccer player on Instagram but she tops the highest paid female footballers charts for 2020.

She isn’t the most active player on Instagram but Lloyd often sees plenty of interaction on her posts, particularly those advertising her sponsorship deals.

Martens has dropped one place in the social media rankings compared to last year but the Netherlands star still has a huge Instagram presence with 1.1 million followers.

The Barcelona winger was named FIFA Women’s Player of the Year back in 2017 after her influence in Holland’s success at the UEFA Women’s European Championship.

Now a household name in women’s soccer, Martens is widely regarded as one of the best female footballers on the planet and she is a major icon for Nike.

Rapinoe has been around for the best part of 15 years, making over 160 appearances for the United States women’s national team.

A key figure in their 2019 Women’s World Cup triumph, Rapinoe was the dominant force in the sport last year – winning the Ballon d’Or Feminin award for the first time.

Rapinoe is fairly active on Instagram and she uses her social media page to promote several sponsorship deals, including advertisements for Nike and Samsung.

Despite Rapinoe’s surge in the social media rankings, Marta is ‘best of the rest’ behind Alex Morgan when it comes to female soccer players on Instagram.

The first player – male or female – to score at five different FIFA World Cup tournaments, Marta will go down in history as one of the most important names in women’s soccer.

Popular with the masses on Instagram, Marta has 2.3 million followers and Brazil fans will miss watching her and Cristiane when they hang up their boots.

Morgan is one of the leading figures in women’s football and that is no different when it comes to her presence on Instagram.

With a lofty 9.2 million Instagram followers, Morgan is some way clear of her peers and she is an absolute must follow for any football fan.

Now playing for Tottenham Hotspur in the Women’s Super League, Morgan is excellent at marketing herself – she is the one female soccer player that everybody knows.