Premier League: Jurgen Klopp vs Chris Wilder - Who Is The Manager Of The Year?

These two bosses have been some way clear of the rest but who deserves the Premier League Manager of the Year award? 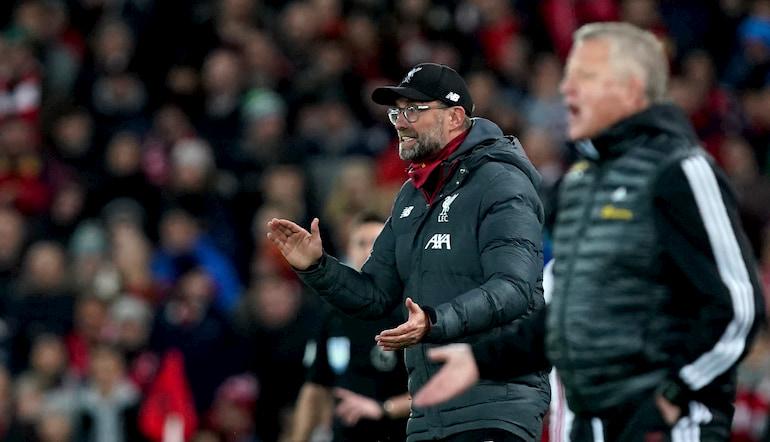 Jurgen Klopp and Chris Wilder are the only two contenders for Premier League Manager of the Year.

Klopp has Liverpool within touching distance of their first league title of the Premier League era, Wilder has guided Sheffield United into the midst of Champions League qualification battle.

It’s been months since PL betting on the title was relevant.

Liverpool are a couple of matches from a long-awaited coronation, but it has been a cruise after the neck-and-neck race with Manchester City last season (which ended with Pep Guardiola’s side making it two in two).

Sheffield United started the year superbly, but a legitimate push for a top six or seven spot always seemed unrealistic. Wilder has steered his team to a position where they are in with a very real shot with 10 matches to play.

Winning their game in hand would put them into fifth, likely good enough for a Champions League slot thanks to Manchester City’s ban from the competition.

The two managers have achieved historic things. It’s rare that Premier League Manager of the Season doesn’t go to the league winner (in the 2010s, only Alan Pardew and Tony Pulis won it without winning the league).

Wilder has done enough to, at the very least, force a debate on the topic. It shouldn’t be a foregone conclusion just yet.

In most other seasons, Wilder is likely following in the footsteps of Pardew and Pulis. There’s the narrative in Klopp’s favour – finally bringing the title to Liverpool – and there’s the more quantifiable fact: This Liverpool team is historically good.

They have dropped five points from 29 league matches, a record that borders on unfathomable.

City’s records set just a couple of seasons ago (most points, biggest margin to second, most wins) are all under threat. There’s been a blip of sorts in recent weeks, but Klopp’s team remained on a trajectory that elevated this beyond any other title.

The comparisons with Arsenal’s invincibles are deserved – Liverpool are set for a season that will dominate the record books.

It would be silly to pretend Liverpool haven’t spent substantially on their squad. That shouldn’t count against Klopp. Player development works in his favour.

Liverpool splashed on Alisson, Naby Keita and Virgin van Dijk. The front three weren’t exactly cheap. This Liverpool team dominates our combined northwest XI, though, and several of those selections are down to their progress under Klopp.

Not every manager turns Trent Alexander-Arnold and Andrew Robertson into elite full-backs. Plenty of managers wouldn’t make Sadio Mane into one of the best on the planet.

The process for Liverpool to reach this level, as much as their record-setting pace, is the core of Klopp’s case. Klopp hasn’t had to be the master of substitutions this year, he hasn’t had to navigate through deep tactical battles.

He has overseen a project to turn Liverpool from fringe Champions League side to one of the best in the world. It is a distinctly Klopp team.

Sheffield United could be heading for a top six finish. The last time they achieved that feat was 1974/75, when Derby County won Division One, with Ipswich Town finishing third and Stoke City fifth.

It feels ingenuine to qualify any Premier League budget as shoestring.

By top flight standards, though, that’s what Sheffield United have – their payroll is less than a twelfth of Manchester City’s and less than half of Wolves’, who have the third-smallest according to Spotrac.

The stock of many of United’s players has risen. No one at Bramall Lane has seen their reputation blossom quite like Wilder, however, who has shown himself not just to be a successful football manager, but a charismatic, grounded man too.

Wilder has been swimming against a tide of footballing prejudice. His team were – in some high profile places – labelled as a negative, long-ball side because they have a British manager and a small budget.

Far from that, Wilder’s side are expansive, and inventive. The overlapping centre-backs are more Guardiola than Allardyce.

The case for Wilder is robust. Sure, he has benefited from weak seasons from some wealthier clubs, taking full advantage of the circumstances.

There are other, more established Premier League teams that missed the opportunity. As it stands, Sheffield United are not only ahead of the two north London clubs, they’re also well clear of big-spending duo Everton and West Ham.

The Blades might the best non-Leicester underdog story in Premier League history. The prospect of Champions League nights at Bramall Lane is something for all neutrals to get excited about.

It might be months before we know how this Premier League season ends.

If the campaign finishes as it stands, Klopp will take Manager of the Year, but Sheffield United are in touching distance of a Champions League spot, which would change the situation markedly.

Wilder taking the Blades to Europe’s elite competition, with a helping hand from Manchester City, would be one of the greatest achievements in Premier League history. Sheffield United were relegation candidates in August.

For all the justified plaudits Wilder receives, he might be fighting a losing battle against the admiration for Klopp and this Liverpool team.

They are two likeable people, they are two managers who play football that the neutral tends to enjoy. It will be a topic that divides opinion (as everything in football seems to), but there’s no right answer for this season’s Manager of the Year.

Wilder and Klopp share the award in an ideal world. The most likely outcome, though, is Klopp adds another trophy to his collection and a significant sector of Premier League fans are frustrated that Wilder gets overlooked.