Our football expert selects his North West clubs combined XI - scroll down to check out his few interesting picks... 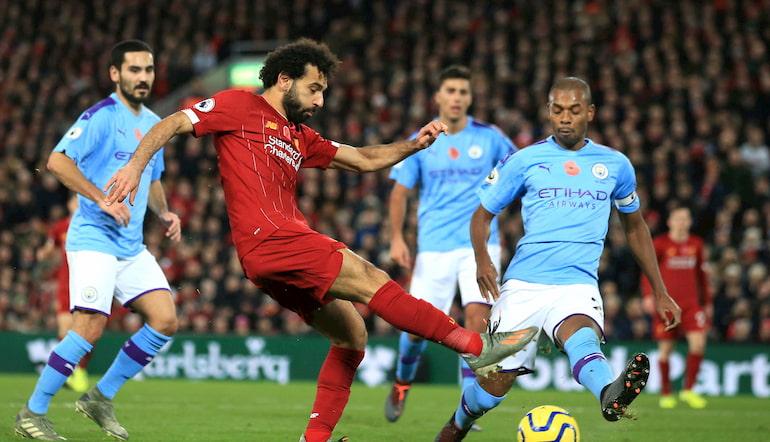 We’ve already put together a combined London XI, now it’s the turn of England’s northwest clubs. The Merseyside giants and the two Manchester clubs have combined for 53 league titles and that’s going to become 54 in a few months’ time.

The balance of power has shifted in Manchester. There’s been change in Liverpool, too. Liverpool are dominant once again, a far cry from the team that languished in mid-table for several seasons.

Everton have had major investment, though they remain the outsider of the northwest quartet, still looking to force their way into regular European contention.

Here we are then, a northwest clubs combined XI, set up in a very attacking 4-3-3…

Alisson is the best goalkeeper in the Premier League, and there’s a case to be made that numbers two and three are Ederson and David De Gea.

The Brazilian gets the nod here, despite a couple of errors this season. His impact on the Liverpool defence cannot be overstated after seasons of goalkeeper chaos.

There’s not much debate to be had with this one. Trent Alexander-Arnold is the best all-round full-back in the world right now.

His struggles defensively are often overplayed. At the other end of the pitch, he is as effective as any full-back in recent memory.

Alexander-Arnold didn’t have much competition from his England teammates Kyle Walker and Aaron Wan-Bissaka.

Like Alexander-Arnold and Alisson, van Dijk is the best in football at his position, which makes him a shoo-in to start in this northwest XI.

Van Dijk, like Alisson, changed this Liverpool team. The heart of defence had been a problem for years, and within days of the signing being confirmed, there was a renewed sense of calm.

Liverpool and Manchester City are hardly comparable this season. That could have been so very different if Aymeric Laporte hadn’t suffered a long-term injury earlier in the campaign.

Laporte arrived for a substantial fee a couple of years ago. The Frenchman hasn’t received the same plaudits as Van Dijk, but perhaps he should do after we’ve seen how Manchester City defend without him.

Left-back was Everton’s best chance of a selection in the back five. Lucas Digne is great, but there’s no stopping Andy Robertson from joining Van Dijk, Alexander-Arnold and Alisson here.

Robertson is one of the best examples of Liverpool’s excellent recruitment. A bargain from Hull, he’s grown to be considered among the very best left-backs on the planet.

Sitting in front of the back four in this fantasy XI, Fabinho was another straightforward choice. Fernandinho has been more centre-back than midfielder this season, and Scott McTominay isn’t at the same level.

Fabinho provides everything a team needs from that spot. He reads the game superbly and moves the ball quickly.

Injured for much of this campaign, Paul Pogba is Manchester United’s lone representation in this side. The Frenchman is a divisive figure, but his quality shouldn’t be forgotten amid Mino Raiola’s outbursts.

Even with Liverpool cruising to the title and possibly an unbeaten season, Kevin De Bruyne deserves serious consideration for PFA Player of the Year. The Belgian is on course to break the Premier League assist record.

Superlatives have been exhausted for De Bruyne. Manchester City will be concerned he will fancy a move abroad if their Champions League ban sticks.

Some players seem like a nuisance to play against. Sadio Mane certainly falls into that bracket, and not in a Diego Costa way. He’s electric and energetic from the first whistle to the last.

Mane’s movement off the ball, whether pressing or looking for a pass, is intelligent, and he’s out-thought many an opponent.

Once underrated, the former Southampton forward is finally recognised as one of the best in the world.

Anthony Martial and Marcus Rashford have been great this season. Dominic Calvert-Lewin is in wonderful form. Roberto Firmino is excellent. None can stop Sergio Aguero from leading the line here.

The Argentine has the best goals per game ratio in Premier League history, and despite a dearth of individual awards, he has been as consistent as anyone in the English football over the last decade.

It’s been a rough few weeks for Raheem Sterling, and it was a toss up between the England winger and Mo Salah for the third forward spot.

Sterling is nowhere near if we were picking on form. This is a broader selection, though, and his performances over the last couple of seasons just about earn him the place.