Ranking The 10 Best Goalkeepers In The Premier League

Our football expert picks his top 10 Premier League goalkeepers – do you agree with his picks? 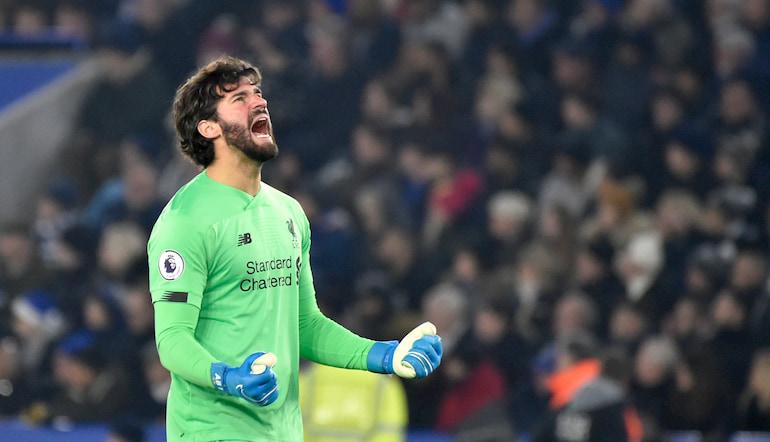 Most football fans would agree that the goalkeeper position is the toughest role in football.

Under scrutiny from kick-off to the final whistle, Premier League goalkeepers need to stay focused – making a mistake simply isn’t an option.

Some keepers will be tested more than others. However, one of the main signs of a world class goalkeeper is that they are reliable and ready for action at any given moment.

Our 888sport tipster has looked at 10 of the best goalkeepers in the Premier League – do you agree with his picks?

Some excellent goalkeepers were unlucky to miss out on this list – and it wouldn’t be a huge shock to see major changes in the next year or so.

Burnley goalkeeper Nick Pope has been sensational this season but just falls short while Arsenal’s Bernd Leno is the most high-profile name to miss out.

Without further ado, let’s get down to the reasoning for the rankings. Keep an eye out for all 10 players in online betting odds for Team of the Year…

Pickford has his critics but he still features in our list of the 10 best goalkeepers in the top flight. The England number one will need to improve before Euro 2020 in order to repel Dean Henderson and Nick Pope but he is capable of doing just that.

However, he has virtually no pressure on his spot at club level and Everton supporters have claimed that Pickford is getting complacent. If the Toffees sign another top goalkeeper this summer, Pickford will have to raise his game.

On his day, Pickford is capable of finding his best form on the big stage but consistency is his weakness – there is certainly room for improvement.

At 32 years old, Patricio is very experienced and the Wolves goalkeeper has been a huge hit since moving to Molineux in 2018. The Portugal shot stopper has been central to their rise up the table and he is under contract at the club until 2022.

Patricio has made 85 saves so far this season, stopping two penalties while also recording an impressive 11 clean sheets. The Wolves keeper has made just two errors leading to goals in 2019/20 and he is among the most consistent goalies in the Premier League.

Wolves are challenging in top four betting odds and Patricio’s impact between the posts could be the difference between Champions League qualification and just missing out.

You could make a case that Kepa should be lower on this list but that would be harsh in our view. While consistency continues to elude him, the Spain international has pulled off a top drawer save to preserve a lead on more than one occasion this season.

His hefty price tag brought lots of expectation and it has been a bit of a mixed bag for Kepa at Stamford Bridge. Frank Lampard has faced calls to drop the Spaniard at times this year but the Chelsea manager has kept faith in their £71 million shot stopper.

Kepa’s upside is a main factor for his inclusion in these rankings. Chelsea fans may need to play the long game with him to fully reap the rewards from his skillset.

Lloris should feature on every top 10 Premier League goalkeepers list – the Tottenham man has been a popular pick for fantasy football players since moving to England’s top flight. But this season, Lloris has dropped in the rankings after a hit and miss campaign.

To be fair to Lloris, he has been one of Tottenham’s better players since the Premier League returned but that isn’t much of a compliment. However, he has made a number of key saves in recent weeks to keep Spurs in the Premier League top four race.

You can question Lloris’ rash decision making at times but he remains a competent shot stopper. Is his time at Tottenham running out? Only time will tell…

Dubravka has really impressed since joining Newcastle United in 2018 and he has now established himself as an elite Premier League goalkeeper. Statistically, the Magpies shot stopper is one of the busiest keepers in England’s top flight – make of that what you will.

With 10 clean sheets in 34 appearances this season, Dubravka has a solid record. However, you have to take the club he plays for account. If the Slovakia star played for a top six side, he would be vying for the Golden Glove in football betting odds.

Newcastle are looking to build for the future and at 31 years old, Dubravka could be sticking around for some time. Without a doubt, he is one of the league’s most reliable goalkeepers.

It would be fair to say that Kasper has lived up to the Schmeichel name though he has yet to hit the lofty heights of his father. Having said that, the Denmark star was key to Leicester City’s memorable Premier League title success in 2015/16.

Schmeichel has been linked with England’s top clubs but he seems happy at Leicester for the time being. However, it wouldn’t be a huge shock to see clubs come knocking in the transfer window and a big money move could tempt him to part ways with the Foxes.

On current form, Schmeichel just about scrapes into our top five – though his place may be in danger with the likes of Dubravka and Pope improving at a rapid rate of knots.

The Spain international has failed to inspire confidence this season but talks of his demise have been exaggerated. De Gea set the bar incredibly high prior to the 2018/19 campaign but, while he is no longer operating at that level, he is still a top goalkeeper.

With Manchester United thriving going forward, the Red Devils are likely to be a popular pick in Premier League outright winner odds for next season. Ole Gunnar Solskjaer’s side cannot afford any slipups though so De Gea will need to be on top form.

De Gea’s form has dipped but he is still worthy of a top four spot on this list. He will need to get back to his brilliant best to fend off Henderson next season though.

Sheffield United are going to miss Henderson when he’s gone. Currently on loan at Bramall Lane from Manchester United, the 23-year-old looks destined for greatness at Old Trafford and could claim the number one shirt from David de Gea in the coming years.

The Blades have exceeded expectations this season, challenging for Europe despite a lack of spending power and top flight experience. Henderson has been one of the standout players in the Sheffield United squad and Gareth Southgate will have been watching him closely...

While he’s not quite the finished article just yet, Henderson has a bright future ahead of him and we could see him taking centre stage at Old Trafford and for England.

Ederson is your stereotypical Pep Guardiola goalkeeper. With excellent footwork and an intelligent understanding of the game, the Brazilian is clear with compatriot Alisson as the top two goalkeepers in English football.

The City shot stopper went through a rocky patch earlier in the campaign but it would be unfair to focus too much on that as the entire Manchester City squad struggled to inspire confidence. When called upon, Ederson usually steps up to the plate.

He is arguably the most skilful goalkeeper ever to grace the Premier League and could pass as an outfield player. And at just 26 years old, Ederson certainly has time on his side…

At the time of writing, Alisson has conceded 16 goals in 25 league appearances in 2019/20. Meanwhile, he has kept 13 clean sheets – second to Nick Pope although the Brazilian has played nine less games than the England goalkeeper.

Liverpool are prominent in the Premier League Odds outright markets and Alisson’s form will be key to their chances of retaining the title next season.