Our football betting expert looks at the 10 greatest Europa League finals of all-time... 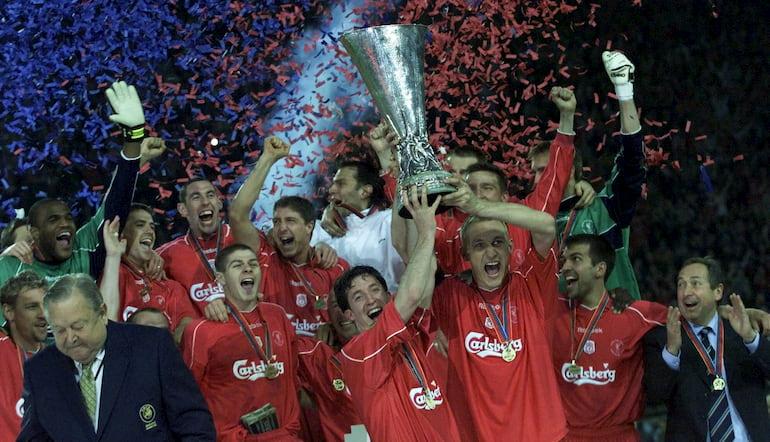 The Europa League final has changed over the years. Up until the late 1990s, it was a two-legged affair and the competition, of course, has experienced an overhaul from the UEFA Cup to the Europa League.

Europa League betting is heating up as this year’s final rounds get underway. Two English clubs are still in with a shot of winning it and following in the footsteps of the victors in our list of the 10 greatest Europa League finals.

Travelling through the decades, from extra time crackers to last-minute winners, these are the top Europa League (and UEFA Cup) finals…

Dortmund’s Westfalenstadion hosted the 2001 UEFA Cup final. It was Liverpool’s third final appearance in the competition. They faced a Deportivo Alaves side without the same pedigree, but who had seen off Inter Milan earlier in the competition.

Liverpool were pursuing a treble after lifting the League and FA Cups. When Markus Babbel and Steven Gerrard put them two up inside 17 minutes, it looked like a comfortable evening in Germany for Gerard Houllier’s side. That quickly changed.

Alaves scored in the 26th minute, and even though Gary McCallister converted a penalty before half-time, the game was far from settled.

Javi Moreno tied it up with a quick brace. Robbie Fowler put Liverpool ahead in the 70th, before a dramatic Jordi Cruyff equaliser late on.

Alaves had two players sent off in extra time before a golden own goal handed Liverpool their third trophy of the season.

Sevilla faced a difficult path to the Europa League final in 2014-15. They made their way through the knockout rounds to meet Dnipro in the final, who had eliminated both Ajax and Napoli already in the competition.

Goals flew in, with Nikola Kalinic giving the Europa League tips underdogs an early lead. A goal from Ruslan Rotan on the stroke of half-time made it 2-2 at the break, and Sevilla took charge in the second half.

Carlos Bacca scored his second of the match in the 73rd minute to secure yet another Europa League triumph for the Andalusian side.

Around 80,000 Celtic fans travelled to Seville for the 2003 UEFA Cup final. No Portuguese or Scottish team had won the tournament before this match, and it was Jose Mourinho’s Porto who came out on top.

Derlei scored in first half added time, triggering a thrilling few minutes at the start of the second half. It was nil-nil in the 44th minute and 2-2 by the 58th.

Derlei was the eventual difference maker, netting in the 115th minute to win Porto’s first European trophy since 1987.

The San Paolo was bouncing for the first leg. Football betting tips expected Diego Maradona’s Napoli to get the better of Stuttgart.

The visitors took the lead in the first half, and the Serie A club had to wait until the final quarter of the match to get back into it, a Maradona penalty and a late goal from Careca secured a 2-1 win.

The second leg was a cracker. Alemao gave Napoli the lead, but Jurgen Klinsmann soon equalised.

Napoli took charge, making it 2-1 before the interval, and Careca put them 3-1 up, but Stuttgart made a late push, scoring twice in the last 20 minutes.

Unfortunately for the Bundesliga club, it wasn’t enough and Napoli ran out 5-4 winners on aggregate.

All four of the 1979-1980 UEFA Cup semi-finalists were German clubs. Eintracht Frankfurt and Borussia Monchengladbach overcame their Bundesliga rivals in the last four to book their places in the final.

The tie started at Bokelbergstadion in front of 25,000, and a late goal from Gladbach skipper Christian Kulik saw the hosts claim a 3-2 victory. Switching to Frankfurt for the second leg, the tie became cagier.

A late goal from Fred Schaub put Frankfurt ahead. The majority of the 59,000 fans were crossing their fingers for the final 10 minutes as Friedel Rausch’s side held on to win the competition on away goals.

It was a momentous occasion when Ipswich and AZ Alkmaar met in the 1981 UEFA Cup final. Both were appearing in their first European final, having seen off Koln and FC Sochaux respectively in the semis.

The tie began at Portman Road. Ipswich were a wounded squad, players carrying injuries and running through pain to get on the pitch for the final.

Their grit paid off with a 3-0 victory in front of their home crowd – most European football expert picks would have thought the tie was over.

When Ipswich took the lead four minutes into the second leg they looked comfortable.

That changed when AZ were 2-1 up 20 minutes later. It was 3-2 by half-time, and Jos Jonker’s 73rd minute goal made it an uncomfortable finish for Ipswich.

There was narrative aplenty. It was Eden Hazard’s last match for the club, Olivier Giroud matched up with his former team, Unai Emery had a proud Europa League record to preserve, Arsenal could qualify for the Champions League.

After a so-so first half, Chelsea ran riot. There was no final magic for a dysfunctional Arsenal, and Maurizio Sarri finally got his hands on a trophy.

Fulham’s route to the 2010 final, and the win over Juventus in particular, was spectacular. No online football betting gave them a hope of going so far.

Unfortunately, fatigue got the better of them, and Aguero and Forlan linked up for a winner in the 116th minute.

There were three Spanish sides in the last four in 2007. Sevilla saw off Osasuna, while Espanyol got the better of Werder Bremen. The two met up in Glasgow for the final.

After first half goals from Albert Riera and Adriano, the sides were inseparable. Extra time beckoned, but even then, they could not be split after goals from Jonatas and Frederic Kanoute.

Sevilla won the competition for the second time in two seasons thanks to a 3-1 penalty shootout victory.

Chelsea became the first team ever to hold the Europa League and Champions League simultaneously in 2013. Their defence of the big one had gone badly, seeing them knocked into the Europa League in the group stage.

The final was uneventful for the first 45. It came alive in the second half. Fernando Torres hustled his way to score the opener on the hour, before a Cesar Azpilicueta handball allowed Oscar Cardozo to equalise from the spot.

With the match seemingly heading for extra time, Chelsea had a corner.

Like in Munich 12 months before, Mata swung it in. Branislav Ivanovic leapt highest at the back post and his looping header into the far corner won it for Chelsea in added time.