Is Lewis Hamilton The Greatest Formula One Driver Of All-Time?

Lewis Hamilton ranks as one of the best Formula One drivers of all-time but is he worthy of the number one slot? 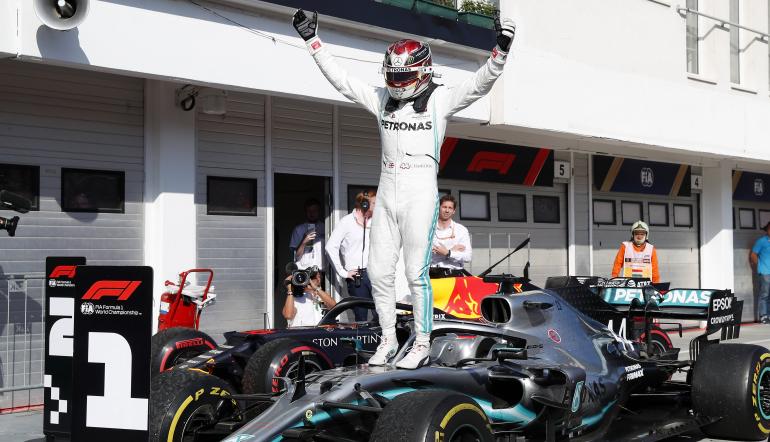 We witnessed one of Lewis Hamilton’s best wins before Formula One’s summer break as Hamilton chased down Max Verstappen to snatch race victory with just a few laps to spare in Hungary.

Hamilton already has five World Championships under his belt, and with nine races remaining in the 2019 Formula One season, he is well on his way to making that six.

That sixth world title – and Hamilton’s third in a row – will put him in lone possession of second place on the all-time list.

Currently tied with the great Juan Manuel Fangio, by the end of this campaign only Michael Schumacher will have won as many Drivers’ Championships as the Brit.

The counting of titles is an easy way to begin the conversation about greatest ever. It works better in individual sports than it does with teams, but it obviously still has its flaws.

Titles are dependent on your car, the rest of the field and a fair bit of fortune. Unfortunately, some of the most talented drivers to get behind a wheel saw accidents either end or seriously damage their careers.

With Mercedes’ superiority at the moment, however, it’s hard to envisage Hamilton failing to match the brilliant German unless he shocks the racing world and calls time on his career.

The move to Mercedes was a gamble for Hamilton. Having grown up at McLaren, having spent six Formula One seasons with them, having become the youngest ever world champion with them, he took a leap after the 2012 campaign.

While Mercedes had the riches to become a competitive team, they weren’t when Hamilton joined. His first season saw him finish fourth in the Drivers’ Championship, just as he had in his final campaign with Mercedes.

Now five seasons removed from his first and only world title, Hamilton’s career was at a crossroads. Still arguably the fastest driver on the grid, and an undoubted talent, the Brit had a breakthrough in 2014.

Winning the 2014 title, as McLaren faded into mediocrity, was a justification of Hamilton’s move. Another crown followed in 2015. An immense duel with Nico Rosberg saw Hamilton miss out in 2016, but he’s succeeded that with titles in 2017 and 2018.

It’s a spell of dominance that is Schumacher-esque, it’s lasted longer than Sebastian Vettel’s Red Bull supremacy, and Hamilton continues to be the man to beat.

Away from the team, though, witnessing Hamilton’s development as a driver has been captivating. Barely into his twenties when he first took to a Formula One grid, he was fiery and often trod the line between aggressive racing and recklessness.

That desire for wheel-to-wheel combat made Hamilton thrilling. More often than not, the move worked out, earning him regular spots on the post-race highlights.

On occasion, it didn’t fall Hamilton’s way, costing him points. When the McLaren wasn’t the fastest car on the grid, maybe Hamilton needed to push it that extra inch or two and walk the tightrope, or maybe it was just the optimism of an inexperienced driver.

In recent years, Hamilton has mellowed into a calculating, calmer presence behind the wheel. His hot-headedness is mainly directed at his race engineer.

There’s an obvious argument that it’s easier to be calm when your car is the fastest on the grid and you spend much of your time way out in front.

There’s an element of that, for sure, but there’s also a surgical efficiency to Hamilton over the last few seasons.

Much like Schumacher, errors are almost unheard of, and there’s an inevitability about victory once he takes a lead (the recent crazy race at Hockenheim is one of few exceptions).

New challengers Charles Leclerc and Max Verstappen have tested Hamilton’s raw pace in 2019. Hamilton, for the most part, has been up to the challenge, as he extends his lead atop the ‘most pole positions ever’ leaderboard.

Hamilton has tallied 87 poles in 241 races, a mammoth 19 more than Schumacher despite Schumacher having over 60 more races.

The electric pace we saw in his McLaren years is still there, even if his driving style has altered over the last decade. He will be the 2020 Formula 1 betting favourite, just as he has been for the last few years.

His rivalries with Rosberg, Vettel, Fernando Alonso and now Verstappen have treated the Formula One world to some magnificent racing. A master of wet weather conditions, and a sensational qualifier, Hamilton excels in every way as a racer.

Since a record-breaking rookie year, Hamilton has been widely considered the best driver on the grid.

Leclerc, Verstappen and several other youngsters are chasing the Brit for that crown right now, but it’s an almighty ask. Even in the years of Vettel’s dominance, Hamilton was extracting pace from the car that others would have been unable too.

His lifestyle might not be for everybody. Mercedes’ superiority and consistency will see some question Hamilton’s individual brilliance. Every iconic sportsperson has their detractors, and Hamilton has more than his fair share.

He’s an underappreciated master of his craft. A few years ago, David Coulthard called Hamilton "the Ayrton Senna of his era" and he is still raising eyebrows and surprising Formula One fans now.

The collection of race victories and the mounting records have made that the worst-case scenario for Hamilton now, which quite a situation considering his challenging seasons between 2009 and 2013.

Hamilton belongs alongside his hero Senna, Schumacher and Fangio as one of the greatest ever Formula One drivers.

The remainder of his career will give a clearer indication of where he sits at that table – there’s every chance he’s the undisputed best in Formula One history by the time he retires.

Formula One
Lewis Hamilton
About the Author
By
Sam Cox