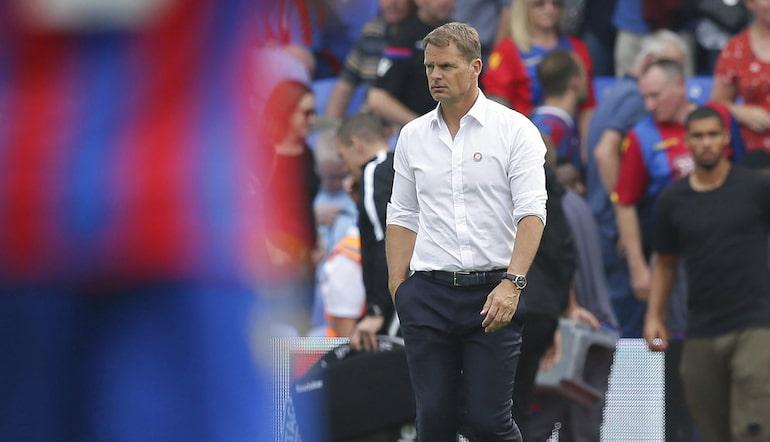 There are some strong candidates for the worst manager in Premier League history. Despite winning the Eredivisie four times with Ajax and enjoying success with Atlanta United, Frank De Boer is clearly in the mix.

The Dutchman might have had a decorated playing career, but that didn’t translate to his abysmal spell in charge of Crystal Palace.

De Boer lost all four of his Premier League matches without his team scoring a goal. His lone win came against Ipswich Town in the League Cup.

Sacked 10 weeks after being hired by the Eagles, De Boer was replaced by Roy Hodgson, who had an immediate impact on the London club.

De Boer hasn’t managed a European club side since, following his short-lived Palace tenure with a spell in charge of Atlanta United and a disappointing Euro 2020 campaign with the Netherlands.

In all likelihood, De Boer’s foray into Premier League odds at Selhurst Park was his first and last.

There would be considerable backlash if a club brought De Boer back to England, despite his achievements elsewhere and his Palace team actually performing solidly by expected goals in his four matches.

The public perception of De Boer’s stint was not good. He was overly ambitious from a tactical perspective, shoehorning players into roles they were not familiar with.

At times, managers can be given a longer leash because of injuries or bad luck.

De Boer’s attempt to revolutionise Palace had a different impact – people were baffled by what he was trying, and their shortening football odds for relegation were blamed solely on him.

Palace were the first topflight team to lose their first four matches to nil since 1924. De Boer, though, still felt he deserved more time and that things would have worked out eventually.

"They do some promises and they have a philosophy: ‘OK, we want to be a solid club.’ For example, Crystal Palace, you have to also play like a modern team and don’t play relegation football.

🗣"If Marcus was coached by Frank he would learn how to lose, because he lost every game"

When Jose Mourinho called Frank de Boer the worst manager in the history of the Premier League 🤣 pic.twitter.com/GvC127IikR

"If you want to do that, OK, one year you can survive, maybe two years. But one time you will go down, I am convinced.

"So they wanted to change that, like Southampton was doing in that period. I saw that picture in front of me, so I had the feeling that I had time, but when the season started, you already see some signs that this is not the way…

"I’m convinced. I think if we get the time we should, we definitely turn it around, especially at Crystal Palace.

"We had a feeling, in training you saw it, that this is the moment we’re going to go looking up and win games. And then they decided to sack me. Of course that’s not the nicest feeling, but it’s like that."

To use a popular cliché, football is a results business, and for all his confidence that their Premier League prediction fate would improve, De Boer was not delivering.

Hodgson ultimately led the Eagles to 11th, 11 points clear of the drop. Palace beat Chelsea and drew with Manchester City under Hodgson, proving this squad was a long way from the relegation fodder it seemed to be under De Boer.

By record alone, De Boer is the worst Premier League manager ever. Bizarrely, the short-lived nature of his time in English football makes it difficult to really give him that status.

Would Palace have slipped into Championship predictions if De Boer had stayed even a few weeks longer? Would he have brought the more entertaining football the board wanted and pulled them into mid-table? These are questions we never got an answer for.