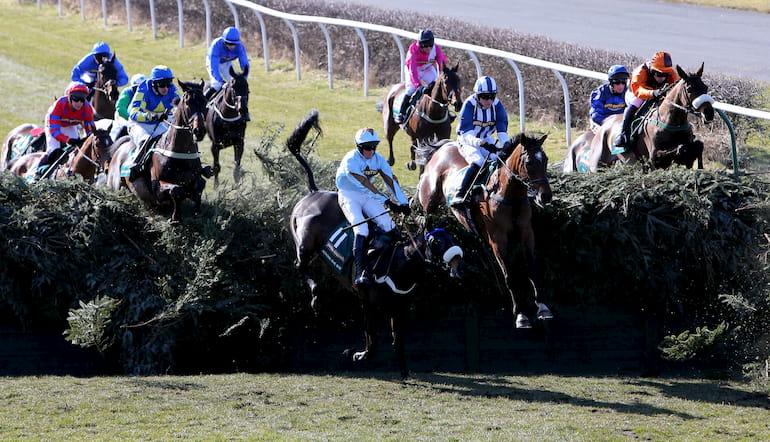 The Grand National is one of the biggest horse racing events of the season. Punters can find horse racing odds on the Aintree race months in advance and it is a must watch for racing fans around the world.

First held in 1839, the Grand National is widely regarded as the most valuable jumps race in Europe – with an estimated £1 million in prize money on offer.

The Aintree spectacle is iconic in British culture, with many non-horse racing fans tuning in to watch the Grand National every April.

There are 16 fences on the Grand National course, with Aintree obtaining the spruce from the Lake District.

Now made of a flexible plastic material, the fences were rebuilt in 2012 to improve safety compared to traditional wooden fences.

Every fence is jumped at least once but the Chair and the Water Jump are avoided on the final circuit – with runners bearing right for the run to the finishing line.

Different fences bring different challenges, both for runners and riders. Here, we take a look at some of the most well known Grand National fences at Aintree…

If you are a passionate horse racing fan, the chances are you will already know many of the Grand National fences.

But for the horse racing novice, we’re going to talk you through some of the most famous fences at Aintree racecourse.

Soon enough, you’ll be able to name all of the Aintree fences in any Grand National quiz! So, let’s get down to the five most famous Grand National obstacles…

Arguably the most famous Grand National fence on the circuit, Becher’s is a popular vantage point with spectators – with a chance for a horse to show off an exuberant leap.

Inexperienced jockeys can get Becher’s Brook wrong, with the steep landing side catching many riders by surprise – some of the best jockeys of all time have been caught out by this unforgiving Grand National fence.

The fence is named after Captain Martin Becher, who fell at the obstacle in the inaugural Grand National.

The story of Foinavon fence is legendary. It is named after the 1967 Grand National winner, who avoided a melee at the fence to go on and win the race at 100/1.

The fence itself is one of the smallest on the Aintree circuit, making Foinavon’s incredible triumph all the more sensational.

You’d get good Grand National odds on a similar incident occurring in 2021 – fingers crossed all 40 runners and riders make it over Foinavon safely!

Notoriously tricky, the Canal Turn has a sharp 90-degree turn immediately after landing. Get this Grand National fence wrong and your chance of victory could be over!

Those watching on television can see just how tight the Canal Turn is, though the layout of the fence has changed somewhat over the years – there used to be a ditch prior to this fence many years ago.

If your horse is still in contention approaching the Canal Turn on the second circuit, you’ll be fairly happy.

Initially known as the Second Brook, this famous Grand National fence was named after the 1840 race.

According to stories, Valentine jumped the obstacle with his hind legs first – which would have been quite incredible to watch, particularly over the Grand National fences.

A grandstand was built next to Valentine’s in the early part of the 20th century but it wasn’t the best viewing spot on the Aintree circuit and it was eventually torn down following the Second World War.

The only Grand National fence to claim a human life in the race, The Chair is one of the most imposing fences at Aintree racecourse.

With the ground six inches higher on the landing side, The Chair is the polar opposite fence to Becher’s Brook – though it is equally as testing for that reason.

Saint Xavier was a famous faller at The Chair in the 2020 Virtual Grand National – following in the footsteps of many legendary horses falling at this obstacle in real life.

Who will successfully navigate the Grand National fences and win the 2021 renewal? Only time will tell!