Who is the greatest striker in Arsenal's illustrious history? We ranked the 10 best forwards to ever play for the Gunners... 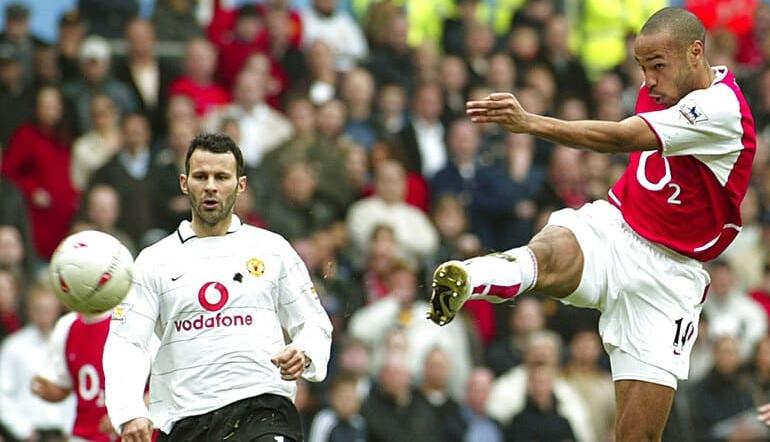 Being the third most successful club in English football it naturally follows that Arsenal have given us some of the deadliest and best forwards around down the decades, forwards that struck fear in goalkeepers and lit up Highbury then later the Emirates Stadium.

To pick out the greatest of all time we used the only currency they used – goals.

David Bone Nightingale Jack – yes, really – was a lethal inside-forward who was the first player to score at Wembley, a second-minute strike for Bolton in the 1923 FA Cup final.

He was also the first footballer to be transferred for a figure above £10,000, switching from the Trotters to Herbert Chapman’s all-conquering Arsenal, for a fee that almost doubled the previous record.

These impressive feats however paled to his main forte, that of scoring goals on a regular basis. Jack boasted a better than one-in-two strike-rate throughout his time in North London so it surprises that he only won nine England caps.

For several seasons leading up to the outbreak of World War II, the Gunners’ front three consisted of Alex James, Cliff Bastin, and a flying right winger by the name of Joe Hulme.

Arsenal won three league titles in this period along with a brace of FA Cups. These two truths are not unconnected.

As well as terrorising defenders in very large shorts, Hulme turned out for Middlesex County Cricket club most summers, making over 8000 runs and taking 89 wickets.

This man of many talents then turned his hand to journalism after hanging up his boots and pads.

Van the Man would be loved and hated in equal moderation by the live betting community these days, being a forward who so often turned a game on its head with a single moment of magic.

Joining from Feyenoord in 2004 for a bargain £2.75m, the Rotterdam-born talent was a thoroughly modern attacker blessed with as much technical ability as predatory instincts.

Rarely did he tap home from close range with every finish instead laced with a certain panache.

If it usually follows that such a player finds himself in the running each year for Goal of the Season but never the Golden Boot, Van Persie was the exception to this axiom, bagging a remarkable 30 goals in his farewell campaign for the Gunners.

The manner in which he left the capital for Manchester United in 2012 perhaps tainted his legacy but what a legacy it was, all the same.

Aside from football historians not many are overly familiar with the feats of the Brummie inside-forward, though his record of 137 goals in 244 compares favourably to the greats.

His goals ensured that the Gunners lifted a seventh league title in 1952 and for this alone he deserves an ever-lasting place in the club’s pantheon.

That and he scored considerably more goals than Dennis Bergkamp, Alan Smith or Joe Baker, who all miss out on our top ten.

One of the original superstars of the game, Drake was the embodiment of a big and powerful English centre-forward who once blasted seven past Aston Villa, an English record that is unlikely to ever be surpassed.

In that same game, the former gas-mater reader headed an effort against the bar and saw the ball bounce down over the line. On informing the referee of this when it was wrongly disallowed, he was told not to be ‘greedy’.

But he was greedy, in the best possible sense, firing 42 goals in 41 matches during his zenith season for the Gunners in 1935, a tally that included an incredible quartet of four-goal hauls.

Two decades later, Drake led Chelsea to a league crown thus becoming the first person to win titles as both a player and manager.

Not many have dared move directly from Arsenal to Tottenham or vice versa.

In 1931, the Bristol-born centre-forward did precisely this, ending a long and successful association with the Gunners that brought the club a league title a year earlier.

Brain wasn’t especially tall for his position, nor quick, but he possessed a sixth sense for finding the back of the net, an innate ability that would have made him a firm betting favourite today.

A goal every 150 minutes across eight campaigns in North London is testimony to that.

An integral part of Arsenal’s famed double-winning side of 1971, Radford came through the club ranks, immediately making his mark on reaching the first-team by notching a hat-trick aged just 17.

Two assists in Arsenal’s FA Cup final success over Liverpool reveals this was a player with several strings to his bow and his versatility really came to the fore a season later, with his side again chasing cup glory.

In the semi final against Stoke, goalkeeper Bob Wilson went down injured and it was Radford who put on the gloves, heroically frustrating the Potters all the way to a replay in which he scored the winner. That’s Roy of the Rovers stuff.

An early inductee into the English Football Hall of Fame, Bastin was a household name throughout the Thirties, known and admired for his prolificacy in red and white.

Indeed, so familiar was he that in 1941 Italian propaganda had it that Bastin had been captured while fighting in the Battle if Crete.

Unbeknownst to Radio Rome, the legendary figure had been excused active service due to deafness in one ear and was spending the war as a warden, on occasions standing atop of Highbury looking out for enemy aircraft.

Protecting the stadium in war, lighting it up in peacetime, Bastin was a true Gunner great.

A latecomer to the professional echelons of the game it always appeared that he was making up for lost time, putting in that extra five per cent of effort to all around him.

Ally this to a natural array of gifts and you have a phenomenon who fired 185 goals, great and good, across most of the Nineties.

Our recent Ian Wright net worth article detailed that the former Crystal Palace, Arsenal and England attacker has a personal fortune that is enviable. Gooners worldwide would insist he has earned – and was worth – every penny.

An invaluable member of the Arsenal Invincibles, who went the entirety of the 2004/05 Premier League season unbeaten, Henry was arguably the finest example of Arsene Wenger’s managerial genius, when ‘Le Professeur’ bought the French international winger from Juventus and transformed him into a devilish forward.

Furnished with lightning speed, along with an extraordinarily quick mind that had the footwork to keep up with it, Henry would go on to make every top-flight defender’s lives a living hell for eight years in the capital, scoring 228 times and establishing himself as a genuine great of our times.

Premier League Tips
Arsenal
About the Author
By
Stephen Tudor