One of Kenya's main medal hopes for Tokyo 2021, Hellen Obiri is a two-time world champion in the women's 5000 metres event. 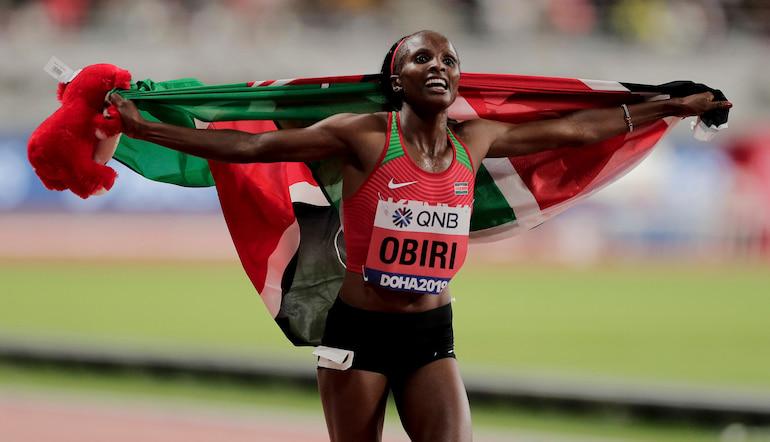 Born in December 1989, Hellen Obiri has been on the long-distance running scene for the best part of a decade and she will be involved once again at Tokyo 2021.

Obiri has gained a wealth of experience on the international stage, winning two world titles while claiming the silver medal at the 2016 Olympics in Rio.

While sports betting fans may not have heard of Obiri, keen athletics followers will know all about her – she has a genuine opportunity to win gold in Japan this summer.

The Kenyan athletics team is always strong heading into the Olympics but Obiri is one of the top medal hopes for the nation and the 5000m division is there for the taking.

Without further ado, we’re going to look at some of Hellen Obiri’s biggest achievements on the track ahead of what could be a huge summer for Team Kenya.

Obiri Does It On The Big Stage

Some athletes crumble under pressure, others thrive on the biggest platform. Obiri relishes the chance to showcase her talent against the best in the business.

The Kenyan star is a two-time world champion at 5000m and she has set national records for several distances, including the mile, 3000m and 5000m events.

Having won gold at the World Championships in 2017 and 2019, Obiri also has an Olympic silver on her resume – and she could go one better in Tokyo later this summer.

Like compatriot Faith Kipyegon, Obiri was named as one of the Top 100 most influential Africans in 2017 and she will have an entire nation behind her at Tokyo 2021.

Those looking for Olympics betting tips will see the name Helen Obiri crop up consistently in the long-distance running sections. That is a tip in itself!

Hellen Obiri Journey Not Over Yet

Athletics fans can follow Hellen Obiri at Tokyo 2020 but she also documents her life – both on and off the track – on her social media channels.

In fact, the Hellen Obiri Instagram page is well worth a follow for running fans. The Kenyan star often documents training clips and tips on how to stay fit and in shape.

In addition, Obiri regularly posts motivational messages on her Instagram and they can be helpful for those also training to run long-distances.

Tokyo 2020 might be her final chance to clinch an Olympic gold medal and she is going to give everything she can to finish top of the podium.

Hellen Obiri’s journey has been fascinating for athletics fans to follow but the Team Kenya stalwart may have one more chapter to write in Tokyo this summer. Watch this space…