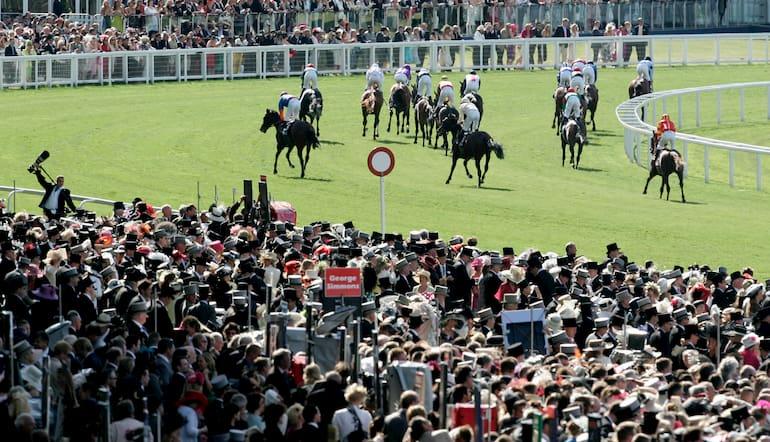 We hear their dulcet tones virtually every single day of the year but who exactly are the people behind those horse racing commentary microphones?

Here are just ten of the best horse racing commentators who bring our sport to life through their broadcasting wizardry.

Gareth is one of the youngest commentators on the racecourse commentary rotas, and has been calling them home for stations such as Racing TV, Sky Sports Racing and the former Channel 4 Racing since October 2012.

Based in Leeds, where he picked up a degree in Sports Journalism in 2010 at the Trinity University, Gareth is also a studio broadcaster for William Hill and works on a freelance basis.

Gareth initially cut his teeth commentating at point-to-point meetings, mainly at the weekend and he also has experience in race calling at Welsh harness racing fixtures.

Known to many as “Wiz”, Welshman Darren Owen is a familiar voice on British racetracks and has been an established commentator now since 1998.

Darren’s first race calling “job” as a young chap was when he was asked to step into the breach at his local harness racing track to cover some holidays.

Despite not really being into harness racing at first, Darren caught the bug, and after years of involvement in the sport he is now the current Chairman of the British Harness Racing Club.

Darren also racereads for the Racing Post as well as working for William Hill Radio, bringing listeners the latest horse racing betting, amongst other things. He is also one of the Grand National’s staunchest supporters which we like at 888sport very much!

Based in East Yorkshire, Malcolm Tomlinson is not only a horse racing commentator but he is also a thespian, having starred in several soap operas including ‘Emmerdale’, ‘Eastenders’ and ‘Hollyoaks’.

Other TV roles have included ‘Casualty’, ‘The Royal’, ‘The Bill’, ‘Grange Hill’ and ‘Cold Feet’. In fact his appearance list is pretty endless.

Malcolm’s two children, Eleanor and Ross, are also in the acting profession. Eleanor is probably best known for playing the character of Demelza Poldark in the BBC series “Poldark”.

As a commentator, Malcolm works for Racing TV and Sky Sports Racing and occasionally does spots for ITV Racing and BBC Radio 5Live.

Jerry shot to prominence with sports betting viewers/listeners in the UK after his infamous “Roaring Bull” commentary in the Paddy Power Chase at Leopardstown.

On social media the call went down a storm and Hannon can still be heard raising his voice a few more notches for effect whenever there is a driving finish.

Richard’s fledging career blossomed at Sha Tin (Hong Kong) in the early 2000’s before he went on to be one of the most recognisable voices in racing.

Richard was hired by the Hong Kong Jockey Club in 1997 as a commentator and presenter thanks to a recommendation from Australian commentator Jim McGrath.

The Aussie had told them that Hoiles, whilst working at SIS, was “revolutionising racing commentaries” in the UK.

Now the lead commentator on ITV racing, Richard has called at all the tracks in the UK as well as in South Africa, Canada, Japan and Dubai. His favourite is of course, Cheltenham racecourse.

You can hear one of Richard’s commentaries playing in the background in a scene shown in the T2 Trainspotting movie.

Referred to affectionately as the 'the languid one' by the late John McCririck, Simon has been commentating now since 1988, but initially journalism was his main priority.

Simon made his TV debut for Channel 4 Racing in 1994 at Newmarket and by the year 2000 he became their senior race-caller.

In 2010 he turned his hand to commentating on minor sports, including lawn bowls at the Commonwealth Games in Delhi for the BBC.

Many moons ago John gave up the life of a policeman after seeing an advertisement for a trainee racecourse commentator. Years later, John is a regular studio presenter for Sky Sports Racing and also a BBC Radio 5Live commentator.

Having turned down an approach from ITV when they first took over the terrestrial coverage of horse racing, John remained loyal to the BBC and has been rewarded since with Match of the Day commentaries, plus a whole range of other sports.

Mark is a horse racing announcer/commentator in both the United States and United Kingdom and he certainly knows how to whip up a racecourse crowd.

His Twitter biography states that he is the “only person to call both the Kentucky Derby & the Epsom Derby”, which is a truly remarkable commentary milestone.

Mark is also a race commentator at Jersey Race Club, having done so on the island for almost 30 years.

Stewart initially wanted to be a jockey but when he grew too tall for that vocation, he turned his hand to commentating and since 1998 he has graced the commentary boxes throughout the UK.

Machin is the son of a famous footballer - Ernie Machin, whose goal saw Coventry City promoted to the old Division One under the management of Jimmy Hill.

In April 2020, 4.8 million people tuned into ITV to watch the “Virtual Grand National”, a race for which Stewart provided the full commentary.

Sports broadcaster and commentator Mike Cattermole has always had passion for horseracing. After learning the ropes at Timeform, he went on to start a three-decade long commentating career and is still a regular face on our screens.

The first race call for Mike came at Fontwell Park in 1993 when clerk of the course Cliff Griggs welcomed him to the West Sussex venue with the advice of "don't f*** it up!"

Not many people are aware (or have forgotten) that prior to his TV work, Mike was Willie Carson’s agent from 1989 to 1993. In those five years, Willie clocked up over 700 winners.