Epsom Tips: Five Of The Biggest Shocks In Derby History

As the 2020 Derby edges closer, we look at five surprise winners of the Epsom Classic 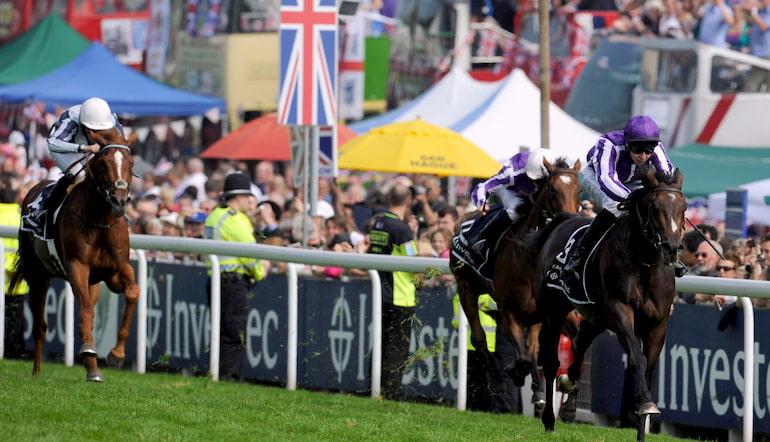 The Derby at Epsom Downs is one of the highlights of the flat racing season.

The build-up to the 2020 race has been somewhat unusual in these unprecedented times but it has had next to no effect on the excitement and horse racing betting hype ahead of this weekend’s race.

First held in 1780, the Derby has a rich history and this is the race that every trainer, jockey and owner wants to win.

Aidan O’Brien, who saddles six runners this weekend, is just one win away from surpassing Robert Robson, John Porter and Fred Darling as the trainer with the most Derby triumphs.

Just two weeks ago, we saw 150/1 shot Nando Parrado land the biggest shock in Royal Ascot betting history when winning the Coventry Stakes. Could an outsider emerge victorious in the Derby at Epsom this year? Only time will tell…

With horse racing betting tips on the most prestigious Classic doing the rounds, we focus on five of the biggest shocks in the history of the race.

If you managed to back any of these five Derby winners, well done – message us with your 2020 Derby fancies!

What do Jeddah, Signorinetta and Aboyeur have in common? All three were Derby winners at 100/1.

We’re focusing on the latter here, simply for the fact that Aboyeur clinched victory by a short head in an incredibly tense finale.

To this day, 100/1 remains the biggest priced winner in the Derby at Epsom.

Aboyeur gave Edwin Piper his one and only victory in the Derby – and the jockey only ended up riding the horse after his booked mount Knight’s Hey was scratched.

It’s funny how things often work out in horse racing but that is one of the main reasons why we love the sport.

The Tom Marquand-Frankie Dettori English King situation is different but could we see Marquand channel his inner Piper aboard Khalifa Sat in this year’s Derby?

Fifinella was the sixth and most recent filly to win the Derby which is why we’ve opted for her over the others.

In 1961, the Derby and the Oaks took place at Newmarket instead of Epsom but that didn’t matter to Fifinella – she went and won both races.

She went off at 11/2 and produced a late surge up the rail to claim victory, though it looked for a long time like she wouldn’t find a sufficient gap. A reduced Newmarket crowd went wild in the parade ring following the race.

Two days later, Fifinella won the Oaks. It was some achievement by this talented filly and she deserves her place in the history books.

While not entered in both races this year, 1000 Guineas winner Love could be the next superstar filly and could take all the beating.

Snow Knight had a relatively quiet profile going into the 1974 Derby at Epsom.

Having finished second in the Classic Trial Stakes at Sandown and then third in the Derby Trial at Lingfield, Snow Knight was overlooked in the betting at 50/1.

The Peter Nelson-trained colt had a bit of a reputation for his feisty attitude and he was spotted throwing jockey Brian Taylor off in the parade ring before taking an age to go into the starting stalls.

However, once out of the gate he was very professional indeed to become the highest-priced Derby winner for over 40 years before a certain Aidan O’Brien horse won in 2017.

Could we see another major shock in the 2020 race? This year’s race looks like a hot renewal and punters may find it tough to pick a winner.

Wings Of Eagles gave trainer Aidan O’Brien his sixth Derby victory in 2017 but it will almost certainly rank as his least expected success.

Priced at 40/1 going into the Epsom Classic, the son of Pour Moi had just one win to his name – and that came in a modest Killarney maiden.

O’Brien ran six horses in the race, with Wings of Eagles looking like the fifth choice Ballydoyle runner on jockey bookings.

However, Padraig Beggy gave Wings of Eagles a peach of a ride to pounce late to defeat stablemate Cliffs Of Moher.

Beggy rides Vatican City in the 2020 Derby and he will be hoping to build on the impressive run behind Siskin in the Irish 2000 Guineas last time out. He will be a popular pick in Epsom Derby tips this year…

One year later, we had another major shock but this time it was a Godolphin horse that was first past the post.

The Charlie Appleby-trained Masar stayed on stoutly to prevail, finishing two lengths clear of his rivals with a dominant performance.

Saxon Warrior went off at 4/5 but ultimately failed to justify favouritism, finishing some five lengths back in fourth.

Masar gave the bookmakers another excellent result after reversing the 2000 Guineas form with the Aidan O’Brien runner from earlier that year.

Kameko romped home to claim victory in this season’s 2000 Guineas and connections will hope that he stays the extra four furlongs. That is always the risk when stepping a horse up in trip but it certainly worked for Masar back in 2018.