Looking for the latest Haydock races news, dress code advice and Haydock Park tips? Scroll down for our complete guide to Haydock racecourse 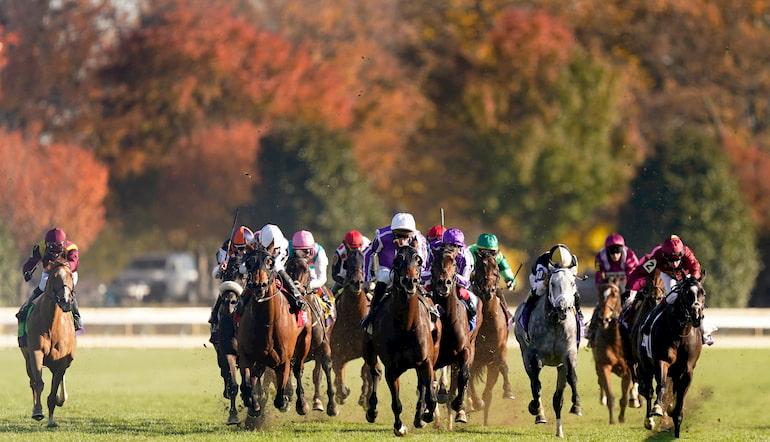 Haydock Park is one of the most used racecourses in the country, hosting approximately 32 racing days a year, with a mixture of Flat and Jump Racing.

Over the years, the Jockey Club-owned Haydock Park has become the home of some of the most popular races on the Northern racing circuit.

The principle races in calendar order are the Grand National Trial in February, The Temple Stakes in May, the Old Newton Cup and Lancashire Oaks in July, the Sprint Cup in September and the Betfair Chase in November.

If you enjoy looking at horse racing betting odds, these races have popular ante-post markets associated with them every single year.

The course at Haydock is pretty flat and is run left-handed. The one mile five furlong track features a small incline of four-and-a-half furlongs which can lend itself to a dramatic finish.

The flat races over five and six furlongs are straight, but longer races have a tight bend to negotiate.

The Steeplechase course also measures one mile five furlong and has a total of ten fences. At one time the obstacles at Haydock Park were second only to the Grand National course in terms of difficulty, but that is now debatable.

The hurdles course is slightly shorter than the full one mile five furlongs and has six flights to jump in total.

Haydock is a particularly busy course during the summer months and there are plenty of top quality Flat meetings that take place outside of the most well known ones.

The Old Newton Cup, the Temple Stakes, Sandy Lane Stakes and the Lancashire Oaks are all Group 2 contests in their own right.

Aside from the Betfair Chase, Haydock is also the home of the Peter Marsh Chase, The Last Fling Chase, the Champion Hurdle Trial, the Grand National Trial and the Swinton Handicap Hurdle, worth a massive £100,000.

Haydock is also where the finale of the Challenger Series is held.

The first Grade One Chase of the 2020/21 season in Great Britain, the £160,000 Betfair Chase, takes place at Haydock on Saturday, 21st November. The race is also the first leg of the National Hunt Triple Crown.

Staged over an extended three miles and one furlong, Haydock’s winter feature has attracted ten entries this year, with two of those coming from Paul Nicholls – the multiple winning Betfair Chase trainer.

Clan des Obeaux, who has won the King George VI Chase at Kempton Park on Boxing Day for the past two years, and Topofthegame, winner of the RSA Novices’ Chase at The Festival in March 2019 will be popular picks in the online betting.

Last year’s victor Lostintranslation (Colin Tizzard) and Bristol de Mai (Nigel Twiston-Davies), who was triumphant in both 2017 and 2018 are both entered, while Santini, winner of the Cotswold Chase before finishing runner-up in the Gold Cup at the Cheltenham Festival, also holds an engagement.

Lord du Mesnil (Richard Hobson) has something to find on the ratings but he is no stranger to winning at Haydock Park.

With only the first quarter of 2021 decided thus far in terms of the fixture list, one can only surmise that the Sprint Cup will take place once again on the first Saturday in September.

The 2020 renewal was won by the Sir Michael Stoute-trained Dream Of Dreams (5/2f) and it would come as no surprise to see him return to defend his title in 2021.

You can find Haydock Park tips here at 888sport, as well as via one of the following: Jockey Club App, Racing Post, Liverpool Echo, St Helen’s Star, Mull It Over Blog.

The County Enclosure encourages smart dress for both ladies and gentlemen. Haydock ask gentlemen to wear a buttoned collared shirt and smart trousers.

Jeans are allowed as long as they're not faded, distressed or ripped. Fancy dress, sportswear (including trainers) or swimwear is not permitted. Casual dress is permitted in all the other area of the site.

Haydock Park are exceptional at providing entertainment - whether that's a normal race day or one of their famous Haydock summer music nights. Click HERE to explore what’s on at Haydock Park Racecourse in the coming months.