St Leger 2020 Preview: Who Wins The Final Classic Of The Season?

Who will come out on top at Doncaster on Saturday afternoon? 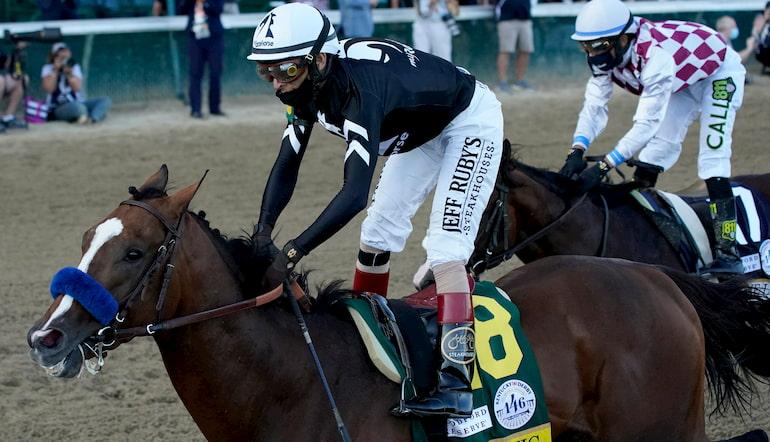 The St Leger Stakes is the final Classic of the season and takes place at Doncaster on Saturday 12th September. The race is confined to three-year-olds.

In recent years the two races that have supplied the bulk of the winners have been the Great Voltigeur and the Gordon Stakes with 12 out of 17 winners since 2000 running in either race on their previous start.

Just last year, Logician took the Great Voltigeur before going on to win the Leger. This year’s Great Voltigeur winner was Pyledriver, while the Gordon stakes winner Mogul, is not entered.

The Epsom Derby can also provide some interesting clues. Here is a runner-by-runner guide to this year’s renewal on Town Moor:

Before this season started Andrew Balding flagged up Berkshire Rocco as one of his main horses to follow this season, and despite not winning to date, he has been running consistently well.

After finishing second to English King in Lingfield’s Derby Trail, the three-year-old has chased home Santiago in the Queen’s Vase and Pyledriver in the Great Voltigeur and he was never that far away in all three races.

After Dawn Patrol finished second to stablemate Tiger Moth at Leopardstown he was set the task of running in the Irish derby, where he finished a very good third to Santiago.

Dawn Patrol has proved he can hold his own in a Group One and he may prove to be a lively outsider.

Unbeaten in all his three starts this season, Galileo Chrome was an impressive five-length winner of a Listed race at Navan last month and is now tackling Group One company for the first time.

Owen Burrows' colt has been faultless in his two runs this season. He was a ready winner of the King George V Stakes at Royal Ascot before taking last month's Geoffrey Freer Stakes at Newbury.

Hukum’s beating of Max Vega by two and a half lengths definitely pointed towards him seeing out this trip.

He was seen to good effect when a running on third behind Pyledriver at Royal Ascot and this step up to 1m 6f may just be the trip he is crying out for.

Mythical’s role here is likely to be a supporting one but 2020 has been a strange old season for sure and we all remember Serpentine in the Derby don’t we?

After some success last year, including landing the Ascendant Stakes at Haydock Park, William Muir’s three-year-old was the surprise winner of the King Edward VII Stakes at Royal Ascot, before experiencing a torrid run in the Derby at Epsom.

He then bounced back in fine style when he thrashed a decent field of horses in the Great Voltigeur at York last month.

William Muir is confident this son of Harbour Watch will stay the extra two furlongs, and it is little wonder he is proving to be a popular pick in the betting.

Great Voltigeur winners have an outstanding record in the St Leger and Martin Dwyer’s mount can scoop the last Classic of the season.

After ending last season with a maiden victory at Listowel, Santiago arrived on the three-year-old scene with a bang at Royal Ascot with an authoritative win in the Queen's Vase Stakes.

Outstaying his nearest rival to win by two and three quarter lengths, connections knew straight away that they had a St Leger prospect on their hands.

Next time out, Santiago was dropped back down to 1m 4f for the Irish Derby where he produced a career best performance to fend off stablemate Tiger Moth in the closing stages.

Showing all of his assured stamina, Santiago claimed his first Group One success. Santiago and Pyledriver are very closely matched and it is understandable that they are both vying for favouritism in the online horse racing betting.

Like most Mark Johnston runners, Subjectivist has been kept busy throughout the season.

A fortnight ago, Subjectivist was back on a racecourse and quickly putting his poor Great Voltigeur showing to bed as he scooted home to a visually impressive 15-length victory in the March Stakes at Goodwood.

He clearly relished the step up to 1m 6f that day and it is understandable why his connections fancied chancing their arm in this feature.

A winner of one of his six starts, Sunchart finished eighth to Santiago in the Irish Derby and on his latest run he only went down narrowly to Pista in the Listed Vinnie Roe Stakes over 1m6f.

Pista has subsequently endorsed that form by winning over 1m 6½f at Doncaster on Thursday, making Sunchart a very interesting outsider.

Whether this Iffraaj-colt can deliver the winning blow in a race like this remains to be seen, but his trainer Spencer did spring a 22/1 surprise (Bernardo O'Reilly) in Doncaster’s final race on Thursday afternoon, so one can never say never.

One paper the St Leger is pretty much shaping up to be a staying battle between Pyledriver and Santiago, but of course horse races are not won on paper and there are plenty of other horses who can have their say.

Pyledriver is our horse racing expert picks NAP, but we will also give a speculative each-way shout to Aidan O’Brien’s Dawn Patrol.