What types of horse racing can I bet on? Learn all about Flat horse racing and National Hunt jumps horse racing, and the attributes racehorses need to win. 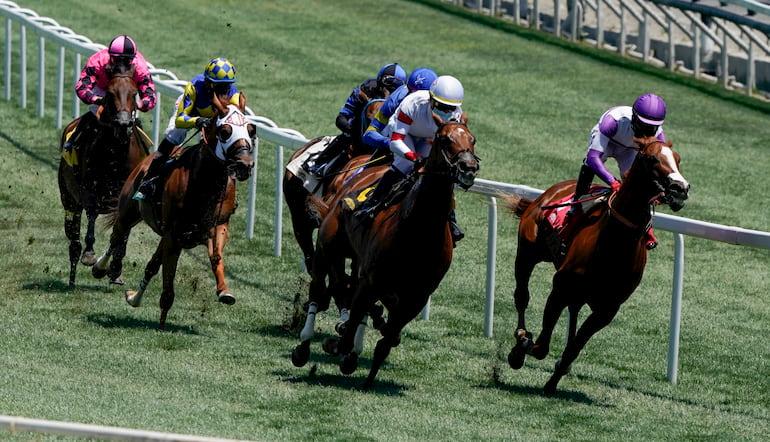 There are different types of horse racing throughout the world. In order to help you understand these and what is required to win when betting on them, we’ve put together this helpful guide that explains horse racing types and the differences between them.

In the UK and Ireland, where horse racing betting is at its most popular, there are two codes. On the one hand, there is the Flat which has turf and All-Weather race types, and jumps or National Hunt.

The difference between these different types of horse racing is that obstacles are jumped in the National Hunt code, whereas on the Flat horses never leave the ground.

Let’s look at these horse racing types in more detail separately. This is worth doing because different racehorses are suited to the different codes depending upon their attributes and breeding.

A thoroughbred horse’s pedigree can reveal clues to which horse racing race types will suit it.

We start with Flat horse racing. This takes place without any jumps involved at all. The horses are racing over distances which vary from five furlongs (a little further than half-a-mile, or about 1000 metres) right up to an extended two-and-a-half miles.

The longest Flat horse racing event in the British Isles is the Queen Alexandra Stakes at Royal Ascot over two miles, five-and-a-half furlongs (about 4350 metres).

That is a wide variety of distances which demand different things of the horses taking part.

A sprint contest over five or six furlongs requires the equine athletes taking part to have abundant speed. So-called middle-distance Flat horse racing includes events over a mile-and-a-quarter and a mile-and-a-half.

You will also find many Flat races are age-restricted. Two-year-olds are almost exclusively kept to racing against their contemporaries.

In the British Isles, no Flat horse racing takes place for juveniles over further than a mile-and-a-quarter with the vast majority of races being a mile or shorter.

Three-year-old colts and fillies are eligible for the Classics in that year.

These are prestigious and valuable age-restricted races that take place in the UK at Newmarket, Epsom Downs and Doncaster at different points in the season. In Ireland, all the Irish Classics are staged at the Curragh.

It follows that the longer the distance of Flat horse racing events, the greater the emphasis on stamina. In order to win middle-distance races, however, horses need to demonstrate both speed and endurance.

The softer the ground, the tougher a race is for Flat thoroughbreds because most of the season takes place during the summer months when the going is firmer.

During winter months, there is no racing on turf whatsoever in the British Isles but there is in other parts of the world, particularly the Middle East and Southern Hemisphere.

Some racehorses take better to the artificial All-Weather surfaces used during the Northern Hemisphere at this time.

In the UK and Ireland, the Flat turf season traditionally begins at Doncaster and Naas in late March respectively. This builds to the first Classics of the season, the 2000 and 1000 Guineas at Newmarket usually held on the first weekend of May.

Classic trials are held at various racecourses in the British Isles for the Guineas, Oaks and the national Derbies at Epsom Downs and The Curragh which are both held in June.

The summer festivals like Royal Ascot, Glorious Goodwood and the Ebor at York are massive social occasions as racegoers enjoy the sport in the sunshine.

This is followed by the St Leger at Doncaster – the final Classic of the British season – and Irish Champions Weekend in the Emerald Isle in September.

By the end of October, the Flat horse racing season draws to a close following British Champions Day at Ascot and valuable two-year-old races at Newmarket and Doncaster.

There is also an international focus in the autumn with world-renowned races like Prix de l’Arc de Triomphe at Longchamp in Paris, France and the Melbourne Cup at Flemington in Australia often targeted by top European trainers.

Aidan O’Brien has dominated Irish Flat racing throughout the 21st Century, while the UK has seen John Gosden exert a similar influence in recent times thanks to star racehorses such as Enable and long-distance specialist Stradivarius.

Flat racehorses often have shorter careers because they stand at stud after retiring.

In National Hunt, there are hurdlers and chasers. Hurdle horse racing is where most in this code begin.

They may run in bumpers instead: these are National Hunt Flat races which get some experience into them from the age of three onwards if they have had no career in the other code.

As the minimum distance for all proper National Hunt hurdles and steeplechases is about two miles, there is already a great emphasis on stamina rather than speed.

The range of events in National Hunt horse racing vary from two miles up to four-and-a-quarter miles. That illustrates how this is about endurance and jumping more than having a turn of foot.

Almost all male National Hunt racehorses are geldings because if they remained entire then their anatomy would get in the way of jumping obstacles.

Horses can come into the jumps world from the Point-to-Point field as well. These are usually age-restricted events held at much smaller and lesser-known venues around the British Isles. They are also different to regulation National Hunt fences.

In order to be good at hurdle horse racing, an animal needs to be slick and almost flick through the top of the birch panels that are stuck at a slight angle out of the ground.

There is a fine line and little margin for error with their jumping though, as a horse like Buveur D’Air has demonstrated in recent years.

Horses that make good steeplechasers have to be large and scopey because fences are around four feet tall. As with the Flat, the tougher the going underfoot, then the more stamina comes into play.

Unlike the Flat, the horse racing jump season officially begins in October and ends in early May with the Punchestown Festival in Ireland.

There is summer jumping on both sides of the Irish Sea, but this is not supported by the same prize money as you get during the winter months. Steeplechases also tend to be more valuable than hurdle races.

National Hunt horse racing evolves to a large extent around two events in particular in the British Isles. As Cheltenham Festival betting has become so huge, that in turn tells you that it is one of the main jumps extravaganzas during the season.

Held over four days in March, everything beforehand including a packed Christmas and New Period, plus the Dublin Racing Festival at Leopardstown builds to it.

Two-thirds of UK adults get involved in Grand National betting and odds, so that event at Aintree Racecourse near Liverpool in April is the other main event in National Hunt horse racing.

It is the world’s most famous steeplechase and run as a handicap rather than a weight-for-age race, which both codes of the sport have.

The concept is 40 runners tackling an extreme stamina test of four-and-a-quarter miles over 30 spruce-covered fences – many of which are bigger than regulation size.

Other big races to look out for during the National Hunt season are the King George VI Chase at Kempton Park, and the Champion Hurdle and Queen Mother Champion Chase which are both at Cheltenham.

There are many bet types of horse racing for punters, but the most popular in online betting are backing horses to win.

You can also bet each-way, which is two bets in one - the first for an outright win and second for place. The place terms on offer will vary between a quarter and a fifth of outright odds depending on the type of race and number of runners.

You can also place multiples or accumulators. These involve backing horses in different races and the odds accumulate from one leg to the next.

There is also the option of backing a horse to finish first and another to be second in one bet in the same race. This is called a forecast or exacta.

Whatever form of the sport you’re into, the different types of horse racing have something for everyone and you should now be wiser about the events that take place in this and related disciplines.

Epsom Tips: Five Of The Biggest Shocks In Derby History