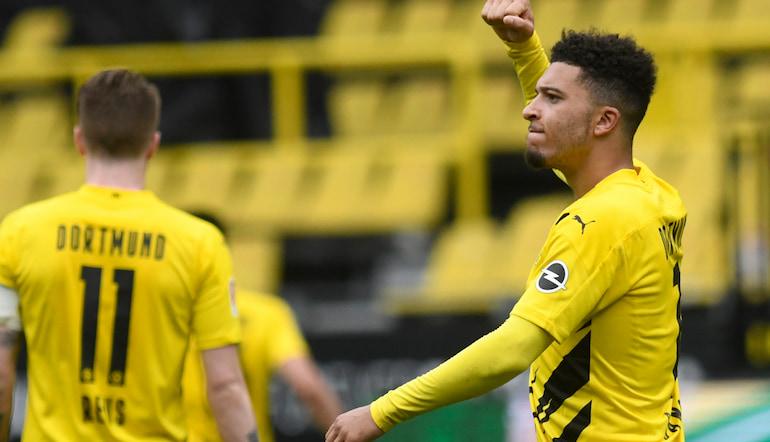 Jadon Sancho is only 21 years old, yet he’s already a massive figure in Bundesliga betting. Sancho is one of the best young players in world football.

He’s already amassed an enormous net worth, a figure that’s only going to grow in the coming years as he stars on the domestic and international stages.

How Much Is Jadon Sancho Worth?

Sancho transfer rumours are everywhere. He’s become a must-watch at Dortmund alongside Erling Haaland, but a Premier League return seems inevitable in the next couple of years.

Read below for information on Jadon Sancho net worth, his next club, and more…

Jadon Sancho’s net worth is in the region of £6 million. He might still be young, but Sancho has been a major star in football betting markets for several seasons already.

The England international is on course for an all-time great career, and there are several more massive contracts in the pipeline for the former Manchester City winger.

Alongside a hefty salary from Borussia Dortmund, Sancho also has endorsement deals with EA Sports and Nike.

His role in promoting Nike football boots and clothing is growing as his career blossoms. Like many young football stars, he is at the forefront of promoting FIFA, particularly Ultimate Team.

Sancho’s £6 million net worth is a remarkable figure for someone who has only just turned 21. It’s destined to soar in the coming years.

Jadon Sancho’s salary is thought to be just under £200,000 per week, according to Goal. This puts him in line with Dortmund teammates Marco Reus and Erling Haaland and matches up well with Premier League wages.

Only a handful of players in England’s top flight are on more per week than Sancho. If he does move to the Premier League in the next couple of years, he’s likely to get a salary increase, which will make him one of the highest earners in the league.

Football salaries are a contentious topic. Sancho is among the elite in the sport, and he’s got a wage befitting of that status. He’s likely to become one of the highest paid players in world football in the coming seasons.

The future of Jadon Sancho is the centre of soccer prediction discussion. He’s a player with the talent to change the fortune of a club, to immediately become an integral player, and who can remain an elite creator into the 2030s.

The Red Devils have been relentlessly linked with the England international over the last year or so, however, and failed to meet Dortmund’s asking price last offseason. United may be the betting favourites, but it’s not overwhelming.

Most bookies have Chelsea and Liverpool at around the same price as second and third favourites to land Sancho.

A move back to Manchester City is a longshot at this stage, with the Premier League champions sitting at a similar price to Tottenham and Arsenal.

One thing is clear: Sancho next club odds suggest it will be a move to the Premier League if he leaves Dortmund. This is a saga which will rumble on and on...

A childhood fan of the west London club, having grown up in Kennington, Jadon Sancho to Chelsea rumours are plentiful.

Chelsea are loaded in the attacking third. Sancho would be a want rather than a need for Thomas Tuchel’s squad, but that hasn’t stopped Roman Abramovich splashing the cash before.

While they already have players in his position, there’s no question Sancho would be a starter for the Blues.

It would be a real luxury for Chelsea to sign Sancho. Acquiring a new striker and central midfielder is surely more important than getting yet another wide player.

With that said, sometimes clubs cannot resist the opportunity to sign a player of Sancho’s calibre.

Ole Gunnar Solskjaer has a clear need on the right flank, and the Red Devils undoubtably have the spending power to pay Dortmund’s asking price.

Heading into the summer window, though, this could come down to priorities for Manchester United.

Adding a right-sided player to complement Marcus Rashford, Bruno Fernandes and Anthony Martial is a must, but Solskjaer should also be on the lookout for a defensive midfielder and centre-back.

Will United spend enough to address those issues and sign Sancho?

Liverpool need to spend this summer. Jadon Sancho has been reported as a target for the Merseyside giants in the past, and it will be interesting to see if they take that a step further.

Jurgen Klopp may look for attacking reinforcements after a difficult season for Sadio Mane. Roberto Firmino isn’t the force he was a couple of years ago.

The signing of Diogo Jota has been a wonderful success, but they clearly need more options in the front three with Divock Origi and Xherdan Shaqiri proving to be non-factors.

Pairing Sancho with Mo Salah and Mane is a scary prospect for the rest of the Premier League. Much like Manchester United, though, Liverpool may look to bolster other positions before adding a forward, and Sancho could prove to be out of their price range.

Where other sportspeople plaster their social lives all over social media, Jadon Sancho has done a brilliant job at keeping his private life as just that.

Sancho has a daughter, who is a couple of years old. Little is known about Sancho’s daughter or his relationship status, however.

The occasional snap is shared of the Dortmund forward and his daughter together, but her name isn’t known by the general public, and reporting is unclear on who the mother is.

With five and a half million followers, Jadon Sancho is very popular on Instagram. He tweets from the handle @sanchooo10.

Posts are generally just photos from match action, with the occasional advert in there and sometimes a glimpse of his training routine.

Sancho’s Instagram isn’t the place to get your Euro 2021 predictions, but with England destined for a deep run this summer, he could see his following surge in the coming months.