Jordan Pickford Net Worth – How Much Does The Everton Keeper Earn?

How much is Jordan Pickford worth? We look at the Everton goalkeeper's salary and total wealth, as well as his life off the football pitch... 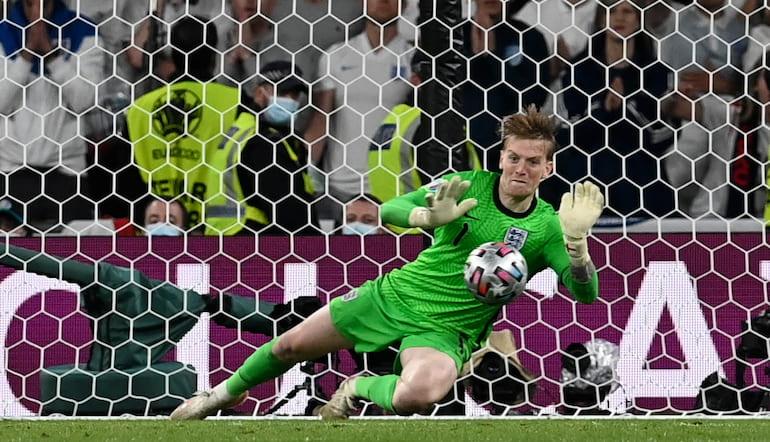 Born on the 7th March 1994 in Washington, Tyne and Wear, Jordan Pickford grew up supporting Sunderland, who he would join as a youngster having shone as a goalkeeper.

He signed his first professional contract in 2011 with the club, but was loaned out to numerous clubs in subsequent years.

It was when he signed for Everton in 2017 however that his career really took off, after a stellar final season at Sunderland, despite their relegation.

Since this move, he has established himself as the number one goalkeeper for both club and country. This rise has understandably seen him develop a large net worth.

How Much Is Jordan Pickford Worth?

Jordan Pickford is thought to have a net worth of £36m. This is not a surprising amount for England’s first choice goalkeeper, and a regular Premier League player for over five years.

In the early stages of his career, he would have been on modest wages. However, a good debut season at Everton saw him sign a six-year contract in September 2018 that netted him £5 million per year.

On top of that, Pickford recently signed a sponsorship deal with Puma that will add further millions to his worth, having previously been tied to Nike.

After a good Euro 2020 competition, and with plenty of his career still ahead of him, Pickford will be hoping to establish himself as one of the Premier League’s best goalkeepers, further consolidating his wealth.

Jordan Pickford and Megan Davison were childhood sweethearts who first got together at school and have been an item ever since. Megan has been at his side throughout and moved to Liverpool with Jordan when he transferred to Everton.

The couple finally married in a low-key ceremony in March 2020. The previous year they also welcomed a baby boy to the world, Arlo George.

Megan has not given up on her dreams after moving to Liverpool, and in 2020 graduated from Sunderland University.

On her Instagram account, which has amassed over 90,000 followers, she posted a photo of her in her graduation gown at Sunderland’s ground.

The rest of her feed includes photos of her travels around the world with son Arlo and her friends, often in England kits supporting the England team. Football odds suggest they will get plenty more opportunities to support him and the team in the coming years.

In the summer of 2018, Jordan Pickford and his fiancée Megan moved into their new £2.1m mansion, situated in Knutsford, Cheshire, a favourite location for many footballers.

Neighbours include international teammates John Stones and Jordan Henderson - little surprise therefore that the area is known as the Golden Triangle.

The mansion itself is covered in black and white marble and adorned with family photos. An open plan kitchen includes a designer breakfast bar, and elsewhere you will find a private cinema, a jacuzzi and a huge garden overlooking a golf course.

It has been reported that Megan’s pride and joy is in the bedroom, next to a velvet chair, namely, a huge gilded gold mirror. The house is a fitting reward for the hard work and success that has typified Jordan’s career.

Jordan Pickford is 6-foot 1 inch tall, or 1.85 metres, which seems an acceptable height for a goalkeeper.

However, many observers have debated whether he is actually too small for his position, with the average height of a Premier League goalkeeper currently standing at 6-foot 3 inches.

His height has even been criticised by fellow goalkeepers such as Thibaut Courtois, who is a whole 15 centimetres taller than Pickford. This criticism occurred after England lost 1-0 to Belgium, to a goal Pickford attracted much criticism for.

Leaving such discussions aside Pickford’s relative lack of height has not affected his performances and should not be seen as an issue.

There may be a perfect height for a goalkeeper that is greater than Pickford’s, but more important factors to consider are reaction skills, kicking ability, agility, and anticipation.

Jordan Pickford made all the headlines early in the 2019/20 season in a very feisty Merseyside derby when in the sixth minute of the game, the ball fell to Virgil Van Dijk close to the Everton goal.

Pickford rushed out to block the anticipated shot, but in doing so clattered into Van Dijk’s leg, damaging his anterior cruciate ligaments.

Van Dijk would not play again that season, or for his country in the Euro 2020 finals, and Pickford somehow avoided a red card as the referee was distracted by an offside decision.

The incident attracted headlines for weeks to come, but ultimately it was nothing more than a badly misjudged attempt by Pickford to block a shot.

Van Dijk would return to the Liverpool side for the beginning of the following season, Premier League Odds suggesting his return may well revitalise Liverpool. As for Pickford, he managed to put the incident behind him and enjoy an excellent season.

Jordan Pickford broke into the England side in the same season that he made his big money move to Everton, having previously represented England at all youth levels.

His breakthrough came in August 2017, when Gareth Southgate picked him in the senior squad for two World Cup qualifiers.

Unfortunately, he had to withdraw with injury but would make his debut in a draw against Germany in November that year. Having been picked in the 2018 World Cup finals squad, Pickford has been England’s first choice goalkeeper ever since.

His performances that summer helped England get to the semi-final and in 2021, Pickford became the first goalkeeper in history to keep clean sheets in the first five games of a European Championship.

Those into betting would be wise to back consolidating his place in the England team for many years to come.

Jordan is fairly active on his Instagram account, under the name jpickford1, and it has proved a very popular account, with a cool one million followers.

Jordan posts a variety of photos of him on the pitch, enjoying family time and some heart-warming photos of his charity work.

Like his wife on her account, Jordan is protective of their son, and is clearly keen to keep him out of the spotlight, which is why his face is not shown in family photos.

For those into Premier League predictions, expect Pickford’s stock to improve, and thus his Instagram to become more and more popular, detailing the well-travelled, fun-loving keeper’s rise in the game.

Premier League Betting Tips
About the Author
By
Stephen Tudor