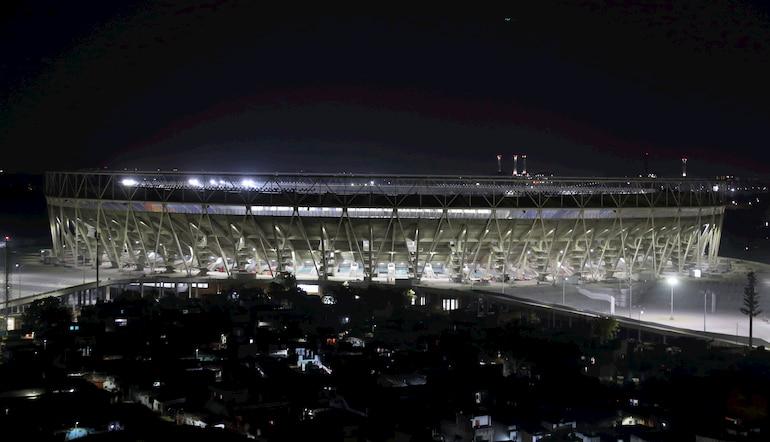 The largest cricket stadiums in the world can rival the biggest football stadia for capacity and atmosphere. Cricket betting odds can swing as a direct result of a tense feel around the ground.

Tens of thousands will pack in for the marquee IPL matches or Tests, hitting a decibel level unfamiliar to committed County Championship fans.

While there are some of the world’s best cricket stadiums in England, none come close to making the top 10 when we look at capacity.

Largest Cricket Stadiums In The World:

The sport is quaint and calmer in England with a massive audience for international matches, but the arenas are smaller than their Indian and Australian counterparts which combine for this article.

Many of these largest cricket stadiums in the world have been home to special cricket betting moments, World Cup matches or spectacular individual performances.

A modern stadium having been built at the start of the 2010s, the catchily named Jharkhand States Cricket Association International Cricket Stadium is the first to have hill stands in India and, at the time of writing, has hosted nine international matches.

Like seemingly every cricket venue in the world, the stadium has witnessed a Steve Smith Test match century back in 2017. There have been six Test tons in just two matches – it has also been an occasional home for the Chennai Super Kings.

The second-eldest stadium in India, MA Chidambaram Stadium is named after a former BCCI president and has been the venue of several historic acts in the history of Indian cricket.

Their first Test victory came at the stadium (then under a different name) in 1952, 18 years after it hosted India’s first ever Test.

It’s not limited to the red ball, however. MA Chidambaram Stadium has been the home of Chennai Super Kings and it has hosted multiple World Cup matches across three different competitions.

The Adelaide Oval is not only one of the biggest cricket stadia in the world – it’s also one of the prettiest. The stadium is used for all sorts, but it’s primarily a cricket and Aussie Rules venue.

The first cricket match was played on the ground back in 1873, Donald Bradman hit a then-highest Test score in the 1931, and the stadium received widespread compliments for its 2014 redevelopment.

The Adelaide Oval has stood the test of time.

It’s a multi-purpose venue, and as such, does not have the same charm as some of the cricket-specific arenas around the world, but the 55,000 makes up for that.

A newbie on the cricket scene, Greenfield only opened in 2012 and didn’t host an international match until 2017. The first match was reduced to eight overs per side because of rain.

India won it, and beat West Indies in the venue’s second international match but lost the most recent clash in a T20 to the Windies in 2019.

Another ground capable of housing 55,000 fans, Rajiv Gandhi Stadium was home to the Deccan Chargers, who have become Sunrisers Hyderabad. Poor results for Deccan resulted in a dressing room rearrangement to break their bad luck.

One of the best Indian cricketers of all-time, VVS Laxman has one of the ends named after him, though his career came a few years too early to really enjoy his home stadium.

One of his successors in India’s batting line-up has enjoyed great success at Rajiv Gandhi – Cheteshwar Pujara has scored 510 runs in five Test innings.

Perth Stadium is usually referred to as Optus Stadium. The ground is a multi-purpose venue used for Australian Rules football and cricket with the Perth Scorchers playing their Big Bash home matches at the venue.

It only opened in 2018, but it took little time to get international cricket to the stadium – the first match was played seven days after the official opening.

Shaheed Veer Narayan Singh International Cricket Stadium has been a second home for the Delhi Daredevils since 2013.

Despite Sunil Gavaskar claiming it is one of the best stadiums in India, the BCCI have not utilised it for international matches.

There’s been some high quality T20 cricket at the stadium – the population of Naya Raipur will be hoping they get to see some India matches in the near future.

Eden Gardens is a bucket list stadium for every cricket fan. It’s India’s answer to Lord’s, an iconic sporting venue rich in history.

The first Test was hosted before the Second World War, yet Eden Gardens remains at the forefront of cricket. The 2016 T20 Final was held at the stadium as Carlos Brathwaite dispatched Ben Stokes into the Kolkata sky.

The Kolkata Knight Riders have the honour of calling Eden Gardens home – KKR got the highest team score in IPL history at the ground in 2019.

Cricket fans will be searching for their bets calculator as they prepare for Boxing Day Test matches.

Melbourne Cricket Ground, usually referred to as the MCG, hosts one of the highlights of the cricketing calendar on December 26th every year.

Having hosted the first Test and the first ODI, the MCG is central to the progress of international cricket. Its place in history will never be diminished.

Sardar Patel Stadium was initially built in the 1980s before being demolished in 2015.

A complete rebuild was undertaken, with the new stadium owning a 110,000 capacity, making it the biggest cricket stadium on the planet and the second biggest stadium overall - only Rungrado 1st of May Stadium in Pyongyang has a greater capacity.

Only re-opened early in 2020, Sardar Patel Stadium has not hosted an international match since its capacity boost.