Manchester City Top Scorers History - Who Has Most Goals For The Citizens?

Who is the top goal scorer in Manchester City's history? We look at the 10 highest scorers in the club's history... 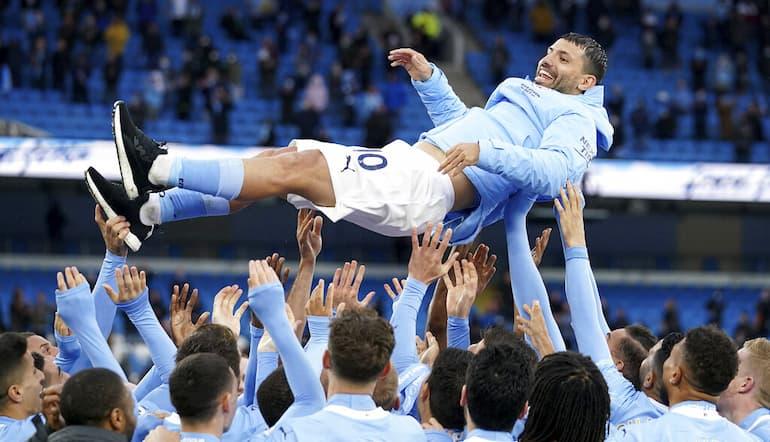 Led by a man who often featured in Premier League top scorer odds, this collection of City stars is a journey through the history of the club from the 1890s through to the glories under the management of Roberto Mancini, Manuel Pellegrini and Pep Guardiola.

Plenty played years before European football tips were even a topic of discussion. Others enjoyed success on the continental stage. Here are the 10 leading goal scorers in the history of Manchester City.

Plying his trade for Manchester City between the wars, Fred Tilson doesn’t immediately come to mind when thinking of the best Manchester City players of all-time, but the former striker is an inductee of the club’s Hall of Fame.

Tilson enjoyed promotion to the top flight early in his City career, and featured in several deep FA Cup runs. He moved to Northampton Town in 1938, but returned to Manchester as chief scout in his post-playing career.

Twice winner of the Second Division and lifting the FA Cup in 1904, Billie Gillespie played in a very different era. Football before the First World War was a far cry from the glitz and glamour of City’s 21st century megastars.

Gillespie, though, was a big name at the club in his era, signing from Strathclyde in 1897.

Prolific throughout his period with the club, his stint came to an end in controversial when he refused to pay a fine from the FA and moved to the United States.

Debuting for City in 1913, Tommy Browell had such an impact at the club that a street near Maine Road was named after him.

Putting up impressive numbers with both Hull and Everton and catching more than his fair share of headlines, Browell signed with City for £1,780 and was immediately impacted.

The First World War stole some of his peak years, but he returned to goal scoring form when sport resumed and finished with 139 goals for the Manchester club.

The star man through one of Manchester City’s most successful periods, Francis Lee was believed to be the final piece of the puzzle when he arrived from Bolton.

He lived up to the hype and then some, even scoring in their final day win to secure the league title.

It’s no secret that Lee’s goal tallies were boosted by penalties and there were accusations of diving – it could be argued his skill for winning spot kicks was a sign he was before his time.

First playing for Manchester City in 1894, Billy Meredith’s final appearance for the club came three decades later (there was a spell with Manchester United in between two City stints).

Meredith avoided injuries throughout his career thanks to extreme agility and fitness. He approached the game with a level of seriousness that many of his peers did not – he did not drink or smoke, and committed to numerous additional training sessions.

With quick feet and crossing ability, Meredith was primarily utilised on the flank, which makes his goal tally all the more impressive.

His impact on the game went far beyond the on-pitch, however, as he was a driving force in the founding of the Players’ Union.

The club’s third-highest goal scorer at the time of his retirement, Joe Hayes won an FA Cup with Manchester City in the 1950s and was prolific for several seasons in a row.

Like so many players in that era, though, a knee injury impacted Hayes’ abilities. He was never the same player, losing some of the burst that made him such an effective inside forward.

The Kearsley native moved to Barnsley in 1965 and finished his career with Wigan.

The King of the Kippax was long regarded as Manchester City’s greatest ever player. Modern stars have surpassed Bell in that category, but he remains a club legend and their fourth-highest goal scorer of all-time.

Combining sublime technical ability with Olympian-level fitness, Bell had nine consecutive seasons of 10 or more goals for the club.

He won honours domestic and continental with City, and was inducted into the English Football Hall of Fame in 2005.

Known for a lethal left-footed shot, Tommy Johnson spent the first decade of his career with Manchester City and holds the club record for the most goals in a single season with 38.

He left to play alongside Dixie Dean for Everton in 1930, however, and then joined Liverpool.

Like so many players, Johnson’s career was bookended by the Second World War. He played his final match for Darwen in 1939.

Manchester City’s all-time leading scorer for the best part of a century, Eric Brook played for the club from 1928 until the start of the Second World War.

He was at the centre of FA Cup and league wins and put together 11 consecutive seasons with at least 10 goals in all competitions.

Brook remained at the club through ups and downs, but his career was brought to an end when he suffered a fractured skull while traveling to a wartime international against South Africa.

Quite simply one of the greatest players to feature in Premier League predictions, Sergio Aguero looked destined to hold this record from the day he arrived at the club.

Aguero cruised by Brook’s tally, enjoying eight seasons with 20 or more goals and five where he reached 30 or better.

Amid five league titles and numerous other cups, it goes without saying that Aguero’s goal against QPR in 2012 is the defining moment of his footballing career and a lifelong memory for City fans.