The Magpies were the most exciting team on the planet during Kevin Keegan's tenure - we take a trip down memory lane... 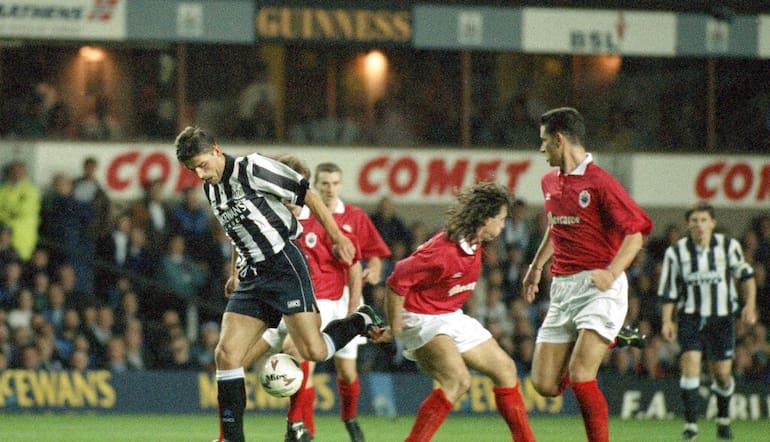 There was so much to enjoy about Kevin Keegan and his time at Newcastle United. From public feuds with Sir Alex Ferguson to earning the ‘Entertainers’ nickname, it truly was an era to savour.

For five glorious years, Newcastle were arguably the most exciting team on the planet. The Magpies were 100% attacking and we loved them for it.

Having led the club to the First Division title in 1992/93, Keegan was an instant hit in the top flight as Newcastle finished third in their debut Premier League campaign.

Cult legends such as Steve Howey, Rob Lee and Peter Beardsley were prominent figures at St James Park during the era – while Pavel Srníček was a pillar between the posts.

Never fighting it out in Premier League relegation betting odds, the Toon Army finished in the top six in each of their first four seasons in England’s elite division.

Keegan was named Premier League Manager of the Month five times during his time at the club, which is testament not only to his managerial prowess but his exciting group of players.

However, it wasn’t all plain sailing for Keegan – he had to make some big calls. Fans were in uproar after he decided to sell Andy Cole and buy Alan Shearer, but that didn’t turn out too bad in the end…

Keegan made the unusual decision to speak directly to Magpies fans outside the ground, providing his reasoning for Cole’s departure. It was a bold move but one that earned him plenty of respect.

Kevin Keegan talking to fans outside SJP about the sale of Andy Cole. Crazy to think how open the club used to be. pic.twitter.com/T60CblHO1D

We simply cannot talk about Keegan’s time at Newcastle without mentioning that rant. Was it simply a case or Ferguson getting to him or was this some bizarre attempt at reverse psychology by King Kev?

Either way, Newcastle were the ones who suffered as Manchester United lifted the Premier League title yet again. And with that, Keegan’s rant went down in folklore as a meltdown.

The Magpies had been clear online football bet favourites that season but squandered a 12-point lead at the top of the table to hand the trophy to the Red Devils.

To this day, Keegan is still haunted by those famous words. Supporters share snippets of the interview on Twitter while friends imitate the Newcastle boss down the pub.

Ferguson was the master of mind games, with perhaps only a peak Jose Mourinho able to hold his own against the scheming Scot. And in this particular battle of wits, Keegan certainly lost…

From Faustino Aprilla to David Ginola, this was a Newcastle side that was blessed with talent, charisma and charm – and they had a fearless leader in King Kev.

Under the new regime, the sky is the limit for Newcastle United when it comes to trophies but the legacy of Keegan’s side will never be forgotten.

Memories will be made at St James’ Park for years to come but it is important to remember that Keegan’s Newcastle were once regarded as the most exciting team in the land.

Go back and watch Newcastle in the mid-1990s if you get the chance. Their games were both fast and furious, and even now – you always feel like there’s going to be another goal either way.