The 10 Most Shocking First-Round Picks In NFL Draft History

There are one or two surprise picks in every NFL Draft but here are the 10 most shocking rookie selections... 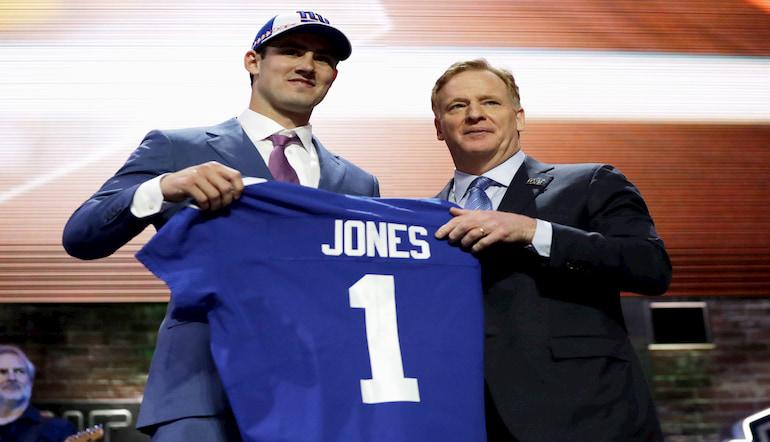 The NFL Draft is a year-round process. Scouts commit hour upon hour to watching college games.

Finding a late-round gem is the dream, but it’s the first-round selections where there’s the most pressure. NFL front offices are defined by their first-round picks, particularly if they are lucky enough (or bad enough) to be picking early on.

Hunting for a franchise quarterback or a special talent to fix a dire need, the first-round NFL Draft picks arrive in the league with great expectation.

Their performances, right from their NFL debut onwards, will be analysed in-depth and the fan base will be desperate for them to succeed. Failure to hit with first-round picks can leave franchises in the doldrums.

While the rumour mill gives a good idea of who will go in the first round, there are always some surprises. Here are the 10 most shocking NFL first-round draft picks…

Certainly one of the greatest names in NFL Draft history, the Oakland Raiders took Darrius Heyward-Bey with the seventh pick in 2009. Al Davis had a penchant for the surprising on draft night, and Heyward-Bey might just be the pick of the bunch.

The wide receiver had 13 touchdowns in three college seasons. His elite speed at the combine lured in the Raiders, but it proved to be a mistake as Heyward-Bey registered just 11 touchdowns in four seasons with Oakland.

The first overall pick is usually known well in advance. Sometimes teams sit on the fence for a bit, but it’s usually public knowledge who is going first overall well before the draft starts.

The 2006 draft wasn’t like others. Intrigue grew around the Houston Texans’ selection as draft day approached. A showdown with the 49ers had been seen as the ‘Reggie Bush Bowl’, such was the certainty that he’d go first overall.

Houston cooled on Bush, however, and ended up taking Mario Williams. It raised eyebrows at the time but proved to be a great pick.

The New York Jets were sucked in by Vernon Gholston’s pre-draft workouts. They took Gholston with the sixth overall pick despite minimal proof he was of NFL quality in college.

He managed just five starts across his three seasons in the NFL. It was a gamble by the Jets, and one that absolutely did not pay off.

The error is only exaggerated by the players taken after Gholston, including Pro Bowlers DeSean Jackson and Aqib Talib and Super Bowl-winning quarterback Joe Flacco.

A conflict between starting quarterback John Elway and the Denver Broncos might have been what led to Tommy Maddox going 25th overall in 1992.

Picking a young quarterback to learn from a veteran is commonplace, but this was an unorthodox time to do so.

The Broncos had gone deep into the playoffs in the previous season. A player to help them immediately seemed most likely. Instead, they shocked the league and took a quarterback with minimal college success.

Almost two decades after the Maddox shocker, the Denver Broncos once again stunned the NFL on draft night with a high-risk quarterback selection in the first round.

Now a baseball player, Tim Tebow was a controversial athlete in college, even getting a rule named after him. As he headed for the draft, Tebow was expected to go in the third round, and very few saw him as a late-first round selection.

The Broncos did. Denver traded second, third and fourth round selections to trade up and select Tebow. He played just two seasons for the Broncos and was quickly out of the league.

This one is a bit different from the others. Randy Moss going 21st overall was a surprise because many expected him to go way earlier. One of the greatest players to play in the NFL wasn’t even the first wide receiver taken in the 1998 draft.

It would be a mistake to overlook the off-field issues that saw Moss fall to Minnesota. They didn’t hesitate to take him, though, and he repaid that faith with an Offensive Rookie of the Year campaign and a Hall of Fame career.

Eight selections after Minnesota took Moss, the Miami Dolphins opted for John Avery. Avery, like others on this list, earned support for his pre-draft workouts despite never starring in college.

He survived just one year in Miami before being dealt. The criticism the Dolphins received at the time only got worse as his rookie season went on.

Moves don’t come much more ‘all-in’ than what the Saints did to land Ricky Williams. New Orleans gave up their first, third, fourth, fifth, sixth and seventh-round picks in the 1999 draft and their first and third rounders in the 2000 draft.

Williams had been a college superstar and was destined to go high. Being fifth overall was fair, but what the Saints gave up was stunning. He had a decent NFL career, though nothing worthy of the draft capital given up.

Three years after the Avery pick, the Dolphins were the talk of the first round once again when they took cornerback James Fletcher 25th overall.

Fletcher had a solid NFL career, but it was his fit on the Dolphins that made this a weird move. Miami already had two elite corners and had plenty of work to do on the rest of the roster.

Their franchise history could look very different if they took Drew Brees, who is in the conversation as the greatest quarterback in NFL history. Brees was taken seven picks later.

With Kyler Murray going first overall, Dwayne Haskins looked set to go to the New York Giants with the sixth pick. Looking for their Eli Manning replacement, the Giants instead opted for Daniel Jones, who had been underwhelming in college.

New York also owned the 17th pick in the draft. They took Dexter Lawrence with that selection, but probably could have waited for Jones and taken Josh Allen or Devin Bush with the sixth pick.

NFL Betting
NFL Draft
About the Author
By
Sam Cox