Who is Paul Gascoigne and how much is he worth? We look at Gazza net worth estimates as well as his football career and family life 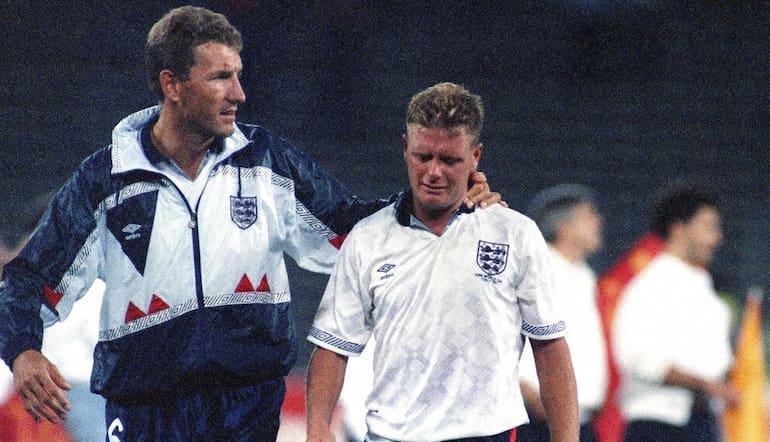 Paul John Gascoigne was born in Gateshead, County Durham on May 27th, 1967 and it’s fitting that the most naturally gifted footballer of his generation was named after one half of the Beatles, given the mania that accompanied his rise.

In the mid to late Eighties, chubby in the face and with the world at his feet, a teenage Gascoigne exploded onto the scene, scoring sensational goals for his hometown club Newcastle United, dribbling past opponents for the sheer fun of it, and exhibiting a wide repertoire of tricks and flicks that marked him down as a superstar in the making.

A £2.2m move to Tottenham – then a British record – facilitated this and prior to a career-threatening knee injury sustained in the 1991 FA Cup final it should not be forgotten how ridiculously good the midfielder was for the North London giants across several seasons.

He was on another level, regularly upsetting the football odds via audacious feats of magic.

It was with England though where the player’s star shone brightest, his tears in Turin during a World Cup semi-final in 1990 securing him a place in the nation’s heart, while his off-field antics prompted his Three Lions boss Bobby Robson to call him ‘daft as a brush’.

That tournament led to Paul John Gascoigne becoming ‘Gazza’ and for all of his rare footballing ability and achievements it is this that has come to define him most of all, making him a celebrity as much a sportsman and even now one of the most recognisable figures in the UK.

This overwhelming fame led to problems later in Gazza’s career. It also however, furnished him with enormous wealth.

Or at least it did at the height of his footballing powers, with an array of lucrative sponsorship deals and royalty payments dwarfing even his income accrued from 15-plus years playing at the highest level of the game.

To give one example of the latter, on joining Lazio in 1991, Gazza received a £2m signing-on fee, while a sweetener to head to Spurs instead of Manchester United three years earlier included the bequeathing of a house.

Elsewhere, there was a highly profitable boot deal with Adidas that reportedly amounted to another £2m, along with musical endeavours and numerous commercial partnerships that ranged from licensed merchandise to promoting crisps.

In 1999, a commitment to pen an autobiography brought in half a million pounds.

All told, by the player’s own admission, he amassed a fortune exceeding £20m, a figure that compares favourably with even the exorbitantly-paid footballers of today.

Sadly, the good times didn’t last with a much-publicised decline in depression and substance abuse severely effecting his earning potential. There was also a costly divorce bill as his marriage went the same way as his sporting genius.

In 2016, it was revealed that Gascoigne had voluntarily paid a £42,000 outstanding tax bill in order to stave off bankruptcy and though it is believed – and desperately hoped – that the beloved star has subsequently got his life back on track, his riches have long disappeared.

Residing in a small flat in Dorset, it was recently estimated that the 55-year-old has a net worth in the region of £75,000.

That was Gazza’s defiant response to losing his fortune, when his struggles were documented early in 2022 and though there have certainly been a series of regrettable episodes and terrible nadirs, the popular Geordie has also carved out some incredible moments that live long in the memory.

In typical Gazza fashion, these extremes often took place within the space of just a few weeks.

This was to be the midfielder’s farewell game for Spurs having already put pen to paper with Lazio and fuelled by the emotion of the occasion he charged about the pitch, looking frankly out of control.

In the 15th minute, Gazza dangerously lunged in on Nottingham Forest defender Gary Charles, rupturing a cruciate ligament in the process. He left the field in agony on a stretcher and was out of the game for over a year. 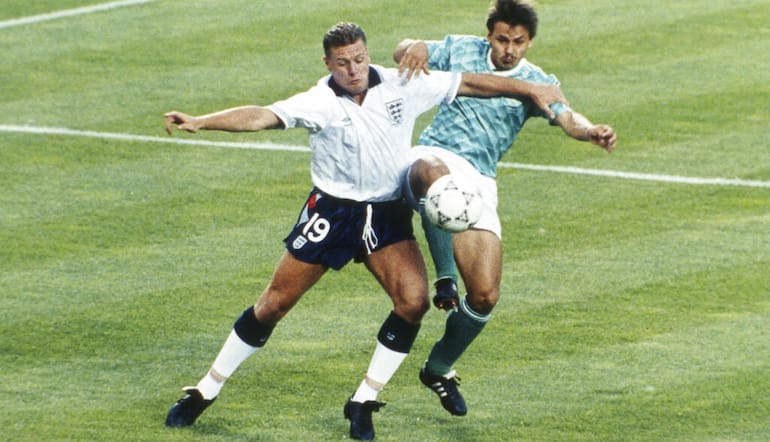 Yet a matter of weeks earlier, we witnessed the other side of this headline-making character when Spurs faced Arsenal in a North London semi-final held at Wembley.

With just minutes on the clock Tottenham were awarded a free-kick a full 35-yards out and only the most optimistic – or gifted – of players would attempt to beat England international goalkeeper David Seaman from that range.

Gazza’s thunder-blast soared into the top corner, leaving commentator Barry Davies to declare it one of the greatest free-kicks the famous old stadium had ever seen.

In an earlier round, the barrel-chested showman scored a wonderful individual effort and though the present-day Spurs are doing just fine at present, even tipped by some as potential title challengers for this season, what they wouldn’t give to have their former superstar in their ranks again in his prime.

Indeed, what we all wouldn’t give to see those runs and moments of impudent alchemy just one more time.

Gazza’s adventurous displays for the Three Lions at Italia ’90 made him an instant household name and helped transform the image of the game infinitely for the better in this country.

It was six years later however, at Euro ’96 when the player who was once called ‘George Best without brains’ really came up trumps.

Hosting the tournament, England were expected to do well, with Tony Adams at the back, Gazza pulling the strings, and one of the best Premier League strikers of all time, Alan Shearer up front.

A contrived media storm going into that summer though threatened to derail them, with Gazza among a small number of England players photographed drunk on international duty, having alcohol poured into their mouths while strapped to a chair.

Fast-forward to their group match against Scotland and the player enacted the perfect revenge, first scoring a memorable goal that has been replayed a million times since, and then celebrating by recreating the tabloid front page, improvising with a nearby water bottle.

In 1996, the footballer married Sheryl Failes, soon after adopting her two children Mason and Bianca. Bianca has subsequently made a successful career for herself in reality TV.

Regrettably, the marriage ended in 1999, with Sheryl later releasing a tell-all book that pulled no punches with its title – ‘Stronger: My life surviving Gazza’.

Like his half-sister, Gascoigne’s only biological son, Regan, born in February 1996, has also excelled on the small screen. Earlier this year, the 26-year-old won ITV’s Dancing On Ice, making his father proud into the bargain.