Who makes our starting 11 in a combined XI between Arsenal and Chelsea? Scroll down for our picks… 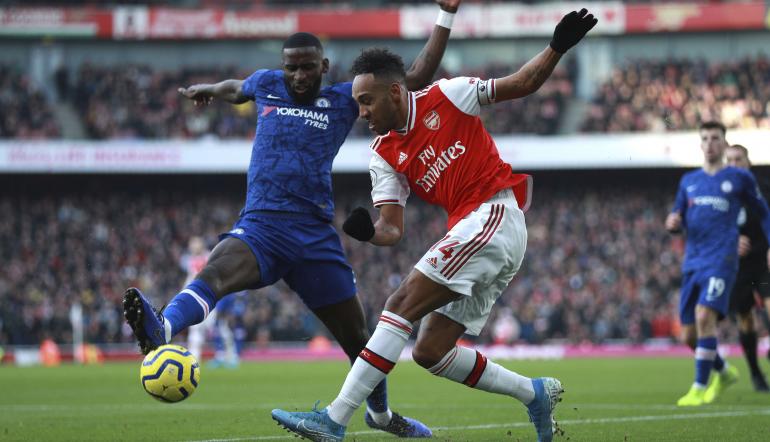 It would be fair to state that Arsenal and Chelsea have both underperformed this season. With eight defeats in 23 Premier League games, Chelsea are clinging on to a top four berth while Arsenal are languishing down in 10th position after a woeful campaign.

Both clubs are in desperate need of a confidence boost after failing to claim three points at the weekend and neutrals will be eyeing up the Premier League Odds ahead of what should be an exciting game at Stamford Bridge on Tuesday night.

Here, we’ve created a combined XI with the best players from both clubs. Chelsea dominate with seven players to just four from Arsenal but do you agree with our picks?

A tough choice at the goalkeeper position but probably for the wrong reasons. Leno and Kepa have hardly covered themselves in glory this season but the Arsenal man just about edges it.

Kepa has the worst save percentage in the Premier League, stopping just 55.4% of shots faced in 2019/20. Meanwhile, Leno is operating at 72% which is enough to put him in our Chelsea vs Arsenal combined XI.

At just 20 years old, James has already made a name for himself at Stamford Bridge. Likely to feature for England in the near future, James is one of the best full-backs in the Premier League on current form.

Chelsea have tied him down to a new contract that will keep him at the club until 2025. The Blues defender is easily our pick for the right-back position.

Arsenal and Chelsea are not exactly blessed with defensive talent but Rudiger is certainly the best of a bad bunch. Unfortunately, the Germany international has played just eight league games for Chelsea this season due to injury.

He is our choice to rank as the commanding marshal in defence. Rudiger is still improving and he could become a top defender in the coming years.

Alongside Rudiger, we are going with former Chelsea defender David Luiz. The Brazilian is by no means a lock for this spot in the team but he is arguably slightly more consistent than a few of the other contenders.

Luiz has been praised by new Arsenal manager Mikel Arteta in recent weeks and it wouldn’t be a huge shock to see the 32-year-old produce a solid performance against his former club.

Rightly or wrongly, we are shifting Zouma to left-back for the purposes of this Chelsea vs Arsenal combined XI. Such are the limitations of the conventional full-back options, Zouma is preferred to slot into the left-back role.

Zouma leads the team in aerial battles won (83) and clearances (84) and his presence at set-pieces alone gives him an advantage over some of his rivals.

Kante is Chelsea’s midfield general and he will also act as that for our all-Chelsea unit in this team. The Frenchman has shown versatility and an ability to adapt to different roles during Frank Lampard’s short tenure.

One of the most consistent players in the Premier League over the last five years, Kante is one of the first names on our Chelsea vs Arsenal combined XI.

Consistency has eluded Kovacic on more than one occasion this season but there is no denying he boasts immense natural ability. The Croatia star is one to watch as he continues to adapt to life at Stamford Bridge.

It was a tossup between Kovacic and Mason Mount for this place in the midfield but we are leaning towards the Croatian. There wouldn’t be much separating both players in football tips for this XI.

A calm and collected head in midfield, Jorginho makes Chelsea tick and he can be the ‘Paul Scholes’ for this combined Arsenal and Chelsea XI. His impact and influence since joining the Blues has been clear for all to see…

While some would say that Jorginho lacks physicality to play in the Premier League, he has shown mettle in midfield and he is the clear pick for this spot.

After a slow start to his Arsenal career, Pepe has started to find his feet in north London. He has yet to justify his hefty £72 million price tag but Gunners fans will be relatively pleased with his recent progress.

With two goals and an assist in his previous three starts, Pepe is starting to show why Arsenal were so desperate to sign him. He pips Callum Hudson-Odoi for us.

One of the most consistent strikers in world football, Aubameyang has been prolific during his Arsenal career. He is banned for Tuesday night’s clash and Gunners fans will be fearing the worst with Aubameyang on the sidelines.

An absolute shoo-in if the Premier League was to replicate an NBA All-Star game, the Gabon forward is one of the best in the business and is an absolute must for our XI.

Abraham has scored 13 goals in 22 Premier League games this season and the Blues striker deserves his place alongside Aubameyang here. In fact, some might say that on current form he is our Chelsea-Arsenal combined XI frontman.

Chelsea have had to rely heavily on Abraham this campaign but the youngster has stepped up to the plate. With Kane injured, could we see Abraham lead the line for England at Euro 2020?